Adequate hematopoietic progenitor cell collection is critical for autologous peripheral blood stem cell transplantation. Conventionally, patients with multiple myeloma are treated with high-dose cyclophosphamide and granulocyte colony-stimulating factor (G-CSF) or G-CSF alone to mobilize their peripheral blood stem cells. However, some patients exhibit insufficient stem cell recruitment in response to these regimens. Recently, plerixafor has been approved for coverage by insurance in Japan. Combination treatment with plerixafor and G-CSF is now a standard procedure. In addition, treatment with bortezomib and G-CSF results in efficient stem cell recruitment. On the basis of the results from mouse studies, we hypothesized that combination treatment with bortezomib ensures efficient mobilization and mediates in vivo purging of malignant cells. Therefore, we administered a regimen of bortezomib, G-CSF, and preemptive plerixafor to 10 patients with multiple myeloma, and analyzed its efficacy and safety. The median patient age was 68 years. We collected CD34-positive cells (median: 4.9×106/kg) in a single session of apheresis from all patients. We observed no obvious myeloma cell contamination in the collected product or serious toxicity during treatment and collection. After collection, we performed autologous peripheral blood stem cell transplantation and confirmed engraftment in all patients (median: day 10). We found that the regimen is safe and reliably facilitated the collection of sufficient autologous peripheral blood stem cells by apheresis from all patients in a single day. Despite the small patient group size, we conclude that the regimen is promising for safe and efficient collection of peripheral blood stem cells for autologous transplantation in patients with multiple myeloma.

For patients with transplant-eligible multiple myeloma (MM), high-dose chemotherapy with autologous hematopoietic stem cell transplantation results in a better progression- free survival than conventional chemotherapy, as described in clinical trials1. Conventionally, a regimen consisting of high-dose cyclophosphamide followed by granulocyte colony-stimulating factor (G-CSF) or G-CSF alone has been used to recruit peripheral blood stem cells (PBSCs) in patients with MM. However, some patients do not mobilize sufficient hematopoietic progenitor cells (HPCs) for transplantation. Musto et al. reported predictors for unsuccessful or sub-optimal HPC mobilization, which include advanced age, lenalidomide treatment, and severe toxicity in response to high-dose cyclophosphamide2. The use of plerixafor in combination with G-CSF improves mobilization compared with G-CSF alone or in combination with cyclophosphamide, and the plerixafor combination is recommended for a standard collection method3-5. However, even after using plerixafor, some patients still show poor mobilization. Furthermore, the possibility of tumor cell contamination of plerixaformobilized HPCs cannot be completely ruled out6,7. In fact, Morris et al. reported that the cumulative incidence of relapse after transplantation was higher in the plerixafor cohort than in the other regimen cohorts8.

A previous study reported that stem cell recruitment with bortezomib and G-CSF is efficient9. In this study, bortezomib was administered on days -11 and -8, followed by G-CSF on days -4 to -1, before HPC collection. The median circulating CD34+ cell count on mobilization day before plerixafor administration was 25.4 cells/μL, and two patients (11%) in the study received plerixafor9. The safety and feasibility of bortezomib in combination with G-CSF for PBSC collection have been demonstrated in a phase Ⅰ study10. In this study, G-CSF was administered for 5 days, and on the evening of day 4, a single dose of bortezomib was administered. The median circulating CD34+ cell count on mobilization day was 32 cells/μL without plerixafor administration10. Although there is a difference in the administration schedule of bortezomib, these two studies reveal that bortezomib in combination with G-CSF effectively mobilizes PBSCs. Combination therapy with bortezomib is expected to ensure therapeutic effects against MM and mediate in vivo purging due to the duration of proteasome inhibition in the peripheral blood11,12. Moreover, in a mouse model, plerixafor administration after bortezomib further enhanced HPC mobilization compared with the administration of either agent alone11.

We hypothesized that the addition of bortezomib to the standard plerixafor and G-CSF regimen would result in higher mobilization than the standard regimen alone, with the additional benefits of anti-myeloma and in vivo tumor purging effects. The enhanced mobilizing activity and tumor-purging effects of bortezomib are highly desirable for patients with MM. Based on these observations, the aim of our pilot study was to determine the safety and efficacy of a unique autologous PBSC collection regimen, comprising plerixafor administration, following treatment with bortezomib and G-CSF for blood stem cell mobilization in patients with MM.

We obtained Institutional Review Board approval from the Japanese Red Cross Fukuoka Hospital. All patients provided written informed consent in accordance with the Declaration of Helsinki. We analyzed the clinical outcomes in adult patients requiring their first PBSC transplant for newly diagnosed MM between April 2017 and March 2019 in our hospital.

The PBSC collection regimen is shown in Figure 1. The patients were then subcutaneously administered bortezomib ( 1.3 mg/m2) on days 1 and 4, G-CSF (10μg/ kg) for 5 consecutive days, and preemptive plerixafor (0.24 mg/kg) on the evening of day 4. We determined circulating peripheral blood CD34-positive cell counts on the morning of days 4 and 5. If the count was>20 cells/μL on the morning of day 4, we suspended the preemptive plerixafor (0.24 mg/kg) treatment. The collection goal was 2.0×106 CD34-positive cells/kg, based on the recommended adequate dose for one autologous hematopoietic stem cell transplantation13. If the goal was not met after 1 day of apheresis, we planned repeat G-CSF administration and apheresis.

The results of the cell collection procedures are shown in Table 1. The median CD34-positive cell yield was 4.9×106 cells/kg (range: 2.3-9.8×106 cells/kg). We acquired an adequate amount of cell from all patients (100%) with a single session of apheresis. We collected a sufficient amount of cells without plerixafor from 2 of the 10 patients (2.93 and 3.24×106/kg) because their CD34-positive peripheral blood cell count on the morning of day 4 had reached adequate levels before plerixafor administration.

Table 2 shows the adverse events in all patients. We evaluated the grade of the adverse events using Common Terminology Criteria for Adverse Events version 4 (https://ctep.cancer.gov/protocolDevelopment/electr onic_applications/ctc.htm). All patients had mild toxicities, no serious toxicities were reported during treatment or collection. The most common adverse event related to mobilization was back or musculoskeletal pain (50%). There were no grade 3 or higher toxicities, death, or treatment discontinuation due to adverse events. 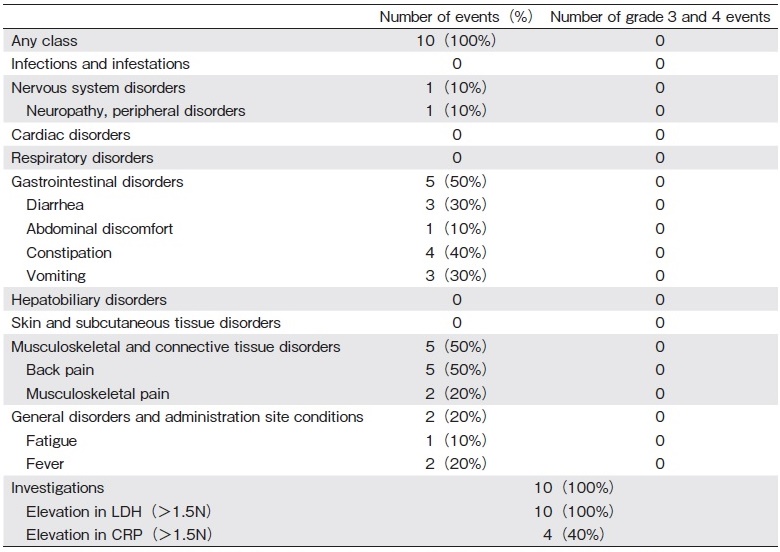 After conditioning with melphalan, all patients underwent autologous stem cell transplantation with their total cell products. After autologous stem cell transplantation, we confirmed rapid engraftment in all patients. The median days post-transplant to reach a neutrophil count of>500/μL and platelet count of>20,000/μL were 10 (range: day 9-11) and 12 (range: day 10-21), respectively.

The consensus of the American Society for Blood and Marrow Transplantation is upfront plerixafor is a suitable treatment option for all patients13. We demonstrated the efficacy of PBSC collection with preemptive use of plerixafor following bortezomib and G-CSF administration. The rate of successful HPC collection using our regimen was superior to that using G-CSF and plerixafor in patients with MM14. With strategies employed in previous studies, such as chemotherapy and G-CSF and G-CSF alone, a significant number of patients (15%- 30%) failed to mobilize an adequate number of stem cells15,16. With G-CSF+plerixafor therapy, the proportion of patients from whom>2×106 CD34-positive cells/kg were collected in 4 or fewer apheresis sessions was 88.3%14. Similarly, two other studies reported that for adequate cell collection, the median number of apheresis was 2 (range: 1-4) 3,4. Moreover, in a comparative cohort of Japanese patients, Yogo et al. reported that 17% of 63.8% patients who received lenalidomide did not yield more than 2.0×106 CD34+ cells/kg with a single apheresis session17. These revealed that the frequency of insufficient cell collection using G-CSF+plerixafor was 10%-20%. However, using our regimen, we collected sufficient amount of cells from all 10 (100%) patients with a single session of apheresis. The superior mobilization achieved with our regimen can be attributed to bortezomib administration. Bortezomib has been shown to function in the bone marrow microenvironment to inhibit the adhesion of HPC to bone marrow stromal cells18,19. Furthermore, HPCs were more mobilized in mice co-administered bortezomib and plerixafor11. Therefore, we expected that the administration of plerixafor and G-CSF simultaneously could mobilize more CD34-positive cells. To the best of our knowledge, only a few studies have shown that the simultaneous administration of these two drugs enhanced mobilization effect. Therefore, we added bortezomib on days 1 and 4 to a regimen comprising plerixafor and G-CSF, according to the convenience based on the logistics of the clinic.

A previous study reported that age, baseline low peripheral blood cell count, lenalidomide use, and hematological toxicity during induction were potential factors associated with poor mobilization under cyclophosphamide treatment2. In this study, the amount of CD34+PBSC cells (<CD34+ 2.0×106 cells/kg) from patients collected was not sufficient, 15.54% of whom were over 60 years old and 15.17% had a history of lenalidomide use. Considering that our patients were elderly individuals and had a history of treatment with four or more courses of lenalidomide, it is surprising that we were able to obtain enough CD34-positive cells in a single session of apheresis. The ability to collect a sufficient amount of cells in a single apheresis session may provide patients a sense of security and reduce the number of collections. We speculate that even if this regimen is used in a higher number of patients, it is likely that a single harvest will be sufficient, because our patients in this trial had a relatively higher risk of collection failure.

We suggest that the combination therapy of bortezomib and plerixafor might have enhanced therapeutic effects against MM. A recent phase I/II trial revealed that plerixafor in combination with bortezomib was safe, and yielded a high objective response rate even in patients with relapsed/refractory MM20. Moreover, we expected to observe a reduction in the number of circulating myeloma cells with bortezomib combination regimen based on long-lasting in vivo purging observed in mice12. We chose to add bortezomib on both days 1 and 4 due to its direct anti-myeloma effects.

The consensus of the American Society for Blood and Marrow Transplantation is the preemptive use of plerixafor based on peripheral blood CD34-positive cell measurements is reasonable13. We examined circulating peripheral blood CD34-positive cells on the morning of day 4. Yogo et al. reported PBSC mobilization in 67 patients who received G-CSF alone and G-CSF+plerixafor. The median CD34-positive cell count on days 4 and 5 in the G-CSF+plerixafor group was 6 and 38 cells/μl, respectively17. The median CD34-positive cell counts on days 4 and 5 in our patients were higher than those reported in this comparative cohort, especially on day 4. The higher values on day 4 might be because we added bortezomib on day 1. We indicate that the addition of bortezomib on both, day 1 and 4, induces PBSC mobilization. We suspended the administration of plerixafor in two patients on the morning of day 4 because we expected to collect enough CD34-positive cells without the treatment. Indeed, we collected adequate cells from both younger age and the better mobilization with bortezomib, administered on day 1, may explain adequate cell collection without plerixafor use.

In conclusion, we found that the combination of bortezomib, G-CSF, and preemptive plerixafor enhanced PBSC mobilization, minimized myeloma cells in the apheresis product, and presented a better objective response than G-CSF and preemptive plerixafor without bortezomib. Moreover, our results indicated that this regimen is reliable and tolerable, as patients experienced only mild toxicities. Thus, we propose a novel autologous PBSC collection regimen comprising bortezomib, G-CSF, and preemptive plerixafor for patients with MM. This method may be preferable to standard protocols, especially for patients who are expected to have a low apheresis yield. Given that we analyzed the results of a small number of patients, further investigation in a larger group of patients is required. Therefore, we are initiating a prospective phase II clinical trial with this mobilization regimen: FBMTG EMM17 (UMIN000028421). We will recruit approximately 50 patients and we expect more reliable results in larger group of patients.

We thank the medical staff who cared for the patients at the Japanese Red Cross Fukuoka Hospital. We would like to thank Editage (www.editage.com) for English language editing.