Methods: The subjects were 26 adults who underwent allo-HSCT at Hamamatsu University Hospital between August 2018 and October 2021. Early nutritional intervention was provided from the time of the decision to perform allo-HSCT to the time of discharge, and it incorporated regular QOL assessments. The analyzed indices were nutritional intake, anthropometric measurements, body mass index (BMI), grip strength, body composition analyzer (InBody S10) measurements, and blood laboratory values including transthyretin levels. QOL was assessed using the QLQ-C30 questionnaire of the European Organization for Research and Treatment of Cancer (EORTC) (version 3.0) and calculated according to the EORTC scoring manual. The indices were compared at pre-transplantation, 30 days post-transplantation, 60 days post-transplantation, and at discharge. The association between pre-transplantation nutritional status and QOL was examined.

The number of hematopoietic stem cell transplantations (HSCTs) performed in Japan has increased dramatically since 1990, and more than 5,000 HSCT procedures are now performed annually. The collection and analysis of data regarding complications and the course after HSCT have played an important role in improving HSCT outcomes worldwide1.

Patients with hematopoietic tumors have been shown to have lower QOL and health-related QOL (HRQOL) compared with the general population. Therefore, it is important to assess QOL at the beginning of treatment2. Allo-HSCT also has short- and long-term effects on QOL and physical and psychological health. Many patients experience significant mental distress after HSCT, and the treatment has a negative influence on QOL and systemic function3–8. In the basic guidelines for allo-HSCT at Hamamatsu University Hospital (hereafter our hospital), the patient remains in a clean room from pre-transplantation to discharge, and therefore receives treatment in a closed environment. This setting leads to a decrease in physical activity compared with patients admitted to a general hospital room.

Adverse physical symptoms are a general indicator of the physical domain of HRQOL9. It has been suggested that HSCT is associated with decreased psychological domains of HRQOL10, increased distress, anxiety, and depression11–15, and decreased health outcomes and survival16,17. Numerous studies have focused on the physical function of patients post-HSCT. A certain percentage of patients still suffer from long-term side effects such as chronic GVHD and do not reach pre-transplantation HRQOL levels at 2 years post-transplantation18. Others have reported that full recovery is a three- to five-year process8. We previously reported that nutritional management is necessary from the early stage, because nutritional status will deteriorate after transplantation even with Nutrition Support Team (NST) intervention19. As a result of this finding, we have implemented aggressive early (pre-transplantation) nutritional intervention as a new NST protocol. Patients who received this intervention had better QOL than those described in other reports20. However, few studies have focused on changes in QOL and nutritional care during hospitalization. Therefore, we analyzed the trends in nutritional status and QOL of allo-HSCT patients over time at our hospital. We hypothesized that a nutritional intervention protocol would improve the nutritional status and QOL of patients who had undergone allo-HSCT.

Of 30 adults who underwent allo-HSCT at our hospital between August 2018 and October 2021, 26 were enrolled in the study. Four patients who died during the observation period were excluded.

Nutritional management of patients with allo-HSCT

Figure 1 shows the nutritional management protocol implemented at our hospital for allo-HSCT patients. After obtaining the patient's final informed consent before allo-HSCT, NST intervention was initiated as soon as the transplant decision was made, and weekly conferences and rounds were held to monitor nutritional status and intake. As needed, we also suggested dietary modifications and considered changes and additions to the content of nutritional supplements and changes to the parenteral nutrition menu. The intervention was terminated at the time of discharge, after which the patient was followed up at an outpatient clinic. Detailed nutritional assessments were performed at pre-transplantation (pre-conditioning regimen), at 30 days post-transplantation, at 60 days post-transplantation, and at discharge. In principle, oral intake was continued until the time of discharge. In cases where diet alone was insufficient, nutritional supplements were added. At the time of discharge, dietary intake was by oral intake alone in all patients. 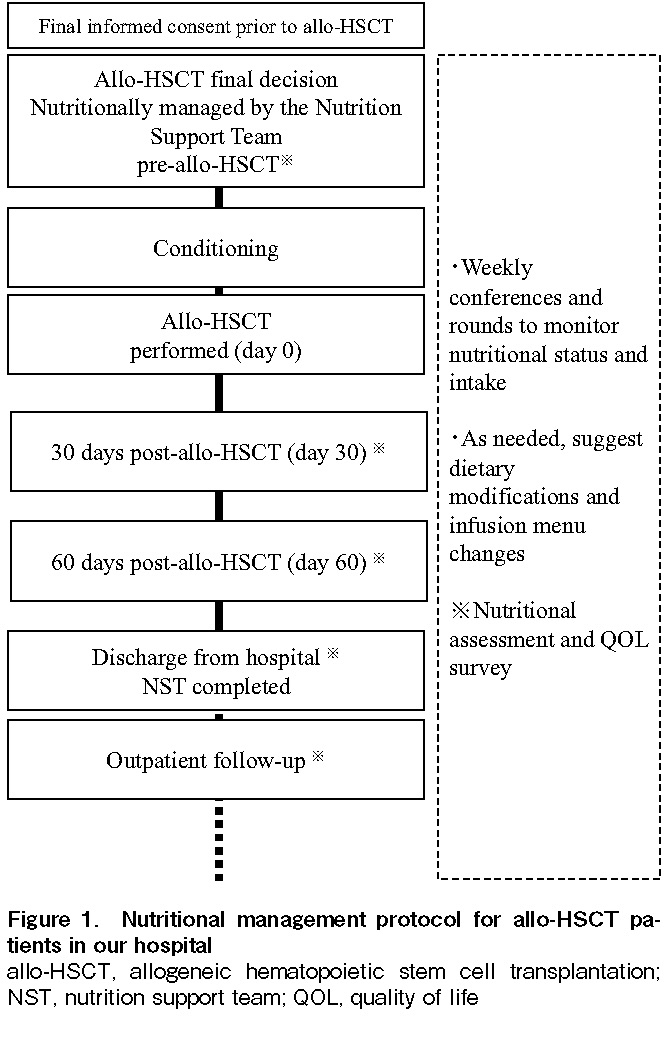 We used the QOL questionnaire of the European Organization for Research and Treatment of Cancer (EORTC) QLQ-C3021 (version 3.0). Specifically, the Japanese version of the EORTC QLQ-C30, which has been shown to be reliable and valid22, was used in the present study. Prior permission to use this questionnaire was obtained from EORTC and the developer of the Japanese version, Kojiro Shimozuma. The participants were asked to answer a total of 30 self-administered questions about their global health; five functional scales (physical functioning, role functioning, cognitive functioning, emotional functioning, and social functioning); and nine symptom scales (nausea and vomiting, fatigue, dyspnea, pain, insomnia, appetite loss, constipation, diarrhea, and financial difficulties). QOL scoring followed the EORTC scoring manual23. Higher standardized scores on the global health and functional scales indicated better status, whereas lower standardized scores on the symptom scale indicated better status.

Approval to conduct this study was obtained from the Ethics Committee of Hamamatsu University School of Medicine (Approval No. 18-077). Consent was obtained on an opt-out basis. 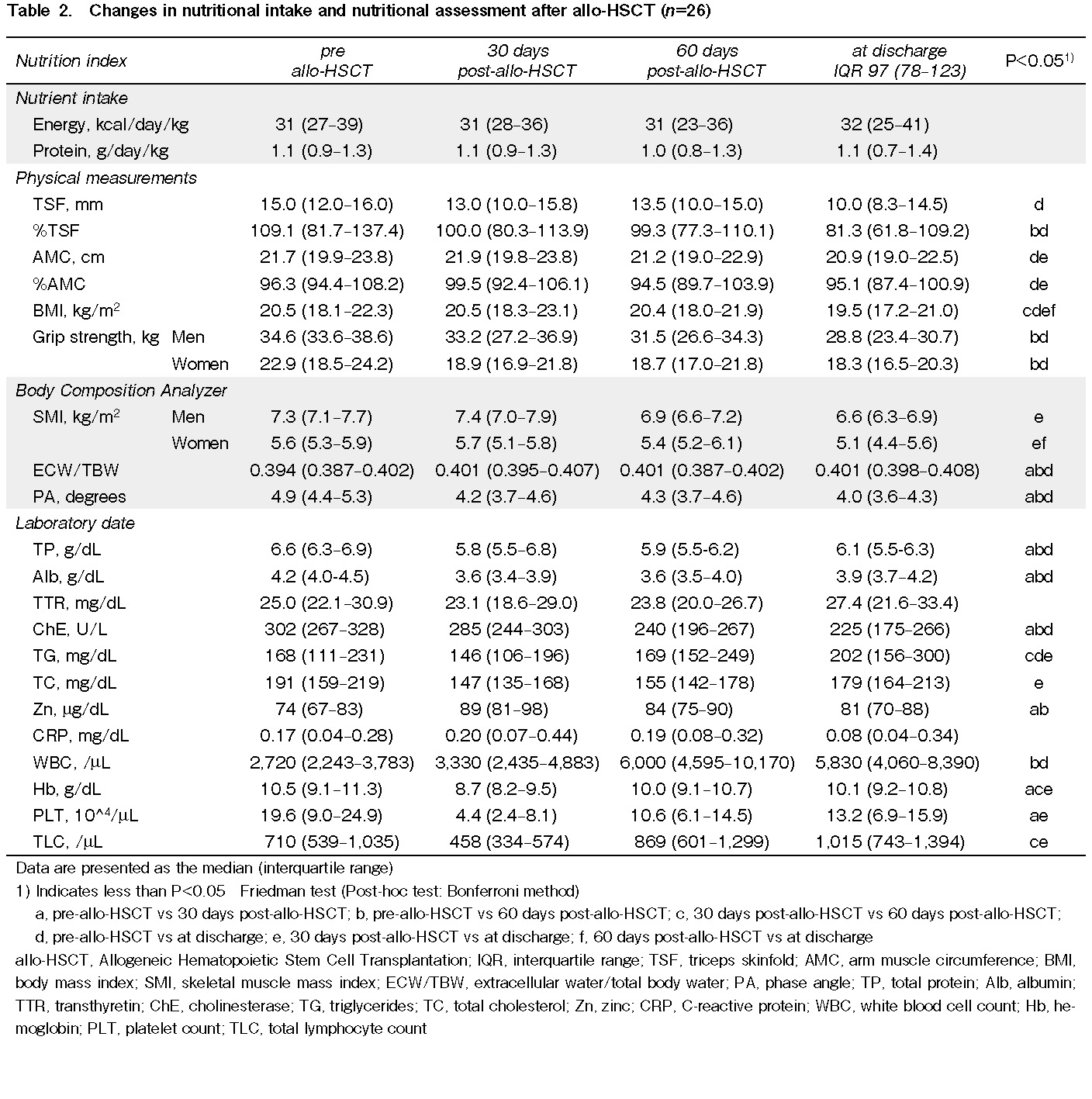 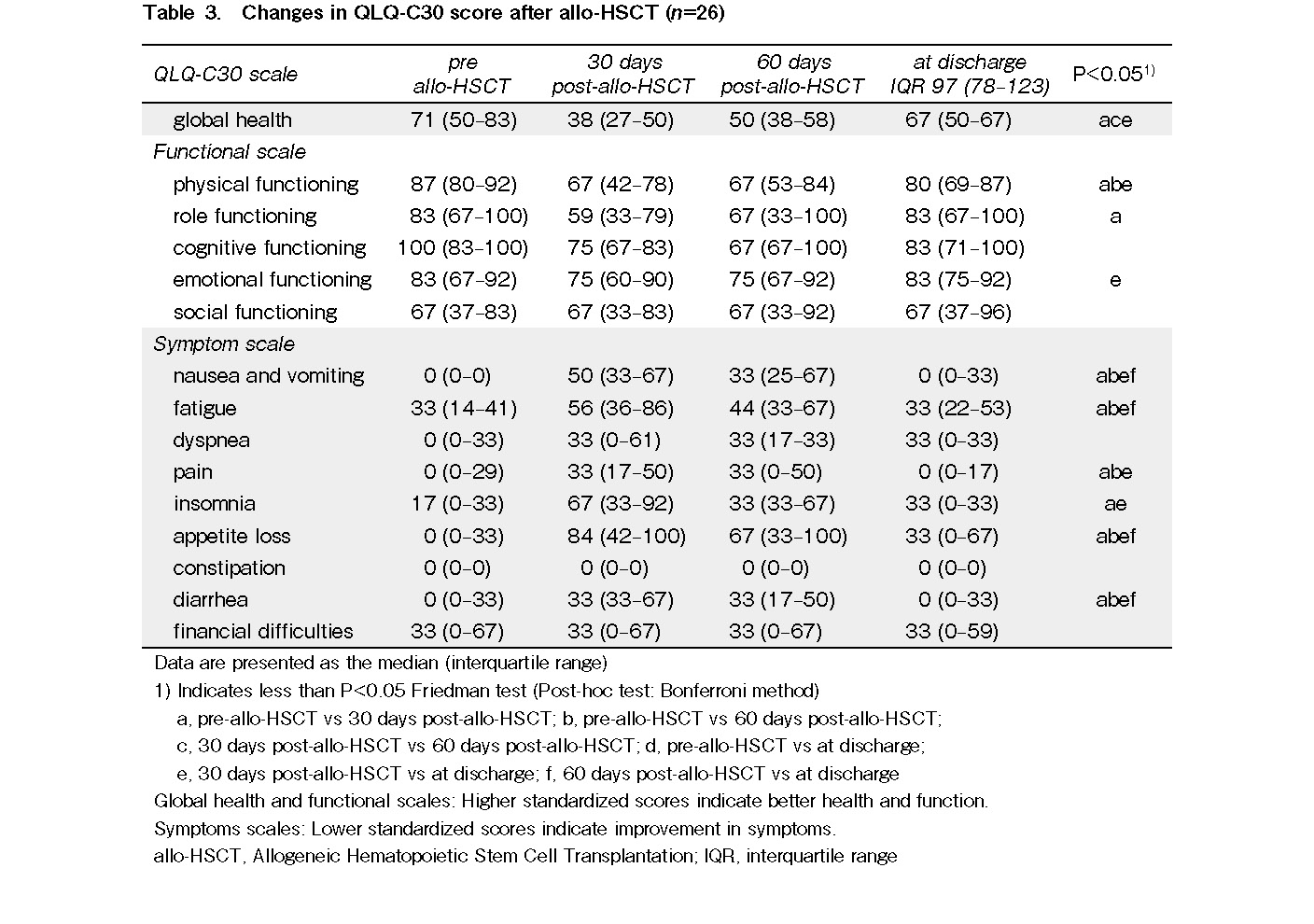 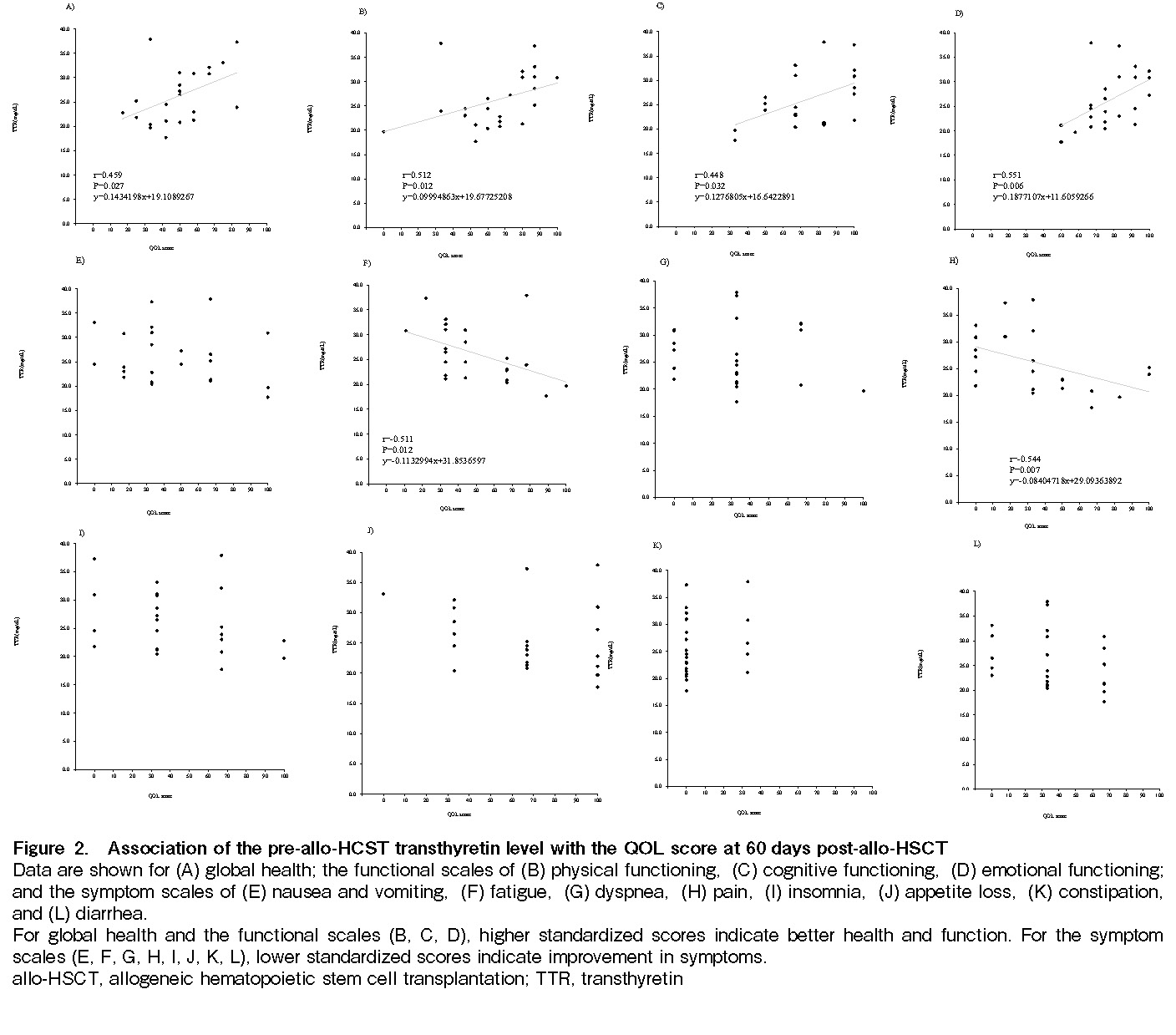 According to the Japanese parenteral and enteral nutrition guidelines25, nutritional management in HSCT is absolutely necessary because all patients undergoing HSCT are at nutritional risk. It is recommended that nutritional therapy should be started early, even if there are no nutritional disorders before treatment begins. The American Society for Parenteral and Enteral Nutrition guidelines26 also state that all patients undergoing HSCT are considered to be at nutritional risk and recommend that they undergo nutritional screening to develop a nutrition care plan and identify patients who require nutritional assessment. Furthermore, the European Society for Clinical Nutrition and Metabolism guidelines27 on nutrition for cancer patients recommend maintaining physical activity and ensuring adequate nutritional intake during pre-transplantation high-dose chemotherapy and post-HSCT. Therefore, nutritional management at pre-transplantation is important. Allo-HSCT involves a conditioning regimen with a combination of higher-dose and more intense chemotherapy and whole-body radiation than is commonly used. The risk of malnutrition after transplantation is high because adequate oral intake cannot be maintained due to the development of oral mucositis, nausea, vomiting, and diarrhea28. Reports on diet and its impact on post-HSCT complications are scarce; moreover, the focus has been primarily on nutrition immediately after transplantation29. In contrast, our NST provided early nutritional intervention to improve pre-transplantation nutritional status.

In this study, QOL was evaluated along with nutritional status. HRQOL assesses physical, psychological, social, and emotional functioning from the patients' experience and perspective, and it can identify individuals who may benefit from clinical interventions. An association has been shown between nutritional status and HRQOL outcomes in other cancer types, with malnourished patients reporting lower QOL than well-nourished patients30. The QOL scores of patients in our hospital were higher than those of patients before treatment for other cancers that were reported in a previous study20. QOL is an important metric that reflects the health status of cancer patients, and it is significantly impacted by nutritional factors31. However, there are no reports of the association of nutritional status and QOL in HSCT. In particular, QOL after allo-HSCT may be affected by acute and chronic GVHD, infections, and complications. In the present study, there was no bias in post-transplant QOL scores based on the presence or absence of acute GVHD or infection, but further study is needed to examine more cases. In addition, complications and chronic GVHD are factors that are inherently affected, and it is necessary to look at associations with these factors.

A limitation of this study is the small number of cases. Long-term observation after transplantation in a larger number of cases is required in further studies and may yield different results from those obtained in the present study. Since the present study was limited to inpatients, we are currently conducting long-term follow-up on an outpatient basis to evaluate the impact of nutritional management methods that combine early intervention and long-term follow-up on improving QOL.

The present findings indicate the importance of early nutritional management prior to transplantation, and they showed a trend toward better recovery of QOL scores after transplantation in patients who had received this intervention. Therefore, it is necessary to perform early intervention such as monitoring of nutrition and QOL scores pre-transplantation, as well as regular bilateral assessments long after discharge from hospital.

In conclusion, early nutritional management of allo-HSCT patients prior to transplantation allowed maintenance of nutritional intake, and higher pre-transplant transthyretin levels were associated with higher QOL scores at 60 days post-transplantation.

Approval was obtained from the Ethics Committee of Hamamatsu University School of Medicine to conduct this study (Approval No. 18-077).

Consent was obtained on an opt-out basis.