We describe the allele and haplotype frequencies seen in a volunteer unrelated bone marrow donor registry, a public cord blood bank, and donor/recipient samples processed by the Health Sciences Authority (HSA) in Singapore. Historical human leukocyte antigen (HLA) typing reports were anonymized and combined. They were checked for HLA typing nomenclature discrepancies or ambiguities using the HLA-net UNIFORMATE tool, and for analysis, the validated data were subsequently separated into Chinese, Malay, Indian, and Others, according to the race classification system used in Singapore. Individual ethnic allele and haplotype frequencies were calculated with the HLA-net GENE[RATE] pipeline using basic statistics. The Basic Statistics Tool of HLA-net was used to estimate haplotype frequency using an expectation maximization algorithm, given a set of multi-allelic data pairs for a given HLA locus. The outputs downloaded from the site comprised plain text files with haplotype frequency estimates, results of a global linkage disequilibrium test, and standardized residuals (stdres) corresponding to deviations from expected frequencies. HLA typing results from 59,186 individuals met the inclusion criteria, yielding 118,372 analyzable alleles. In our study population, the haplotype A*33:03-B*58:01-C*03:02-DRB1*03:01～DQB1*02:01:01G with a frequency of 4.91% was the most common. This haplotype was also the most common among Singaporean Chinese donors. Consistent with the predominant Chinese population, haplotypes with a frequency greater than 1% were also the most frequently observed haplotypes in the Singaporean population. In the Malay donor population, the most common haplotype was A*33:03～B*44:03～C*07:01:01G～ DRB1*07:01-DQB1*02:01:01G, with a frequency of 3.41%, whereas within the Indian donor population, the most common haplotype was A*01:01-B*57:01-C*06:02～DRB1*07:01-DQB1*03:03, with a frequency of 3.42%. Haplotype diversity and composition statistics within donor pools provide HLA background data required for the targeted recruitment of donors to support the hematopoietic stem cell donor requirements of the country. These data may be used in the future to devise donor recruitment strategies for optimizing the donor pool through targeted publicity and accruals.

Tissue matching for hematopoietic progenitor cell transplantation is based upon human leukocyte antigens (HLAs) minimally matched at HLA-A, B, C, DR, and DQ, although other variables may be taken into consideration when assessing the suitability of a potential donor.

In 2018, of the 19,630 allogeneic transplants reported to the European Society for Blood and Marrow Transplantation (EBMT) Registry, 31.8% were from matched family donors, 16.2% were haploidentical related donors, 49.1% were from volunteer unrelated donors (VUDs), and 1.4% were from unrelated cord blood units (UCBs)1. In the Asia-Pacific region, of the 17,572 allogeneic transplants performed in 2015, 37.8% were from related donors, 16.1% were from VUDs, and 8.6% were from UCBs2. Currently, the total number of donors and cords potentially available in the World Marrow Donor Association (WMDA) database is approximately 38,008,2913. In 2014, the National Marrow Donor Program (NMDP) demonstrated that approximately 75% of patients of European descent are likely to identify an 8/8 HLA-matched VUD; however, the rate is considerably lower for recipients of non-European descent, consistent with the observed lower VUD utilization within the Asia-Pacific region. This difference may be associated with the lower representation and poorer availability of VUDs from these populations in the worldwide VUD pool4, 5.

The Singapore population is largely derived from migrant populations who have settled over the past two centuries6. The CMIO (Chinese, Malay, Indian, Other) system for race categorization, which has been in use since around 1920, estimates that the composition of Singapore residents in 2020 comprised approximately 73.3% Chinese, 13.5% Malay, 9% Indian, and 3.2% Others7.

With the integration of different population gene pools over the decades, we believe that the Singapore population has unique HLA characteristics that hitherto have not been systematically described.

We herein describe the HLA allele and haplotype frequencies amongst UCBs and adult VUDs in Singapore. This information will potentially contribute to optimizing the size and ethnic composition of the donor pool and improve the probability of finding local donors for local patients8–13.

In this descriptive study, we utilized historical de-identified and unlinked HLA typing data that had accrued in the period between January 1st 2005 and June 1st 2020 from healthy VUDs recruited by the Bone Marrow Donor Programme (BMDP), cord blood units collected by Singapore Cord Blood Bank (SCBB), and recipient/donor samples processed by the Health Sciences Authority (HSA).

During the accrual period, the BMDP and SCBB study populations were typed at high resolution based on next-generation sequencing.

The HSA study population was genotyped up to the second-nomenclature field with sequence-specific primers using One Lambda Micro SSP Allele Specific Trays and sequence-based typing (SBT) using Secore SBT, targeting exons 2 to 4 for Class I and exons 2 to 3 for Class II. Using the available family data, the haplotypes were deduced by comparing the group of HLA alleles inherited from each parent. Only families with four haplotypes were included.

HLA typing data and ethnicity of the VUD/UCB were exported from the respective databases. These data were unlinked and contained no identifiers, and thus there was no likelihood of identifying individuals. High-resolution results were obtained from 59,186 individuals.

HLA typing data from BMDP, SCBB, and HSA were combined and checked for discrepancies or ambiguities in HLA typing nomenclature using the HLA-net UNIFORMATE tool (). The validated data were subsequently separated into Chinese, Malay, Indian and Others for analysis.

The five-locus data (HLA-A, HLA-B, HLA-C, HLA-DRB1, and HLA-DQB1) were converted into a valid UNIFORMAT file format14. Individual ethnic allele and haplotype frequencies were calculated by uploading the UNIFORMAT file onto the HLA-net GENE[RATE] pipeline15 using the Basic Statistics Tool (), which uses an expectation maximization algorithm to estimate haplotype frequencies, assuming a Hardy-Weinberg equilibrium, given a set of multi-allelic pairs for a given HLA locus.

A circular graph (Figure 1) showing the linkage disequilibrium (LD) between the top 223 observed alleles was downloaded as part of the output from HLA-net. The thickness of the linkage represents the observed haplotype frequencies between two alleles. The color of the linkages denotes the standard residual of the LD, which measures the difference between the observed and expected linkage frequency using the chi-square test. 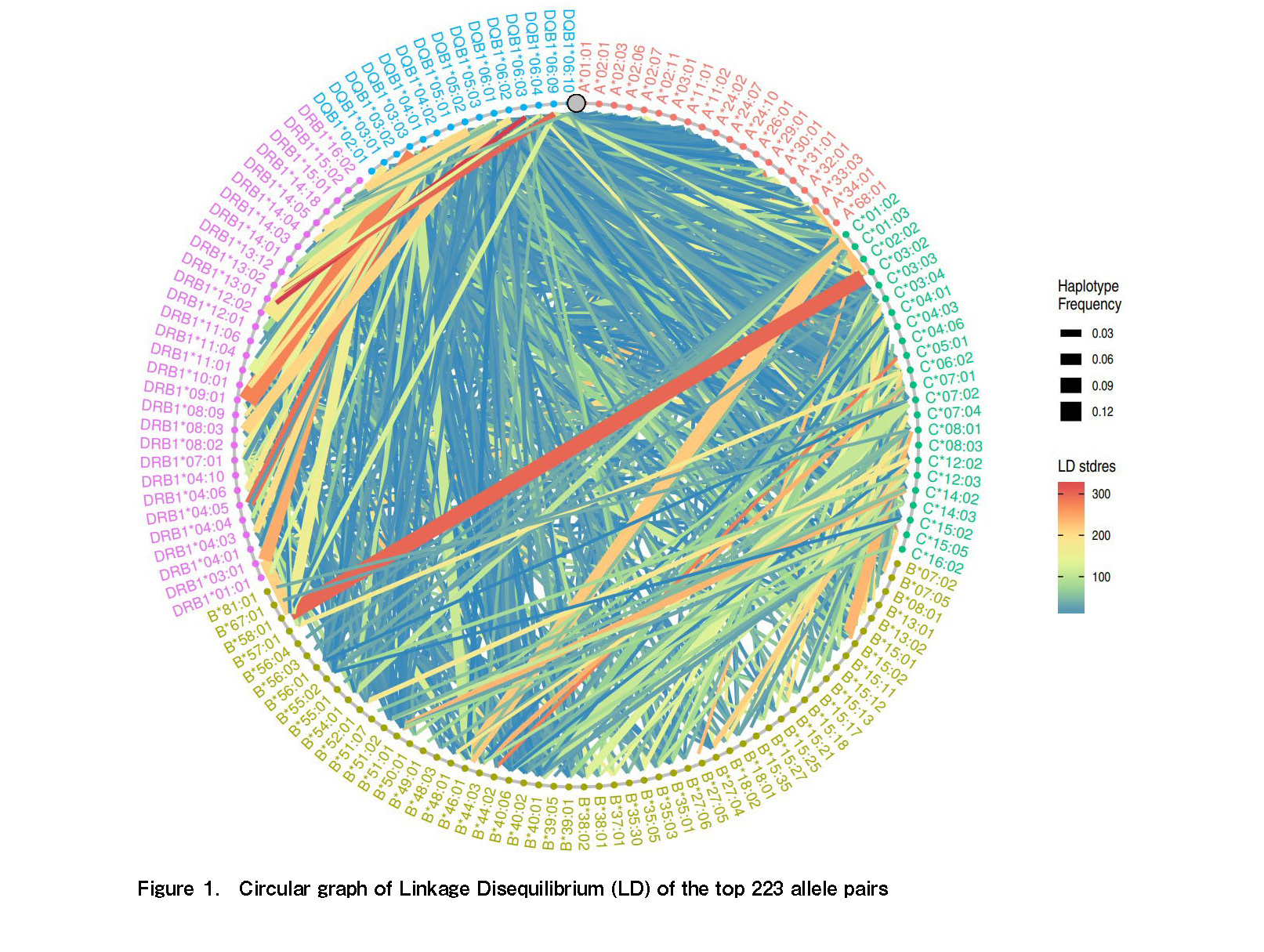 Haplotypes that had estimated frequencies of less than 0.01% were excluded when determining the N value for the total population and for each CMIO population.

The top 20 HLA alleles and haplotype frequencies that best represented each of the CMIO populations were selected. A heatmap was generated using the ggplot package16 in Rstudio17. Hierarchical clustering of the alleles and haplotypes was performed using the hclust package18 with the Pearson distance measure and average (UPGMA) agglomeration method.

HLA typing results from a total of 59,186 individuals and cord blood units previously typed at high resolution at the HLA-A, HLA-B, HLA-C and HLA-DRB1 and HLA-DQB1 loci were included in the analysis. 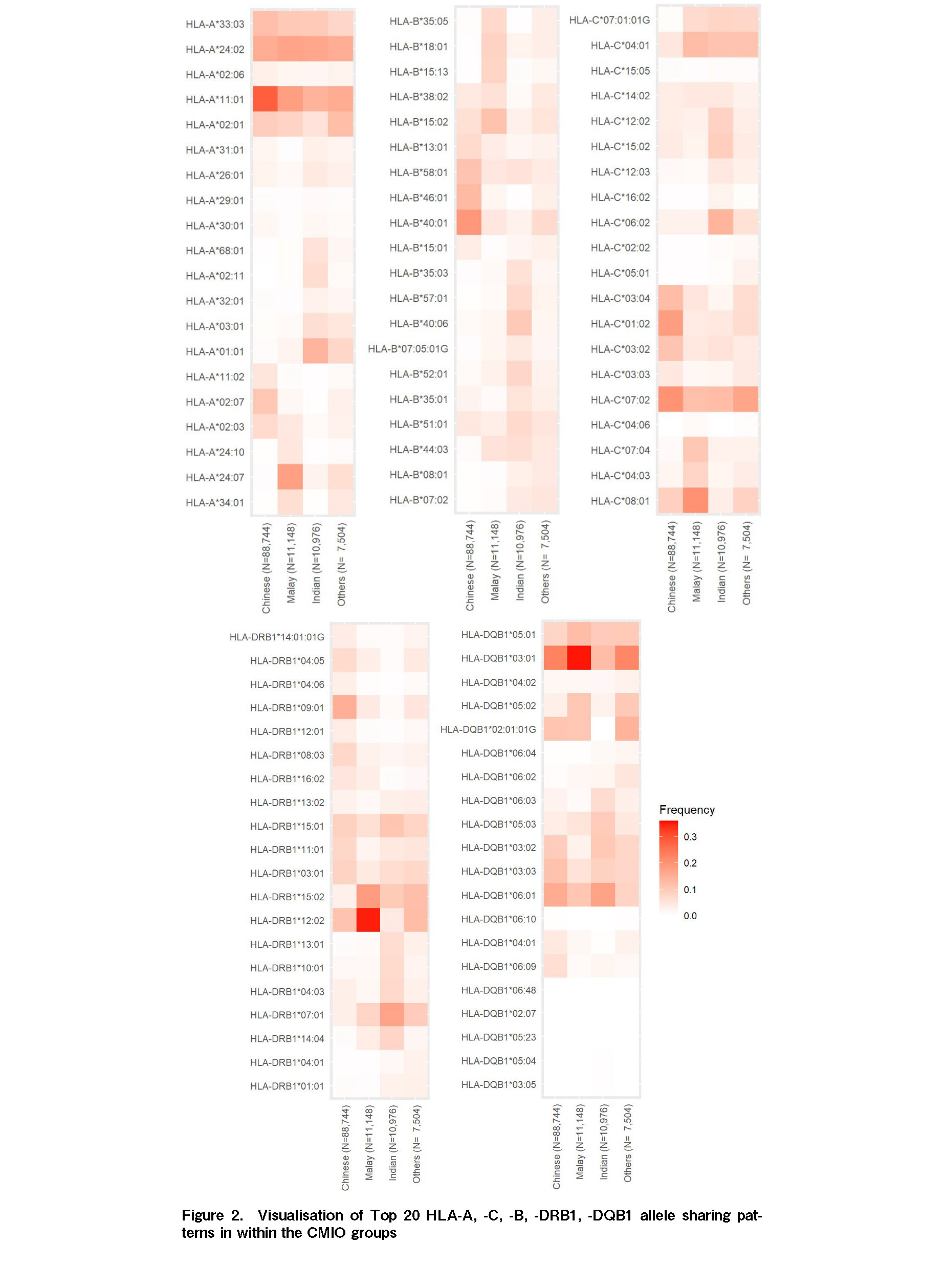 The B*58:01 and C*03:02 allele pairs were identified as having the highest frequencies, with the largest LD standard residuals among all 223 allele pairs. We also observed that the DRB1 and DQB1 allele pairs had moderate LD. Most of the other allele pairs showed smaller LD values.

Comparisons of the estimated haplotype frequencies and the known haplotypes reveal a reasonably good concordance between the top 20 haplotypes for the entire CMIO and the Chinese cohort (). However, consistency was less apparent within the Malay, Indian, and Other populations, which we assume to be attributable to the smaller sample sizes available for validation (). The known haplotypes determined by family studies were not part of the study cohort.

Table 1 presents a comparison of the frequency distribution of the top 20 most common haplotypes across the categorized racial groups, and Figure 3 shows a heatmap visualization of these haplotypes. 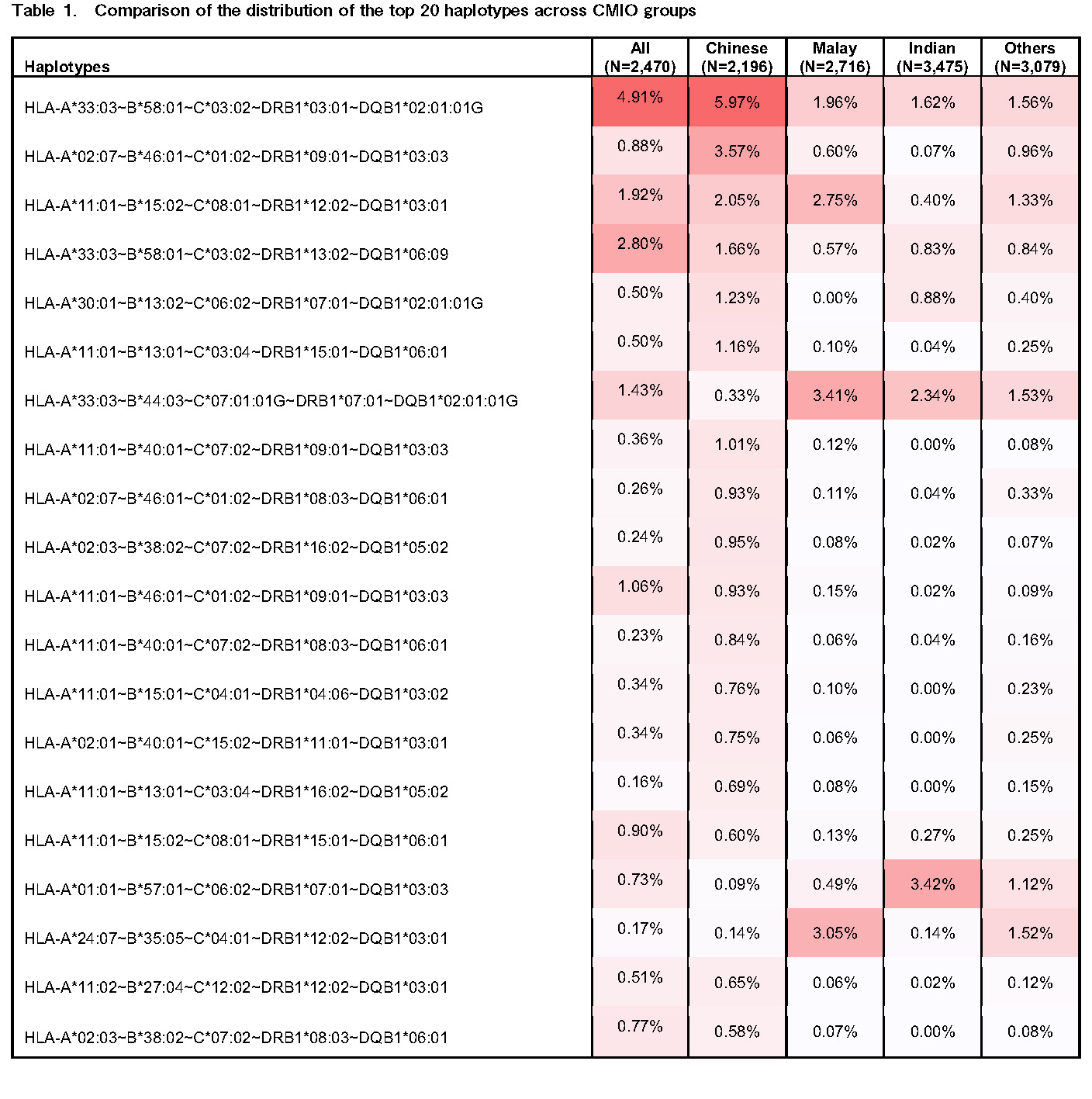 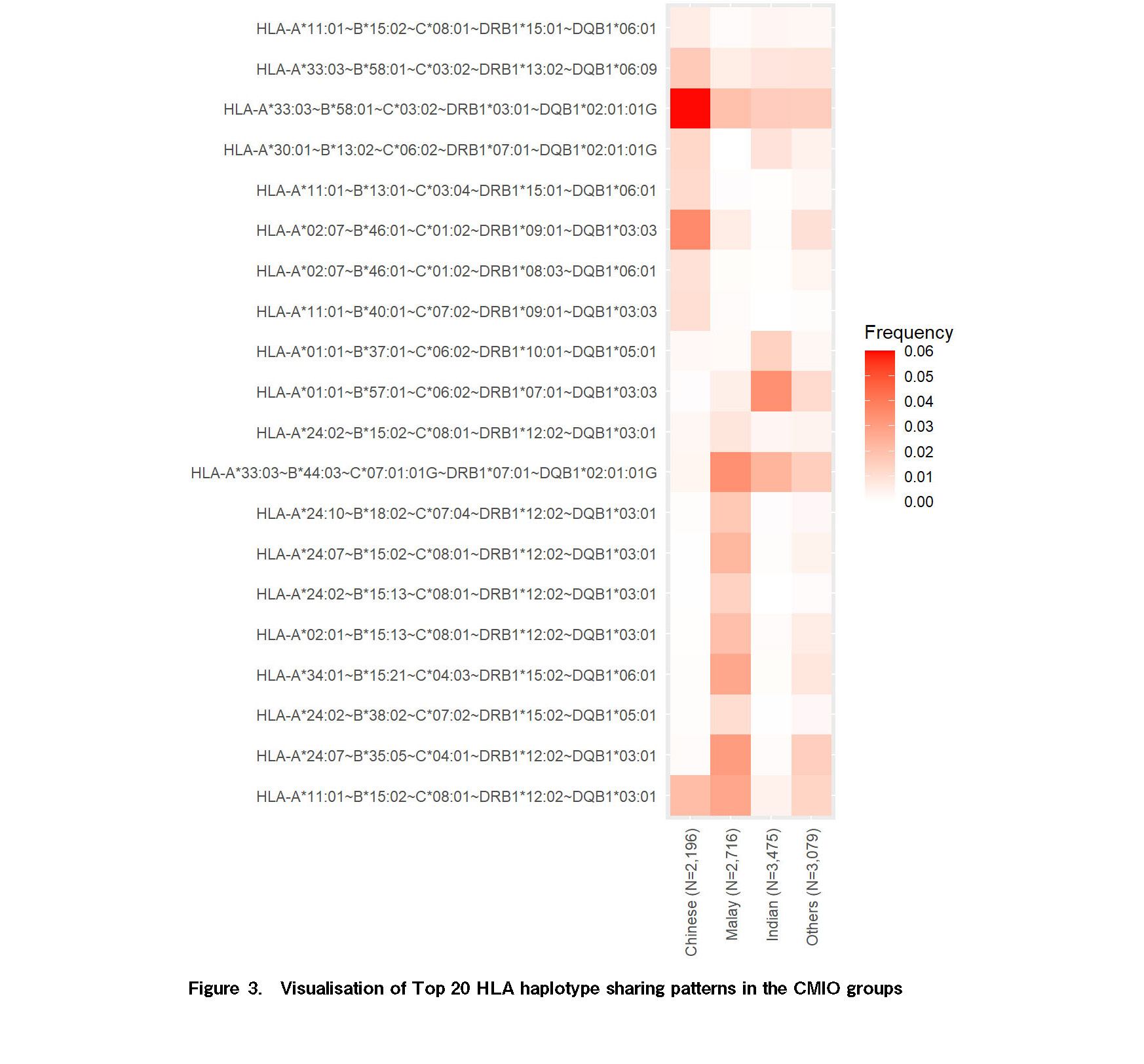 To the best of our knowledge, this is the first report describing the high-resolution HLA allele and haplotype frequencies detected at five loci within a volunteer adult hematopoietic stem cell donor pool and cord blood units in Singapore, based on data obtained from approximately 60,000 donors.

The four population groups assessed in the present study were found to have a number of frequently occurring haplotypes in common, thereby indicating either an admixing of the gene pool over time across the populations or a suboptimal classification system.

The Chinese-Malay-Indian-Others (CMIO) model is the most commonly used descriptive framework for ethnicity in Singapore. In Singapore. genetic distances due to the ethnic mixtures are indistinctly defined, as ethnic identification generally follows paternal ethnicity. For example, the Peranakan ethnic group (mixed Chinese and Malay/Indonesian) are regarded as being of Chinese heritage. Similarly, the Singaporean Eurasians (mixed Singaporean and Europeans) are generally defined by their Singaporean ethnicity (i.e., Chinese, Indian, or Malay). In 2010, a double-barrelled ethnicity category was introduced, which thereby offered children of mixed-ethnicity marriages the option of including both races in their classification. For more precise assignments, future donors could be asked for information regarding the ethnicities of both parents and grandparents.

Currently, potential transplant recipients from the Malay and Indian communities experience particular challenges with respect to the availability of suitable VUDS and UCBs, which can be attributed to an under-representation of their haplotypes in local donor pools and accredited international registries. Although advances in transplant technology have resulted in a significant increase in the utilization of related haploidentical donors in hematopoietic stem cell transplantation, the evolving family demographics suggest that VUDs and UCBs will remain an important option for potential hematopoietic progenitor cell transplant recipients.

ANYJ performed the statistical and haplotype analyses. All other authors contributed anonymized data and participated in the preparation and approval of the manuscript.

Studies involving the analysis of unidentifiable data did not require a review by our institutional review board. Informed consent was not required for the same reason.