Methods: This study aimed to evaluate adherence to recommended surveillance in allo-HCT survivors at an academic center in North India and study the incidence of late effects. This single-center, retrospective study analyzed records of allo-HCT recipients from 2016 to 2020. Survivors were screened in our LTFU clinic at day +100 and +365 using cardiometabolic parameters (screening for hypertension, dyslipidemia, hyperglycemia, 24-hour urine protein, thyroid function), pulmonary function test (PFT), bone mineral density (BMD), and initiation of revaccination.

Conclusion: The adherence to recommended surveillance measures for allo-HCT survivors in an academic LTFU clinic at one year was only 75% overall. Cardiometabolic abnormalities were noted in more than half of the survivors. This study emphasizes the need for a structured LTFU clinic in all centers performing HCT.

It is well known that the life expectancy of allo-HCT survivors is lower than the general population due to several late side effects1. There are international consensus guidelines for recommended screening and preventive practices for LTFU care of HCT survivors2. However, adherence to these guidelines in settings and poor health literacy represent unique challenges. More than 100 transplant centers perform approximately 1,500 allogeneic allo-HCTs in India annually3. These numbers have doubled over the last five years. While only a few of these centers (<5%) are publicly funded academic medical institutions, most exist in the private sector in major metropolitan cities. Most centers have existing infrastructure according to the requirements recommended by the Worldwide Network for Blood and Marrow Transplantation for running an acute care HCT program4. However, data on India's long-term follow-up (LTFU) care for HCT survivors is lacking. A recent survey from the Indian Society for Blood and Marrow Transplantation (ISBMT) that only 47% of transplant physicians reported adherence to revaccination protocols after HCT5. Our center is an academic institute of national importance under the Ministry of Health in North India, with a recently established LTFU clinic. We conducted a retrospective analysis to study adherence to recommended screening measures and the incidence of late effects of allo-HCT in a real-world setting.

Our center is a 10-bed HCT center performing 50-60 autologous+allo-HCT since 2008. The LTFU clinic was started in 2016 and is run weekly by a team of faculty members, senior residents, and medical social workers in liaison with other specialists when needed. Allo-HCT survivors are evaluated in our LTFU clinic at day +100 and +365 and annually thereafter for late effects according to international guidelines2. The institutional ethics committee cleared the study. The medical records up to one-year post-HCT of all consecutive patients who underwent allo-HCT from April 2016 to December 2020 were analyzed. The parameters analyzed were cardiometabolic surveillance (screening for hypertension, dyslipidemia, hyperglycemia, 24-hour urine protein examination, thyroid function), pulmonary function test (PFT), bone mineral density (BMD) by dual-energy X-ray absorptiometry (DXA) scan, and initiation of revaccination. As most patients in our cohort were pre-menopausal women and men <50-years, Z-score −2.0 were used to define below the expected range for age' as per the recently updated International Society for Clinical Densitometry (ISCD) adult official position6. The patients were asked to monitor blood pressure and blood glucose levels at home and report them during their visit to the clinic, whereas all the other parameters were tested in laboratories either in our center or in private testing centers. Since this study reports adherence up to only one year of follow-up, a second cancer screening was not reported.

Of the 80 patients who underwent allo-HCT at our center during the study period, 60 and 40 survivors were eligible for the day +100 and +365 follow-up, respectively (Table 1). The median follow-up duration of the survivors was 888 days (IQR: 515-1,306 days). No patients were lost to follow-up in our cohort. The cohort's median age was 24 years (IQR, 18-39 years), and there was a male preponderance (n=57, 71%). The most common indication for transplantation was leukemia (n=50, 63%), followed by aplastic anemia/primary immunodeficiency (n=16, 20%), and myelodysplasia/ neoplasms (n=14, 17%). The source of stem cells was matched related donors (n=43, 54%), followed by haploidentical donors (n=29, 36%), and matched unrelated donors (n=8, 20%). Myeloablative conditioning was used in 55% of the patients, and non-myeloablative/reduced-intensity conditioning was used in 45%. Total body irradiation was used in 44% (n=35) of patients. The incidences of acute graft-versus-host disease (GVHD) and chronic GVHD in day +100 and survivors were 40% and 53%, respectively. All patients with GVHD in our cohort received systemic immunosuppression therapy. 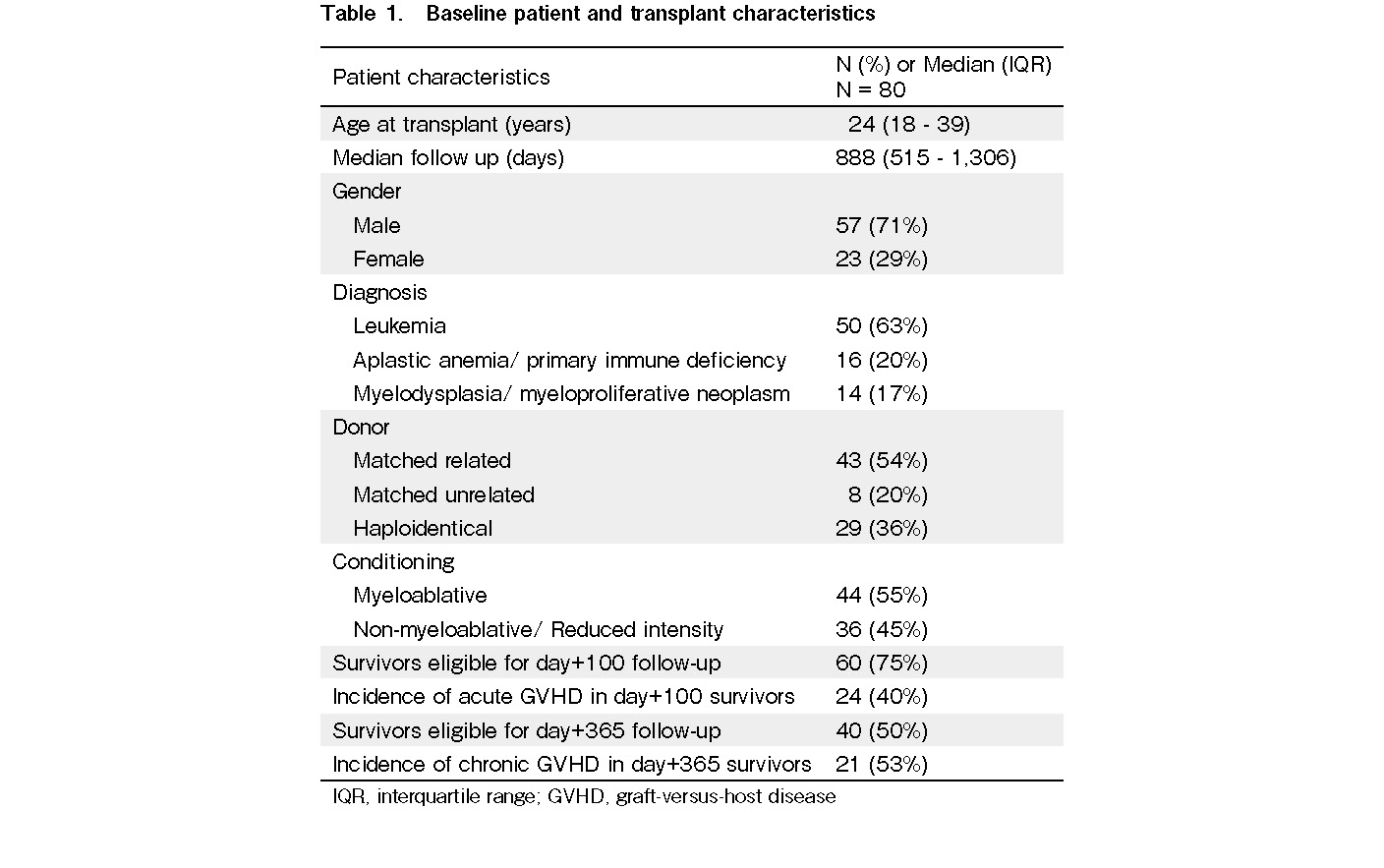 Adherence to home-based screening parameters, including blood pressure and blood glucose, was >75% at both day +100 and +365 (Table 2). The adherence to other lab-based cardiometabolic screening parameters varied from 45% to 70% at each time point. The adherence to specialized lab-based tests, such as PFT, was the lowest at under 50% at either time point. The adherence to the DXA scan for bone density was relatively high (76% at day +100 and 64% at day +365). Adherence to the initiation of revaccination on day was only 68%. Dyslipidemia is the most common abnormality. The incidence rates of dyslipidemia on days +100 and +365 were 67% and 60%, respectively. This was followed by low bone mineral density, with 30% and 43% of reports out of range at day +100 and +365, respectively. Overall, 68% of the eligible patients had at least one out-of-range screening test on day , with 55% having at least one out-of-range cardiometabolic parameter. The incidence of out-of-range tests increased to 80% on day +365, with 63% of survivors having at least one out-of-range cardiometabolic parameter.

Data regarding adherence to LTFU care of allo-HCT survivors are scarce in the literature, specifically from resource-challenged regions. In a recent American Society for Blood and Marrow Transplantation (ASBMT) online survey of transplant centers in North America, only 45% had a dedicated LTFU clinic. Lack of expertise, logistics, financial issues, and practitioners' preference to provide survivorship care are obstacles to establishing new LTFU clinics7. The median adherence to LTFU survivorship care recommendations in resource-rich settings beyond two years post-HCT was 75%8. This study identified autologous transplant, concerns about costs, non-white race, male sex, lower physical functioning status, absence of chronic GVHD, longer time since transplant, and lack of knowledge regarding the recommended tests as factors associated with poor adherence. In a recent study from Japan, only 5.8% failed screening in an automatically ordered electronic health record system. The reasons cited were equally distributed between no patient consent, physician decision, or forgot to order9. There are no data on how many transplant programs in India or resource-challenged settings have LTFU clinics. Being in an academic center at an institute of national importance, we had the resources and motivation to run a structured LTFU clinic for the past five years. Despite this, the overall adherence to LTFU survivorship care at one year was 75%. Adherence in centers without LTFU clinics in the rest of the country could be even lower. Although the factors for nonadherence were not addressed in this short-term follow-up study, poor health literacy may be one of the reasons. The fact that adherence to home-based screening was the highest, followed by lab-based and specialized tests, shows that this could also be due to ease of access. The concurrent implementation of a prospective study and clinical trial in our department (CTRI/2019/04/018764) accounts for the high adherence to BMD monitoring10. The current data show that at least 80% of the study population could benefit from the monitoring schedule because at least one actionable out-of-range parameter could be identified. Although our patient numbers were small and the follow-up was short to demonstrate any effect on morbidity and mortality, several extensive studies have established a relationship between cardiovascular events in HCT survivors with metabolic syndrome11. The Indian population is also otherwise at a higher risk of cardio-metabolic and bone health complications than other ethnicities12,13. The data from this study may not reflect other centers across the region without established LTFU clinics and survivorship care protocols. Overall, the current study reinforces the need to establish a systematic LTFU clinic and protocol in transplant centers, even in resource-challenged settings. A patient-centered approach using a personalized survivorship care plan (SCP) and digital health can improve adherence to recommended surveillance measures in India (CTRI/2021/08/035686).

The study was partly funded by the American Society of Hematology (ASH) Global Research Award to DPL.

The study was cleared by the intuitional ethics committee of Postgraduate Institute of Medical Education and Research, Chandigarh, India, INT/IEC/2021/SPL-982.

Informed consent was obtained from all participants included in the study.