Administration of mesenchymal stromal cells (MSCs) represents a promising therapy for steroid-resistant acute graft-versus-host disease (aGVHD). However, its efficacy in pediatric patients with steroid-dependent aGVHD remains unclear, given the paucity of studies performed in children. In addition, the duration between the onset of aGVHD and MSC therapy is reportedly critical; a delay in MSC administration negatively impacts overall survival and response rate. Herein, we describe a case of a 14-year-old girl with steroid-dependent aGVHD who was successfully treated with MSCs following a prolonged duration from aGVHD diagnosis. The patient was diagnosed with T-cell lymphoblastic leukemia with central nervous system involvement and underwent cord blood transplantation (CBT). She developed severe gastrointestinal aGVHD on day +14 after CBT and was treated with a steroid; however, her aGVHD was repeatedly exacerbated upon tapering the steroid, later complicated by diabetic ketoacidosis. We eventually implemented MSC therapy for steroid-dependent aGVHD on day +109 after CBT. She rapidly responded to therapy, and her aGVHD was ameliorated even with steroid tapering. This case exemplifies the potential role of MSCs in treating pediatric patients with steroid-dependent aGVHD or late aGVHD.

Mesenchymal stromal cells (MSCs) are multipotent fibroblast-shaped cells isolated from various tissues, including bone marrow, adipocytes, and umbilical cord blood. MSCs also play an important role in maintaining the bone marrow microenvironment and modulating inflammatory reactions. The application of MSCs in medicine has been widely investigated, and MSC therapy has recently been proposed as a promising procedure for steroid-resistant acute graft-versus-host disease (aGVHD). Previous studies assessing MSC therapy for steroid-resistant aGVHD have reported response rates of 60 to 80% in children1. In Japan, bone marrow-derived MSCs have been commercially available since February 2016, and their use has gradually increased in adult patients and children. However, few large studies have investigated the efficacy of MSC therapy in children. Therefore, no consensus has been established concerning the benefits of MSC therapy in pediatric patients with steroid-dependent aGVHD. Furthermore, the impact of the duration between the onset of aGVHD and MSC treatment on clinical responses remains controversial.

Herein, we report a case of steroid-dependent aGVHD that responded to MSC administration over 100 days after hematopoietic cell transplantation at our institution.

We adopted a reduced-intensity conditioning regimen comprising fludarabine (150 mg/m2), melphalan (140 mg/m2), and total body irradiation (3 Gy). GVHD prophylaxis consisted of cyclosporine (CSA) and methylprednisolone. Engraftment was achieved on day +13. However, the diarrheal stools increased to 1,373 g/day, with worsening abdominal pain necessitating opioid therapy. Thus, she was diagnosed with stage IV gastrointestinal aGVHD. Prednisolone (PSL) was administered at 1.5 mg/kg/day, and CSA was switched to tacrolimus on day +14. Diarrhea gradually improved, and the steroid dose was tapered and stopped on day . However, nausea, vomiting, and watery diarrhea reappeared, and 1.0 mg/kg PSL was reinitiated on day . Gastrointestinal aGVHD was temporarily resolved but recurred after reducing PSL (0.5 mg/kg) on day . Eventually, PSL was increased to 1.5 mg/kg/day. However, diabetic ketoacidosis (DKA) developed on day +92. Intensive treatment ameliorated DKA, and PSL was tapered to 0.5 mg/kg/day on day +106. Nonetheless, gastrointestinal aGVHD was exacerbated again; this was the third deterioration during steroid tapering. Accordingly, a diagnosis of steroid-dependent aGVHD was established. We employed MSCs as second-line therapy, and Prochymal (TEMCELLⓇ) was administered twice weekly for 2 weeks at 2×106 cells/kg from day . Gastrointestinal GVHD began to ameliorate, completely resolving after an additional MSC course (twice weekly for 2 weeks) despite PSL dose tapering. The patient was discharged on 0.25 mg/kg/day PSL on day +154. Figure 1 shows the clinical course of the patient. She is currently in good health with no further treatment and no evidence of GVHD. 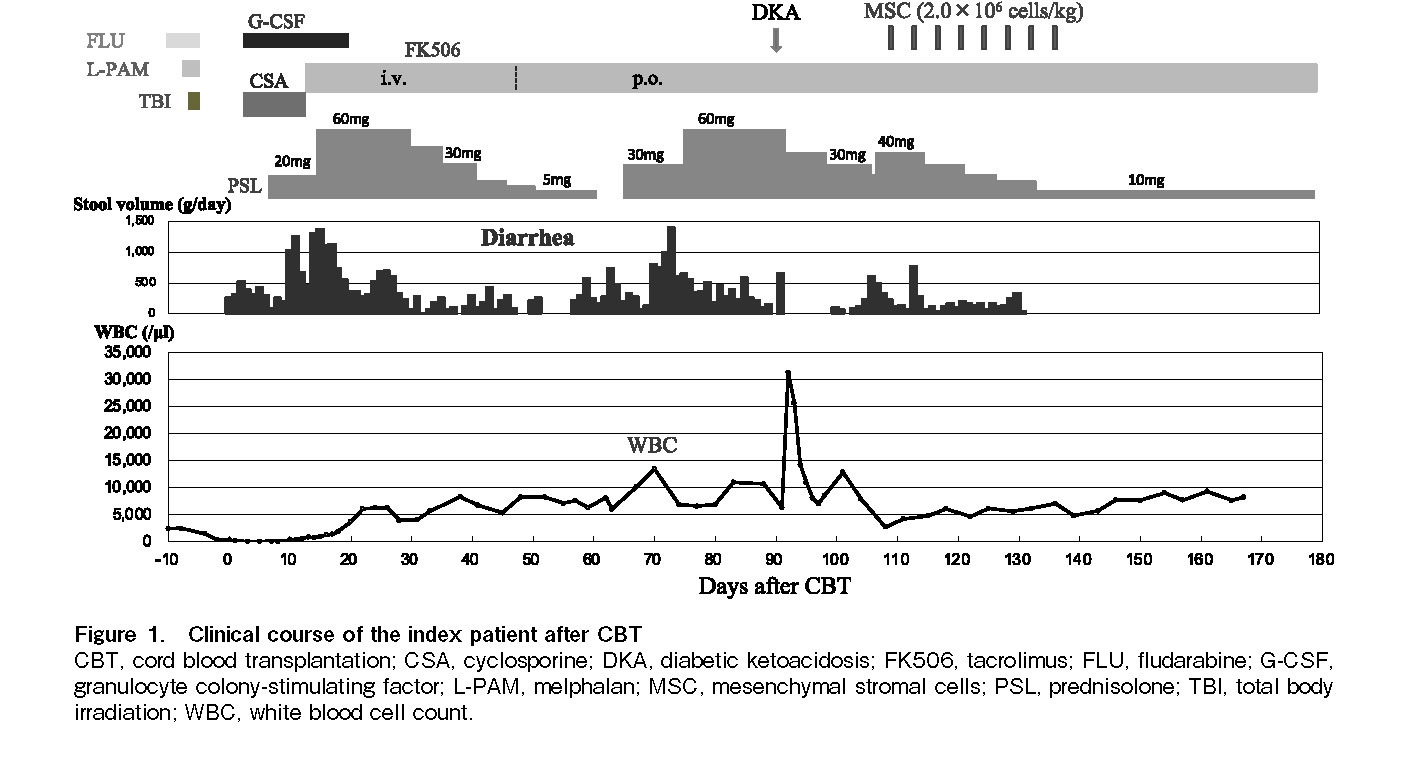 The pediatric patient described in this report suffered from gastrointestinal steroid-dependent aGVHD, and MSCs were administered more than 100 days after HCT. We selected MSC therapy for steroid-dependent aGVHD, given the difficulty in increasing the steroid dose due to DKA complications and the promising evidence supporting the use of MSCs in children with gastrointestinal aGVHD2.

In contrast to the present case, some studies have indicated that a delay in MSC infusion from the onset of aGVHD negatively impacts overall survival or the response rate in children and adults3. For example, a recent large study on Prochymal use for aGVHD in Japan has reported that 92 out of 151 (61%) patients of all ages, whose median duration of MSC therapy after HCT was 49 days (8-178 days), achieved overall response on day 284. This was a feasible result to adopt MSC after a prolonged duration from aGVHD diagnosis. Furthermore, some reports have indicated a lack of association between clinical outcomes and the interval between aGVHD and MSC treatment2, 5.

The steroid-dependent aGVHD in the present patient was classified as recurrent late aGVHD. However, distinguishing chronic GVHD (cGVHD) from late aGVHD is sometimes challenging owing to the heterogeneous manifestation of cGVHD.6 For example, diarrhea is common in both late aGVHD and cGVHD. It is also suggested that patients with late aGVHD are more likely to develop cGVHD7. Accordingly, it is conceivable that MSC therapy should also be effective for cGVHD. A recent investigation of MSC therapy demonstrated durable responses in adult patients with steroid-resistant cGVHD8.

The mechanism of developing classical or early aGVHD has been well researched, whereas late aGVHD remains poorly understood. Consequently, it remains unknown whether early and late aGVHD exhibit distinct pathophysiologies. One possible explanation for the efficacy of MSC in treating late aGVHD is that MSC induces differentiation of naïve CD4+ T cells into regulatory T cells (Treg), which play important roles in maintaining immune homeostasis and promoting tissue regeneration9. It has been reported that pro-inflammatory cytokines, such as tumor necrosis factor (TNF)-α and TNF-γ, in aGVHD-damaged tissues activate MSC. This activated MSC secretes transforming growth factor (TGF)-β, which potentiates Treg expansion. Recent studies have shown that a decrease in the size of the Treg population contributes to the pathogenesis of late aGVHD10. Thus, the MSC infusion could explain the increase in the Treg population, thereby ameliorating late aGVHD.

In conclusion, the present case highlights MSC treatment as an effective strategy for gastrointestinal steroid-dependent aGVHD, even after a prolonged interval from the onset of aGVHD. Accumulation of similar cases is necessary to confirm the benefits of MSCs in children.

The present study was approved by the Institutional Review Board of Sapporo Hokuyu Hospital, and informed consent was obtained from the patient's family.