Cytokine release syndrome (CRS), which may be associated with fever, hypotension, hypoxia, and organ damage, is caused by a massive cytokine release after chimeric antigen receptor (CAR)-T cell therapy. We present the case of a patient who developed severe bloody diarrhea due to CRS after CAR-T cell infusion. A 10-year-old boy presented with a second relapse of B-cell precursor acute lymphoblastic leukemia 6 months after hematopoietic stem cell transplantation from an unrelated donor. CAR-T cells (tisagenlecleucel) were infused at the third complete remission after salvage chemotherapy. While fever >39C was sustained from day 4, circulatory and respiratory status remained stable. However, he experienced severe bloody diarrhea. There was no evidence of infection; lower gastrointestinal (GI) endoscopy revealed extensive edema with erosion and ulceration, suggestive of non-specific intestinal inflammation. Thus, we considered CRS-associated grade 3 GI damage and administered a single dose of tocilizumab for grade 2 CRS, followed by 4 days of corticosteroids. Afterwards, no fever or GI bleeding was observed. Biopsy of the intestinal mucosa revealed ulcerative change with a lack of epithelial cells, which may correspond to histologic grade 4 graft versus host disease (GVHD). However, diarrhea corresponded to stage 1 GVHD, and the GVHD risk after CAR-T cell infusion has been reported to be rare in clinical practice. Although severe GI symptoms associated with CRS after CAR-T therapy are rare, early tocilizumab use is recommended for non-infectious severe GI symptoms to avoid long-term corticosteroid use, which may reduce CAR-T cell efficacy.

Cytokine release syndrome (CRS), a major acute complication of chimeric antigen receptor (CAR)-T cell therapy, is caused by a massive release of cytokines, which may damage organs, including the gastrointestinal (GI) tract1. However, diarrhea after CAR-T cell infusion has been reported in a few adults and rarely in children2–4. Here, we present the case of a boy with severe bloody diarrhea due to CRS after CAR-T cell infusion for refractory B-cell precursor acute lymphoblastic leukemia (ALL).

The patient was a 10-year-old boy with a second relapse of B-cell precursor ALL. An isolated bone marrow relapse of CD19-positive ALL harboring P2RY8-CRLF2 fusion was detected 6 months after peripheral blood stem cell transplantation from a 6/8 HLA-allele matched unrelated donor. Donor chimerism in the bone marrow was 100% and 84% at day 60 after transplantation and at relapse, respectively. Tacrolimus, used for GI graft-versus-host disease (GVHD)-associated mild nausea, was immediately discontinued for lymphocyte apheresis. Following lymphocyte apheresis, he was treated with one cycle of chemoimmunotherapy with inotuzumab ozogamicin and mini hyper-CVD and achieved a third complete remission with negative P2RY8-CRLF2 transcripts (donor chimerism 98.8%). During this period, there was no recurrence of symptoms related to GI GVHD. CAR T-cells (tisagenlecleucel) were infused after completion of lymphodepleting chemotherapy consisting of fludarabine and cyclophosphamide. The clinical course of the patient is shown in Figure 1. The patient sustained a fever of >39C from day 4 with some erythema of the neck and petechiae on the extremities, but circulatory and respiratory status remained stable. However, he experienced diarrhea accompanied by severe abdominal pain from day 5, which turned bloody from day 8. Diarrhea was less than 500 mL/m2 per day; however, the frequency was approximately 10 to 30 times per day, corresponding to grade 3 GI dysfunction on the Common Terminology Criteria for Adverse Events Version 4.0 grading scale. Cytomegalovirus (CMV), adenovirus, norovirus, or bacteria causing enteritis were confirmed to be negative in antigen tests or stool cultures. Glutamate dehydrogenase and Clostridium difficile toxins were found to be negative. Complete blood cell count showed mild anemia (Hb 9.0 g/dL) and thrombocytopenia (59 × 109/L); an elevation in C-reactive protein (0.4 and 19.8 mg/dL on days 0 and 9, respectively) and ferritin (2,944 and 4,122 ng/mL on days 0 and 7, respectively) was observed. A mild increase in activated partial thromboplastin time of 28.2 to 38.8 s and prothrombin time-international normalized ratio of 1.06 to 1.51 was observed from days 7 to 9, respectively. Lower GI endoscopy on day 9 revealed diffuse mucosal edema and superficial geographic ulcers, mainly in the ascending colon (Figure 2A). Because the possibility of infectious enteritis was low, a single dose of tocilizumab (8 mg/kg) was administered on day 9. Corticosteroids (2 mg/kg of methylprednisolone) were administered from day 10 for 2 days and stopped gradually over another 2 days. All five biopsies from the small and large intestines demonstrated ulcerative changes with severe inflammation composed of lymphocytes, plasma cells, and neutrophils, with no epithelial cells. Some atypical nuclei were observed in capillary endothelial cells, which should be distinguished from viral infections. Immunohistochemistry for CMV was negative in all five biopsies. Other possible differential diagnoses included histologic grade 4 GI GVHD, but no specific histologic clues were available because there were no crypts and epithelial cells to evaluate the histological hallmark of GI GVHD5. Since histologic grade 4 GI GVHD was inconsistent with the small amount of diarrhea, we concluded that the cause of bloody diarrhea was not GVHD but CRS. No fever, cutaneous manifestations, or GI bleeding were observed after day 11, and diarrhea resolved by day 25 as oral intake improved. The patient remained in complete remission 15 months after CAR-T cell therapy. 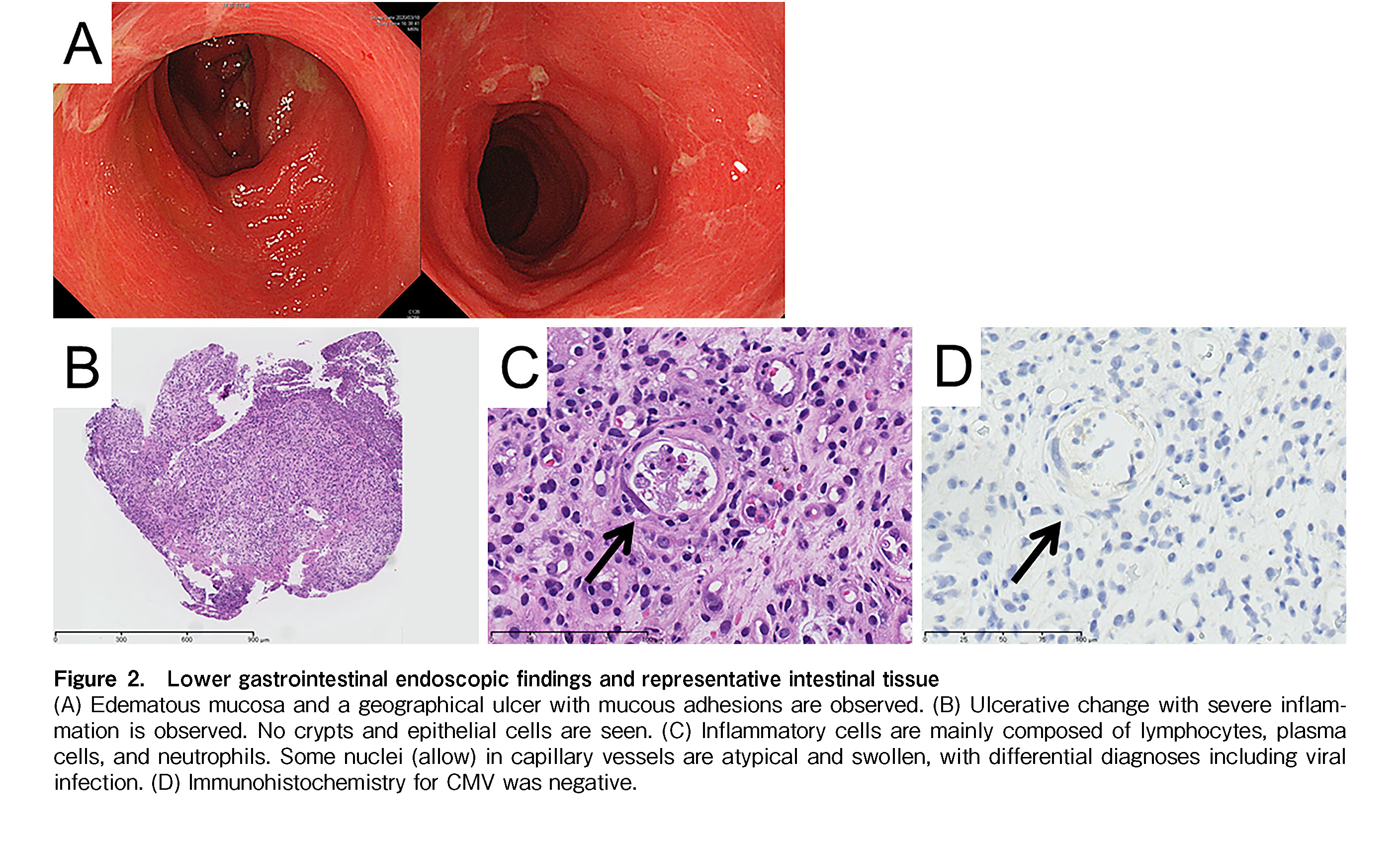 Diarrhea may occur after CAR-T cell therapy as a manifestation of CRS1. However, previous studies reported only two adult patients and no pediatric patients presenting with diarrhea after CAR-T cell therapy2–4. Furthermore, the severity or clinical course of GI symptoms in these few cases has not been described. In addition to CRS, the main differential diagnoses for the causes of bloody diarrhea after CAR-T cell therapy are infections and GVHD in those with a history of hematopoietic stem cell transplantation. Diarrhea is a typical symptom of GI GVHD, and in severe cases, bloody stools may be present. Although GVHD risk is relatively low with tisagenlecleucel6, a higher incidence of GVHD has been reported in patients treated with the new-generation CAR-T products6, 7. Furthermore, active GVHD at lymphocyte apheresis is a risk factor for worsening pre-existing GVHD. Activation of residual host-derived T cells in the intestine may also aggravate GI GVHD8; therefore, the possibility of GVHD should be considered after CAR-T cell therapy in patients who experience relapse after transplantation.

Therapeutic interventions for CRS of GI damage without other organ dysfunction may vary depending on the grading system used as a reference. For example, the American Society for Transplantation and Cellular Therapy grading system is based on fever, hypotension, and hypoxia. Organ toxicity was not included because it is thought to be associated with severe respiratory failure and hypotension. Management of organ toxicities is based on specific standard guidelines, and it is not thought to influence the decision to use CRS-specific therapies9. Other CRS grading systems include organ toxicities, and therapeutic interventions with tocilizumab +/− corticosteroids are recommended for patients with ≥ grade 2 organ toxicities1, 10. Despite a trend towards the early use of tocilizumab, the administration of corticosteroids is considered cautiously because high cumulative doses of corticosteroids may affect clinical outcomes and induce disease recurrence1, 10, 11.

In our case, although the circulatory and respiratory statuses were unremarkable, high fever persisted and GI symptoms worsened. As no evidence of infection or GVHD was obtained, we concluded that the bloody diarrhea was due to CRS. Since grade 3 GI dysfunction corresponded to grade 2 CRS, tocilizumab was administered according to the algorithm1. A single dose of tocilizumab was highly effective not only for the persistent fever but also for bloody diarrhea and erythema, and the concomitant corticosteroids was discontinued after 4 days. The fact that the immunosuppressive drugs could be completely discontinued within a few days suggests that the GI symptoms in this case were more likely to be associated with CRS.

Severe bloody diarrhea is a rare but important complication of CRS. For non-infectious severe GI symptoms after CAR-T cell therapy, we recommend the early use of tocilizumab, as it may prevent the long-term use of corticosteroids.

Informed consent was obtained from the patients’ guardians.

H.G. has been on the advisory board of Novartis. The other authors declare no conflicts of interest. Disclosure forms provided by the authors are available on the website.