Aggressive T and NK-T-cell lymphoma is a group of heterogeneous diseases with a poor long-term prognosis1. Its incidence is high in East Asia, accounting for 22% to 42% of the total number of patients diagnosed with lymphoma2. The risk of relapse is high even with intense chemoimmunotherapy. Based on previous studies, the five-year overall survival (OS) ranges between 30%-50%, with most deaths being disease-related3, 4. To improve long-term survival, hematopoietic stem cell transplantation (HSCT) has been performed in both upfront and relapse-refractory settings. Autologous SCT (ASCT) as consolidation therapy in patients with peripheral T-cell lymphoma (PTCL) who attain first remission following induction chemotherapy is not a universally accepted standard of care. To determine the efficacy and toxicity of HSCT in the management of T and NK-T-cell lymphoma, we analyzed the transplantation results at our institution. Next, we compared the survival outcomes of patients with PTCL who received upfront ASCT at first remission with a historical cohort who did not receive upfront ASCT.

From the hematopoietic SCT registry of Singapore General Hospital, we retrospectively analyzed consecutive T-cell lymphoma and NK-T-cell lymphoma patients who underwent autologous and allogeneic (allo) SCT between January 2010 and June 2020. The decision for transplantation at the upfront or relapse-refractory setting was made by the attending physician and patient. Diagnosis of lymphoma was determined by histological and immunophenotypic analyses and defined according to the 2008 World Health Organization classification system5.

To examine the role of upfront ASCT, a historical cohort of patients aged 18-65 years old with histologically confirmed nodal PTCL (excluding ALK-positive anaplastic large cell lymphoma, ALCL) who achieved first complete remission with single-line curative-intent induction chemotherapy but did not receive upfront ASCT between 2010 and 2020 were selected from the lymphoma registry (non-upfront ASCT). The institutional review board approved the protocols and analyses (2015/2419 and 2018/2520), and informed consent was obtained from all patients for the HSCT and lymphoma registry. Standard definitions were used to determine disease response6.

Chi-squared and Fisher's exact two-sided tests were used to compare the categorical variables, and the t-test was used for continuous variables. Two-sided P-values of <0.05 were considered to be statistically significant. The survival probabilities, progression-free survival (PFS), and OS were calculated using the Kaplan-Meier estimator. Log-rank analysis was used to compare the different groups. Cox regression analysis was used for multivariate variable analysis. All analyses were performed using Stata software (StataCorp, College Station, TX, USA).

From a total of 52 patients, 32 and 16 underwent autologous SCT and allogeneic SCT, respectively. Four patients relapsed post-autologous SCT and subsequently received allogeneic therapy. These four patients were included in the autologous-only group, and their survival was censored at allogeneic SCT. The median ages of the autologous and allogeneic cohorts were 46 and 37 years old, respectively. More than 80% of the patients were in stages 3-4. In both cohorts, 75% of patients had lactate dehydrogenase (LDH) above the upper limit of normal at diagnosis. Moreover, 33% of patients from the ASCT cohort and 44% from the alloSCT cohort had an intermediate to high international prognostic index (IPI=3-5). Peripheral T-cell lymphoma not otherwise specified (PTCL-NOS) and angioimmunoblastic T-cell lymphoma (AITL) were the two most common subtypes in patients who underwent ASCT, with 14 patients each. In the allogeneic cohort, there were two, one, four, two, two, and five patients with PTCL-NOS, AITL, ALCL, primary cutaneous gamma-delta T-cell lymphoma, cutaneous T-cell lymphoma, and extranodal NK-T-cell lymphoma nasal-type (ENKTL), respectively. Nine (25%) and five (31%) patients from the ASCT and AlloSCT cohorts, respectively, were positive for Epstein-Barr virus (EBV) at diagnosis, defined as EBER (EBV-encoded small ribonucleic acid) positive on histopathology sample or positive plasma EBV polymerase chain reaction.

Five patients (14%) in the ASCT cohort and five patients (31%) in the alloSCT cohort received more than two prior lines of treatment at transplant. Twelve patients (23%), five from the autologous cohort and seven from the allogeneic cohort, received novel agents (one of brentuximab, alectinib, bortezomib, romidepsin, or panobinostat) prior to transplantation. For the autologous SCT cohort, 83% and 17% of patients were in complete remission and partial remission, respectively, prior to transplantation. In the allogeneic SCT cohort, 75% of the patients were in complete remission, and 25% were in partial remission prior to transplantation. More patients in the autologous SCT cohort received HSCT upfront at first remission compared to the allogeneic SCT cohort (58% vs. 19%). The conditioning regimens for patients in the ASCT group were BEAM (carmustine-etoposide-cytarabine-melphalan), except for two who received Thiotepa-based regimens. In the allogeneic SCT group, 63% had RIC/non-myeloablative conditioning, and 37% had myeloablative conditioning. Twelve (75%) patients received full HLA-matched donors, including matched siblings and matched unrelated donors. The baseline characteristics, disease status, and transplant details of all of the included patients are summarized in Table 1.

Of the 36 patients in the autologous SCT cohort, 18 had nodal PTCL (excluding ALK-positive ALCL) transplanted upfront at first complete remission (upfront ASCT). These patients were compared to 15 patients with PTCL (excluding ALK-positive ALCL) from a historical cohort that did not undergo ASCT upfront (non-upfront ASCT) at first complete remission. The median age for the upfront ASCT and non-upfront ASCT cohorts was 43 and 55 years old, respectively. These two cohorts did not differ significantly in Eastern Cooperative Oncology Group performance status, PTCL subtype, and stage of disease. The most common induction chemotherapy was cyclophosphamide-doxorubicin-vincristine-prednisolone (CHOP)-based (78% for upfront ASCT and 87% for non-upfront ASCT). For the non-upfront ASCT cohort, one patient received consolidation radiotherapy, and one patient received maintenance methotrexate and prednisolone. These findings are summarized in Table 2. 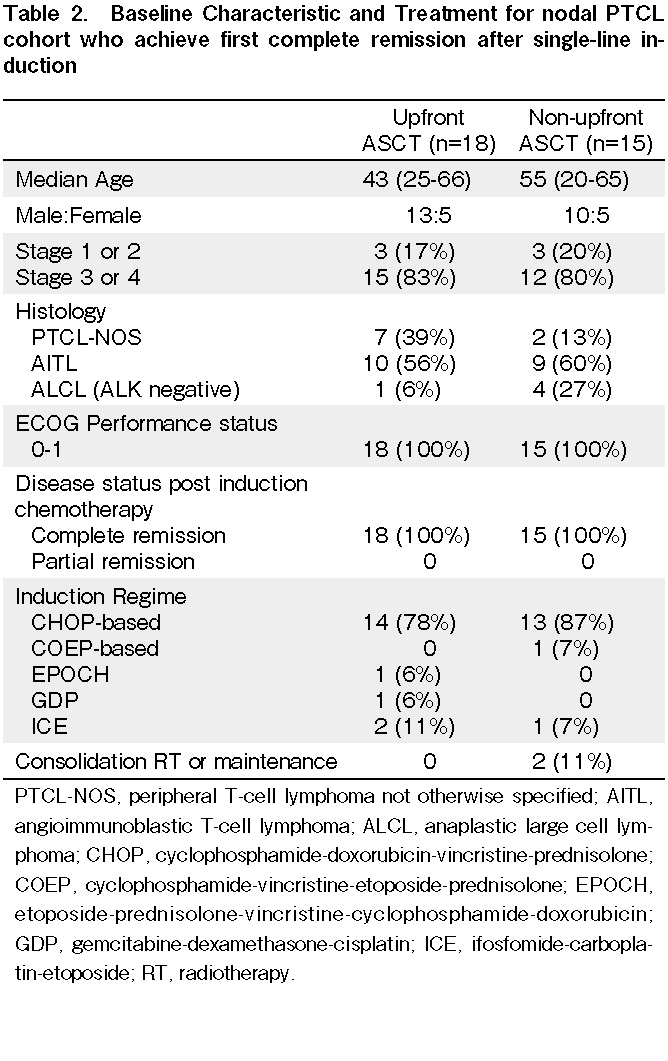 Non-relapse mortality (NRM) due to myocardial infarction and bacterial pneumonia occurred in two patients (6%) in the autologous cohort. Seven patients (43%) in the allogeneic cohort suffered from NRM. Among those, one patient with a full HLA-matched donor died of severe graft versus host disease (GVHD) refractory to multiple lines of immunosuppressant/immunomodulator. Two, two, one, and one patient died of fungal pneumonia, bacterial pneumonia, pneumonia with underlying chronic lung GVHD, and pneumonia with concomitant diffuse alveolar hemorrhage and thrombotic microangiopathy, respectively.

Multivariate analysis was performed on the LDH, stage of disease, IPI, EBV status at diagnosis, number of prior line treatments, and use of novel agents. EBV-positivity at diagnosis had a poor prognosis in terms of PFS with a hazard ratio of 3.09 (P=0.040). For OS, EBV-positivity and more than two prior lines of treatment at transplant were associated with a poor prognosis with hazard ratios of 4.69 (P=0.025) and 11.02 (P=0.012), respectively. The above findings are summarized in Table 3. 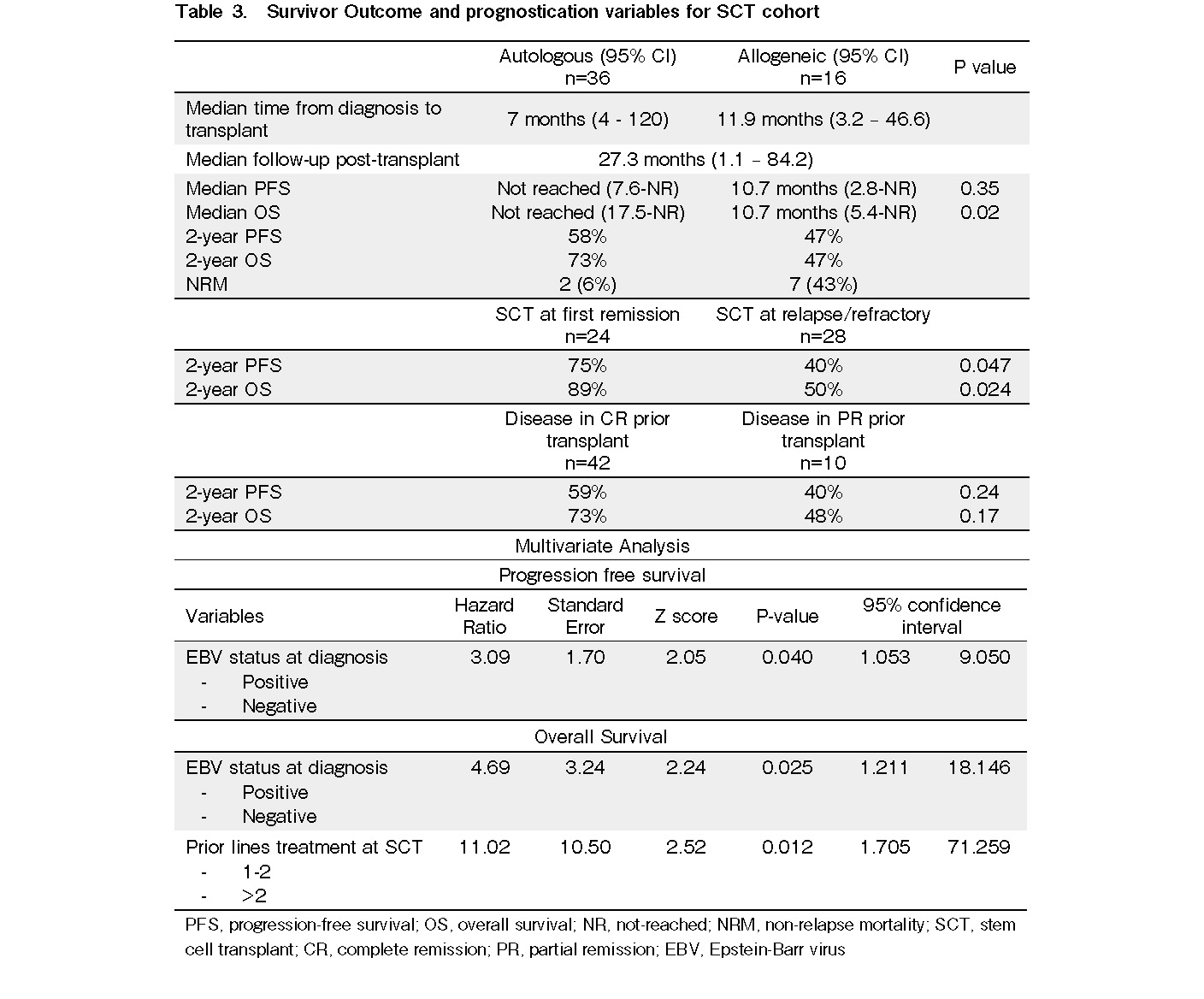 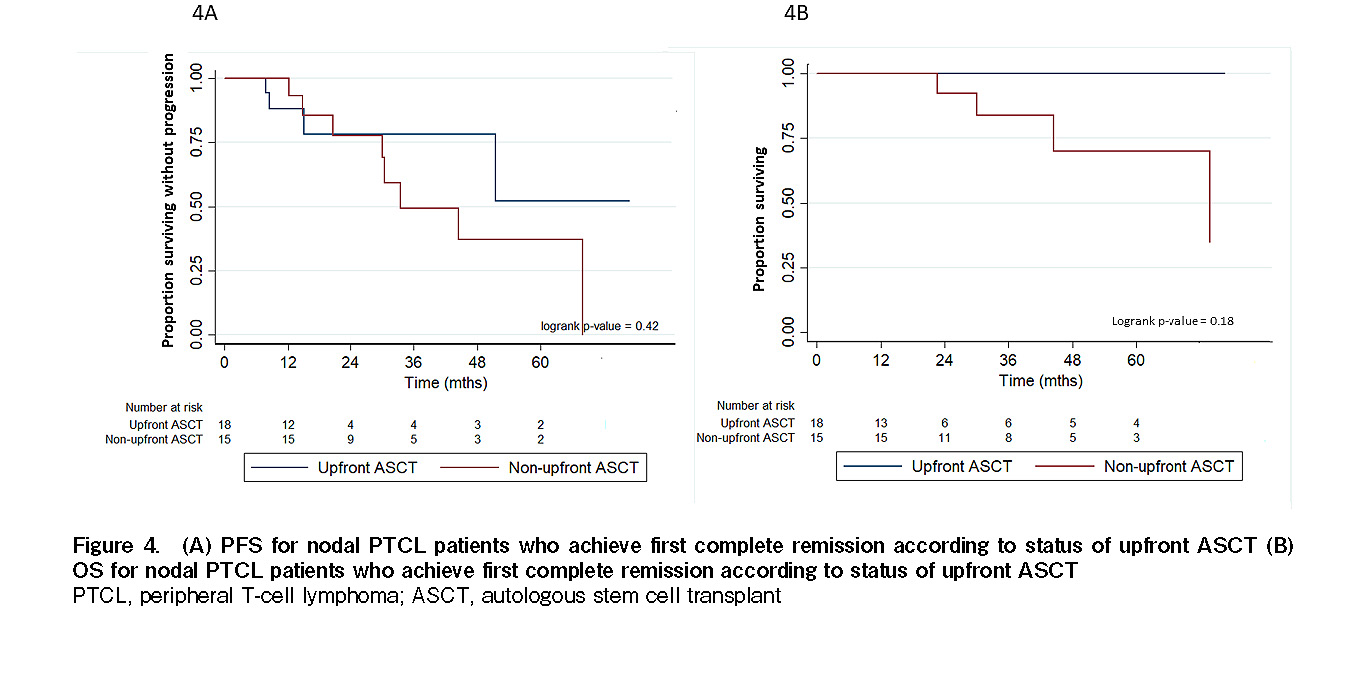 All our patients were in remission (complete or partial) prior to transplantation. This is due to patient selection and physician recognition that disease status at transplantation greatly determines the outcome. Hwang et al. demonstrated that patients with PTCL and NK/T-cell lymphoma who underwent transplantation in remission had superior five-year OS rates of 76% and 53%, respectively, compared with those not in remission, with five-year OS rates of 25% and 20%, respectively12. We did not observe any significant difference in survival between complete remission and partial remission, although a trend of better survival was observed in the complete remission cohort. With the use of novel agents, it is expected that more patients will achieve a certain degree of remission, which would enable them to receive SCT when possible. The impact of a novel agent upfront, such as the use of brentuximab vedotin in the first-line treatment of CD30-positive PTCL as described by Howitz et al. on SCT consolidation at first remission, remains unclear13. A proportion of our patients with relapse-refractory disease received novel agents followed by allogeneic SCT, indicating that chemo-responsiveness does affect SCT choice.

Based on multivariate analysis, EBV-positivity at diagnosis appeared to be a poor prognostic marker in PFS and OS with hazard ratios of 3.09 and 4.69, respectively. This suggests that EBV-associated T-cell lymphoma is more aggressive and that transplantation cannot entirely negate the negative impact of this disease biology. Dupuis et al. had previously reported adverse prognostic outcomes in EBV-positive lymphoma, especially in elderly patients14. Haverkos et al. reported a two-year OS rate of 26% for EBV-positive patients compared to 55% for EBV-negative PTCL patients15. We believe that our study results were affected by patients with EBV-positive extranodal NK/T-cell lymphoma in the allogeneic cohort who did not have favorable outcomes. A recent phase 2 study by Porcu et al. looking at the novel agent Nanotinostat combined with Valganciclovir showed promising efficacy in relapse-refractory EBV-positive T and NK/T-cell lymphoma cohorts with a documented overall response rate of 80% and a complete remission rate of 40%16. The role of EBV-targeted novel therapy incorporated into peri-transplantation is worth exploring in the future. In addition to EBV status, patients with more than two prior lines of treatment also had poorer OS, with a hazard ratio of 11.02. Better salvage and consolidation in patients with multiple relapse-refractory T and NK/T-cell lymphoma is required.

The above finding of excellent survival for upfront SCT at first remission prompted us to look further into the benefit of upfront ASCT in nodal PTCL. The median follow-up duration between our upfront ASCT and non-upfront ASCT cohorts was quite different (18.2 months vs. 41.7 months), making it challenging to compare survival. There was no statistically significant difference in survival outcome between the two cohorts. Patients in the non-upfront ASCT cohort received other consolidation and maintenance therapy methods, which might have benefited them without the need for SCT. Some patients appeared to benefit from the defer-ASCT approach. This was observed when three patients in the non-upfront ASCT cohort received ASCT at relapse. Two of the three patients remained alive and progression-free at the data cut-off. Fossard from the LYSA group conducted an analysis using propensity score matching to compare a group that underwent ASCT and a group that did not. They found that both showed similar survival outcomes, with five-year PFS and OS rates of 41% and 60% vs. 46% and 59%, respectively17. Park et al. reported that the COMPLETE study demonstrated that upfront autologous SCT is associated with superior survival in patients with advanced-stage disease and higher IPI and AITL subtypes18.

There are several limitations to our study. First, because this is a retrospective analysis, patient selection bias and physician preference bias may have occurred. The cohorts of HSCT patients were those that fit and were chemosensitive. It does not reflect the actual demographics of aggressive T and NK/T-cell lymphoma populations in which a proportion of patients would be elderly, unfit, or have refractory disease. For the historical nodal PTCL cohort patients, no data could be found on why patients did not receive upfront ASCT at first remission. Although we selected patients less than 65 years old, those who might be comorbidly unfit for transplantation may have been included. Tan et al. suggested that AITL histology pattern-1 is associated with better prognoses, which might affect decisions regarding upfront ASCT19. Second, this transplantation data covered ten years from 2010 to 2020, but two-thirds of the autologous HSCTs were performed after 2016. Therefore, the follow-up duration for the HSCT cohort was relatively short. This reflected the change in practice by our institution in which upfront HSCT consolidation in PTCL is being performed more often since the last American Society for Blood and Marrow Transplantation and European Society for Blood and Marrow Transplantation recommendations20, 21. This explains the discrepancy in follow-up duration between the upfront ASCT and non-upfront ASCT groups. Lastly, our sample size was small, and collaboration with other institutions is required to improve our analysis power.

Our study shows that HSCT is a feasible treatment option for aggressive T and NK/T-cell lymphoma in both upfront and relapse-refractory settings with acceptable survival outcomes and toxicity profiles. EBV-positivity at diagnosis and more than two prior lines of treatment at transplantation are associated with a poorer prognosis. The role of upfront ASCT in first complete remission for nodal PTCL is unclear and is limited by the small sample size. Nevertheless, we believe there is a role for upfront ASCT in young-fit PTCL patients with higher disease burden stratified by staging and IPI and possibly EBV-positivity. Further studies with a larger number of patients are required.