Hematopoietic stem cell transplantation (HSCT) has actively performed worldwide as a curative treatment for many malignant and nonmalignant hematological diseases, as well as several non-hematological diseases, and its use continue to increase every year1. The Asia-Pacific Blood and Marrow Transplantation Group (APBMT) commenced a survey of HSCT activities in 2007 tracing back through the activity data in 1986, and has continued with these surveys for 14 years thereafter. The survey was performed using a simple Excel sheet collecting the data of HSCTs performed in the previous year regarding diseases for which HSCT was indicated (or performed), stem cell sources, and donor type. Over the years, some of the disease classifications have been changed, and some collection items were added by the data center to adapt the survey sheets to global standards. Despite such changes, the APBMT Activity Survey continued to be conducted every year with the cooperation of data submission managers in each country/region. The data center regularly analyzed the collected data in detail, and the results were shared with APBMT participating countries/ regions. The data was also reported to the Worldwide Network for Blood and Marrow Transplantation (WBMT). APBMT has published the results of the HSCT performed in two different time periods (1986-20062 and 2005-20153). We herein report the results of HSCT in the Asia-Pacific region in 2016, focusing on the activity regarding haploidentical and cord blood (CB) transplants.

The activity survey data were collected for disease for which transplant were indicated, stem cell source, and donor type. The number of transplants was defined as follows: the number of HSCTs was counted as 2 in patients who had received transplants twice separately in the past year. If a patient received one HSCT using more than one donor sources, the case was counted as a mixture transplant which contains cases of bone marrow (BM) plus peripheral blood stem cells (PBSC), BM plus cord blood cells (CB), PBSC plus CB, or BM plus PBSC plus CB transplants. The APBMT Data Center had not previously collected the data under the category”haploidentical”in the activity survey and considered them as”HLA nonidentical family”. However, in order to assess the trend of haploidentical transplants more precisely, Data Center modified the 2016 survey forms, and we divided the”HLA non-identical family”donor into two categories: 1) “haploidentical”donor, who is a first-degree relative (sibling, parent or child) with 2 or more loci mismatched within the loci HLA-A, -B, -C, -DRB1, and-DQB1 in the GvH and/or HvG direction and 2) “other related”donor, who is any other family member not included in the category of HLA-identical and”haploidentical”siblings. The number of CB transplants in this paper has excluded the ones from related donors.

The transplant rates in each country/region were calculated as the number of each type of HSCT per 10 million residents in 2016. The total population for each country was extracted from a United States Census Bureau report4.

All analyses in this report were conducted at the APBMT Data Center using the basic function of Excel. The present survey was approved by the Institutional Review Board of the Aichi Medical University School of Medicine and the Registry Committee in APBMT.

Number of centers and transplants 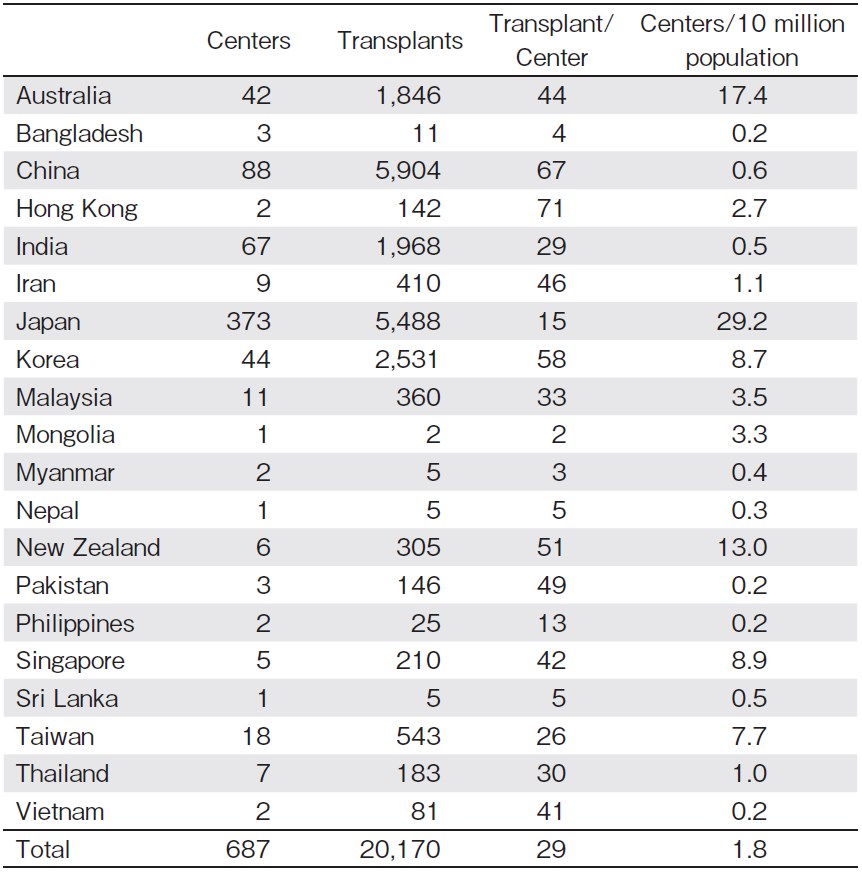 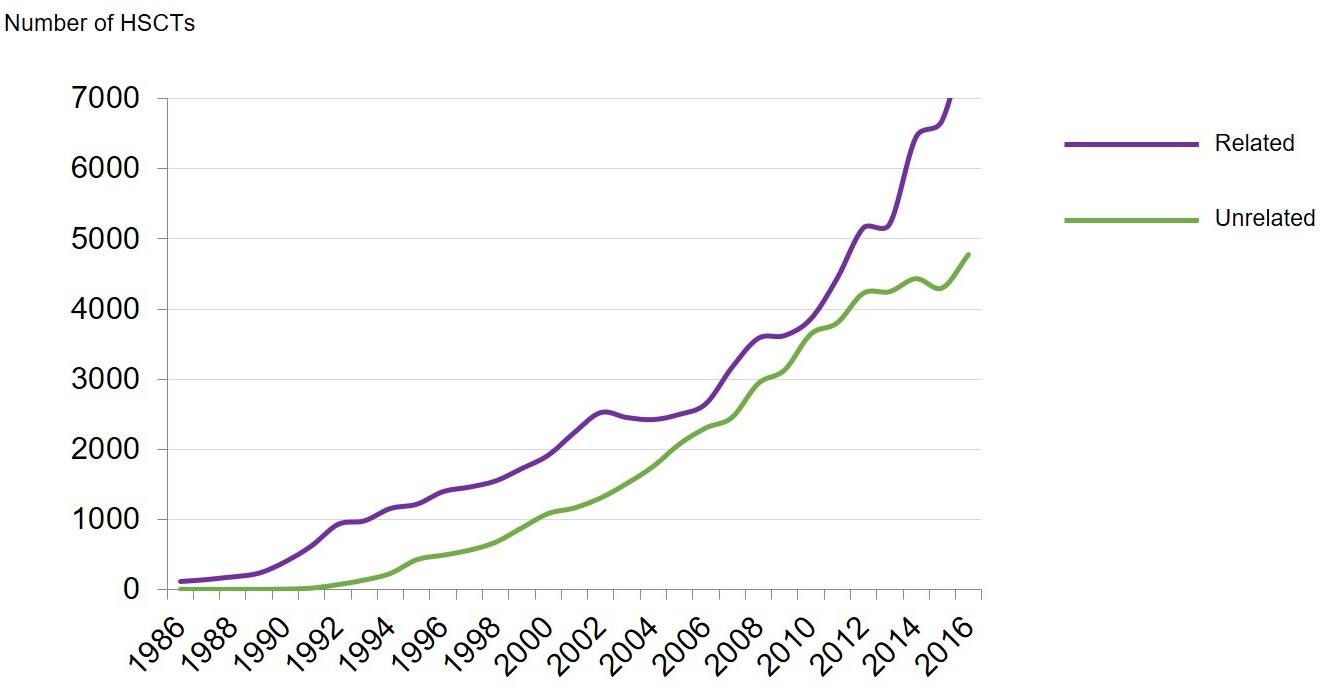 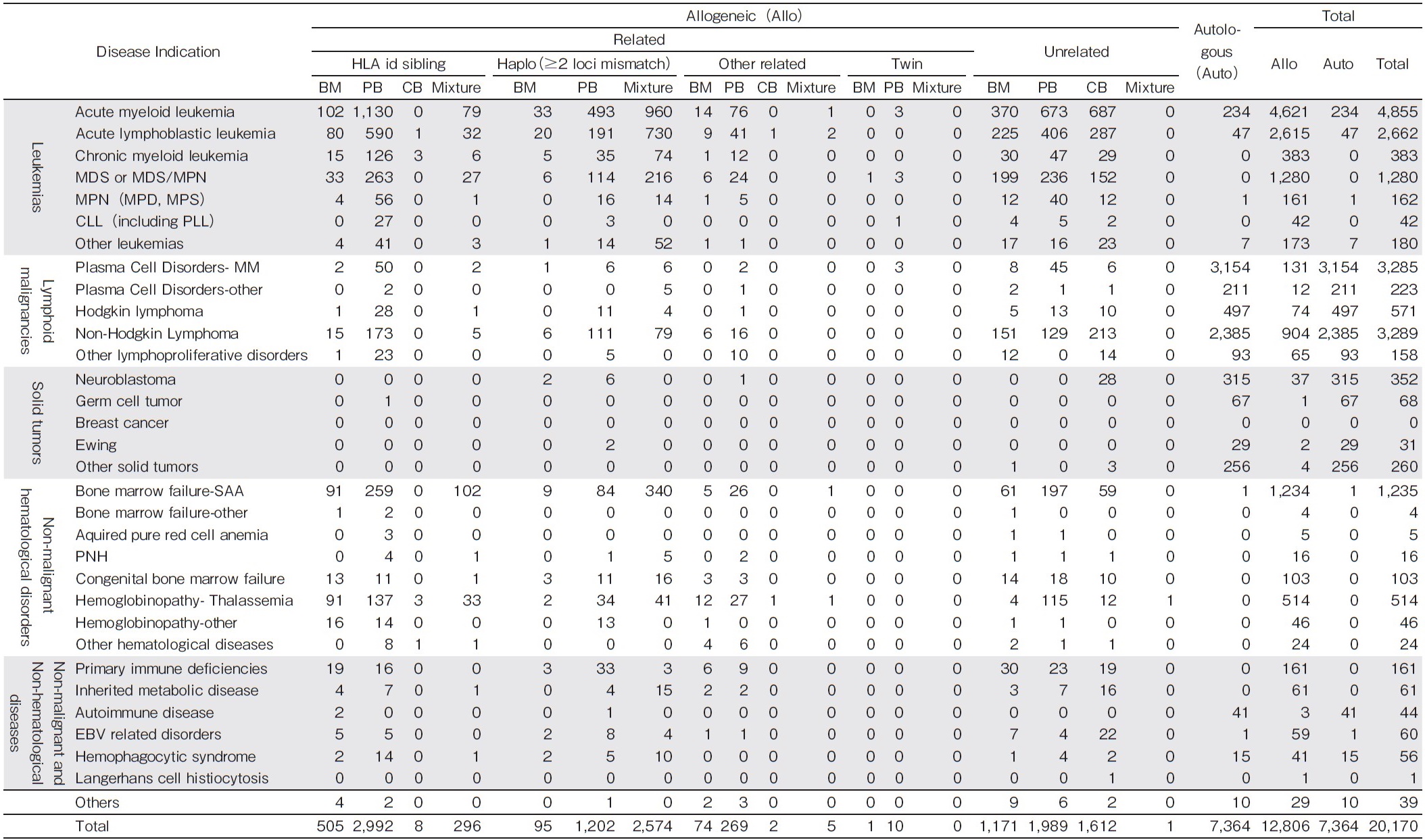 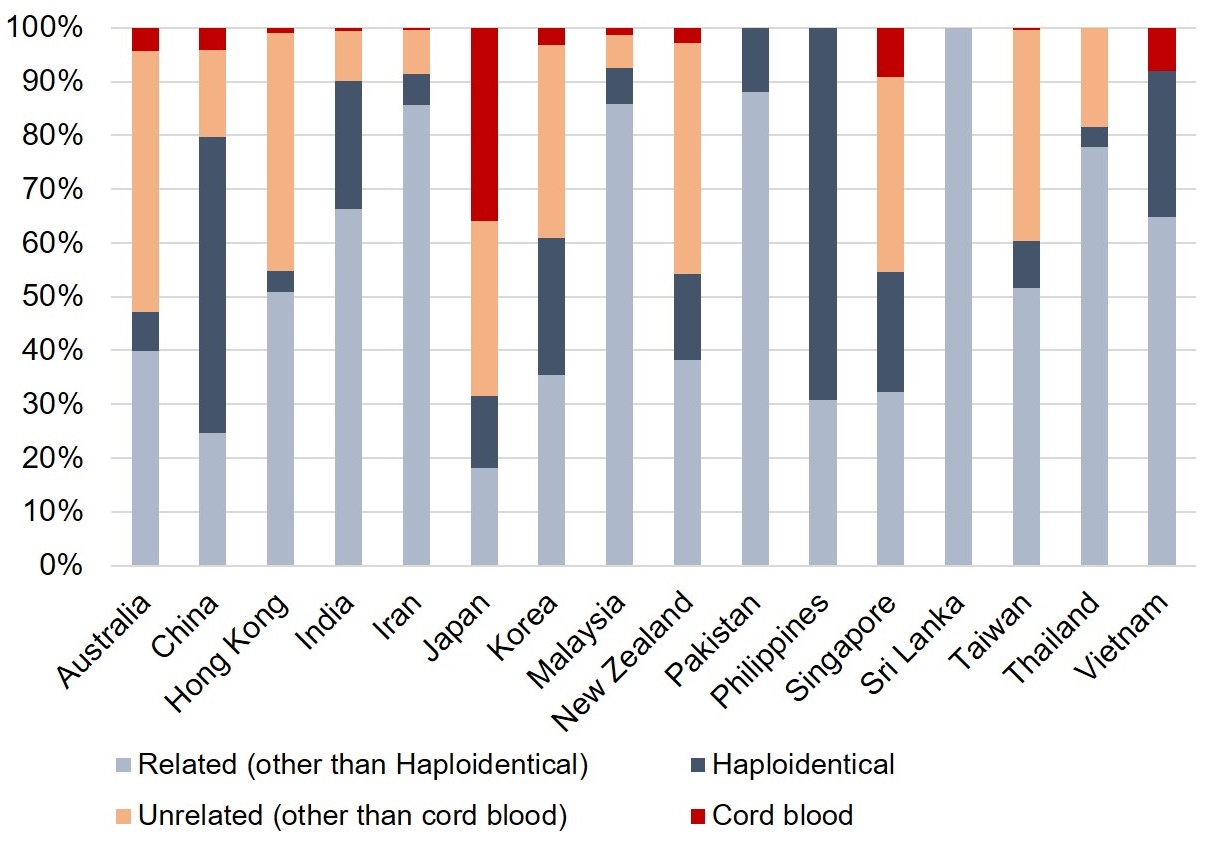 Table 3. The number of haploidentical transplants by stem cell sources and cord blood transplants in each country/region 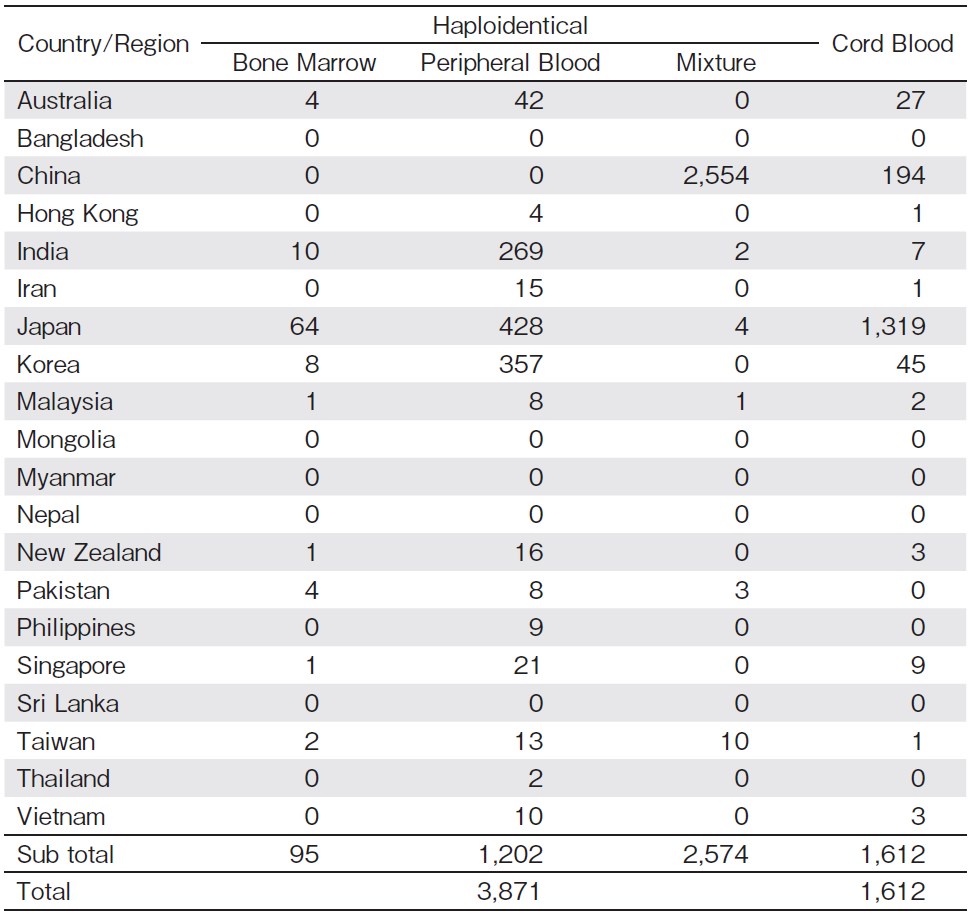 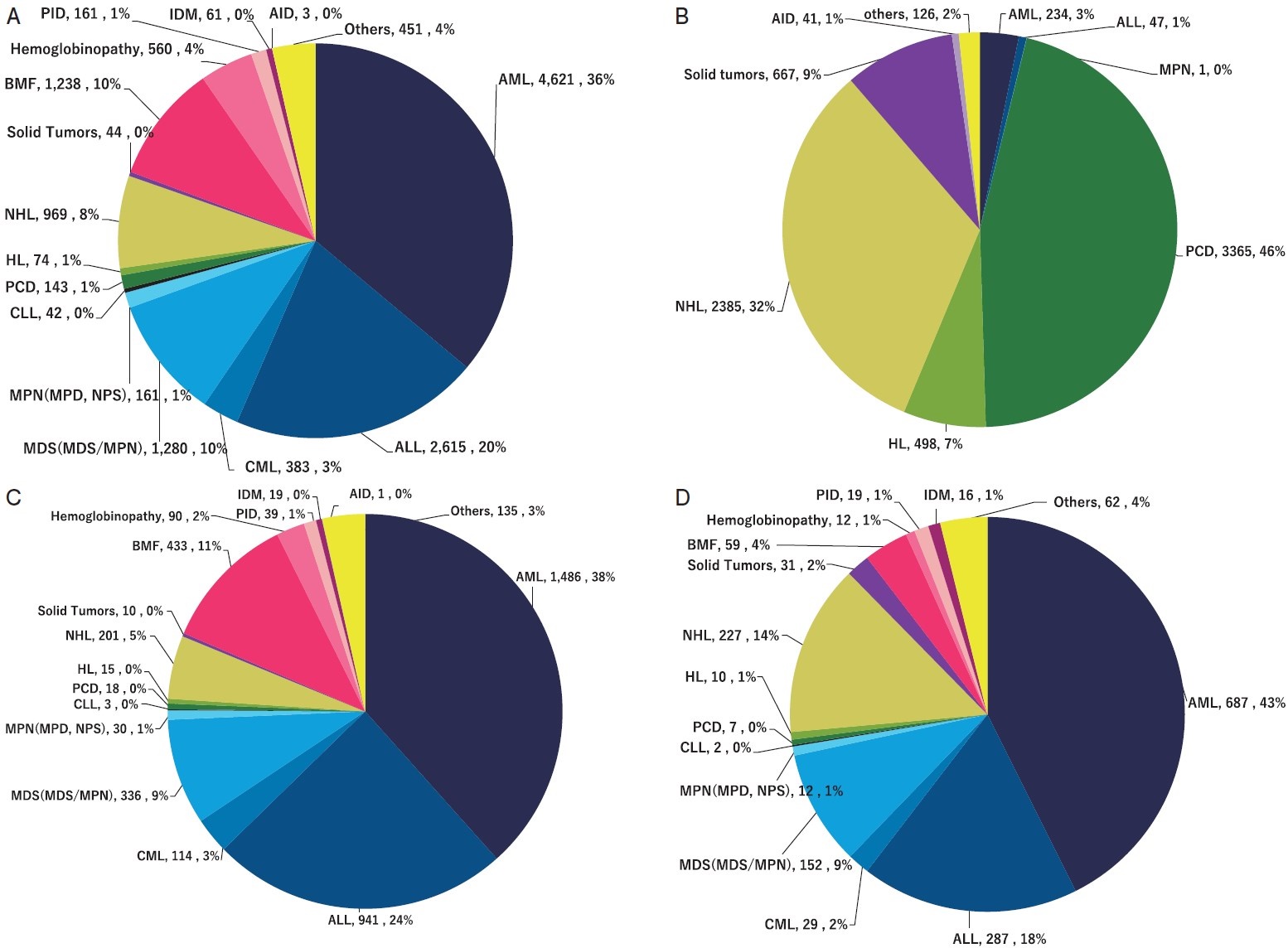 This report describes the transition and diversity of transplants in the AP region through the continuous transplant activity data collection and analysis. According to the first APBMT Activity Survey report by Yoshimi et al.2, the number of countries/regions reported in 2006 was 9 (China, Hong Kong, Iran, Japan, Korea, Malaysia, Singapore, Taiwan, and Vietnam), and the number of transplants was 6,418. The numbers of participating countries/regions and transplants have increased 2.2 and 3.1 times over the last 10 years, respectively, indicating HSCT activity has continued to increase in the AP region. In this report we focused on the activity of haploidentical transplants in our region in comparison of transplant activity using other stem cell sources.

Bone marrow failure was the most frequent disease indication after AML and ALL in haploidentical transplants, reflecting a rapid increase in the number of severe aplastic anemia (SAA) cases in China5. Xu et al. reported favorable results on performing haploidentical transplants on SAA patients who had no identical sibling or unrelated donors, or those who failed the previous immunosuppressant therapy6, and this trend is expected to remain unchanged. In Japan, the proportion of CB transplants to unrelated transplants has also increased and the number of unrelated BM transplants and CB transplants are almost the same7. There are many reports of CB transplants for hematological malignancies from Japan and all of which suggest that CB is a favorable alternative stem cell source for patients without a human leukocyte antigen ( HLA) -matched related or unrelated donors8-10.

With an increased number of participating countries/ regions as well as the transplant centers in each country/ region, the diversity in transplants among them has been revealed. Not only the annual number of HSCTs and the total number of centers but also the average number of transplants per center, the number of centers, haploidentical and CB transplants per 10 million population showed a great difference among each country/region in this analysis. While there were countries/regions such as China, Japan, Korea, India, and Australia which had very large annual numbers of transplants and centers, those numbers in Bangladesh, Myanmar, and Sri Lanka, Nepal and Mongolia were very small. However, existing centers in these countries/regions are expected to play a central role in promoting transplant activity in each country/ region.

A trend of decreasing number of CB transplants has also been reported worldwide11-13,17. On the contrary, there are still many CB transplants in the Asia-Pacific region, especially in Japan. This could be explained by three important factors 1) since the average body weight of Japanese is relatively lighter than that of European and American, it is easier to find a suitable CB donor in Japan18, 2) the establishment of public CB banks early during the introduction of CB transplants and the cost of CB unit remains much cheaper than those in Western countries. 3) With the development of legislation for the proper implementation of HSCT medicine, the quality of CB units and the system to their supply are well maintained. CB transplants have the advantage of enabling the rapid identification of available donors but at the same time it requires more experience in managing graft failure and relapse is needed by transplant teams. In addition, for the safe preservation and stable supply of CB as well as smooth and proper operation of the marrow donor bank, it is essential for each country/region to create HSCT infrastructure in cooperation with policymakers. Passeweg11 and Baldomero13 et al. pointed out that economics and cost-effectiveness are important in selecting donors in less wealthy countries. The fact that the lack of unrelateddonor registries and public CB banks reflects an increase in haploidentical transplants and stagnation of CB transplants also applies to the Asia-Pacific region. There are 8 countries/regions with national registries and 13 that have CB banks in the Asia-Pacific region3. For HSCT activities to progress in this region, it will be imperative for all countries/regions in APBMT to establish their own HSCT registries and promote not only CB transplants but all HSCT activities on a country-by-country basis in future.

This is limited by the lack of patient outcome data. The APBMT Registry Committee established an outcome data collection system several years ago and the data is accumulating. We will then be able to report more detailed information on HSCT in this region.

We conclude that this report clarified the status of HSCT using alternative donors in this region. We could show a dramatic increase in haploidentical transplants like in other parts of the world while revealing the unique feature in this region that the activity of cord blood transplant remains high. Continuous data collection and analysis by the activity survey will help each country/region clarify the position of HSCT medicine in the Asia-Pacific region as well as in the world and reveal the direction of HSCT medicine in the very near future.

We are grateful to all APBMT members, especially to all Scientific Committee members and their data managers who gathered data in each registry, country, center, or hospital every year. We also appreciate the cooperation of all participating teams, countries/regions, and organizations, and their staffs, especially for the ABMTRR, CBMTR, ISBMT, KSBMT, JSHCT/JDCHCT, MST, and TBMT. This report was conducted by the APBMT Registry Committee and Data Center. We also thank Yukari Nakao and Hiroe Namizaki of the APBMT Data Center for their excellent assistance.

The authors declare no conflicts of interest associated with this article.Disclosure forms provided by the authors are available here.