Anti-thymocyte globulin (ATG) is an important component of preparative regimens for allogeneic bone marrow transplantation (BMT) for aplastic anemia (AA). However, the pharmacokinetics (PK) of ATG are unclear. A 38-year-old woman with severe AA underwent BMT using a fludarabine (Flu) -based and reduced-dose cyclophosphamide (CPA) -conditioning regimen comprising rabbit ATG (2.5 mg/kg, days -7 and -6), Flu (30 mg/sqm, days -5 to -2), CPA (25 mg/kg, days -5 to -2), and total body irradiation (2 Gy, day -1), following a human leukocyte antigen-match with an unrelated donor. Notably, ATG was administered earlier than that recommended by conventional schedules. The engraftment was achieved on day 15 without reactivation of the Epstein-Barr virus and residual recipient cells. Absolute lymphocyte recovery (>0.5×109/L) was achieved on day 22. The ATG concentration on day 0 and the area under the concentration-time curve (AUC) for ATG after allogeneic BMT were 21.8μg/mL and 464μg・day/mL, respectively. The patient remained disease-free for 6 years after BMT without acute or chronic graft-versus-host disease. Moreover, based on serum PK monitoring of ATG, including ATG concentration on day 0 and the AUC for ATG after BMT, the patient safely underwent the less-toxic, Flu-based, reduced-dose CPA regimen containing a low dose of ATG. In conclusion, we present the first report that analyzed the PK of ATG in a patient with AA treated with BMT from a matched unrelated donor. These findings might be helpful to determine ATG dosages for such patients receiving similar transplantations.

Novel treatments, including immunosuppressive therapy ( IST) and allogeneic bone marrow transplantation (BMT), have resulted in the improvement of severe aplastic anemia (AA) 1. However, in contrast to human leukocyte antigen-matched family donors-BMT, human leukocyte antigen-matched unrelated donors-BMT (MUDBMT) continue to face life-threatening complications. Thus, it is essential to reduce these lethal complications and develop less-toxic preparative regimens for BMT from MUD1. Among the conditioning regimens, anti-thymocyte globulin (ATG) administration is an essential component of the preparative regimen that reduces the development of graft-versus-host disease (GVHD), although an excess dose of ATG increases graft failure, infection, and lymphoproliferative disorders1. However, the optimal dose and timing of administration of ATG also remain unclear in BMT from a MUD because of the absence of pharmacokinetics (PK) data of ATG in Japanese patients with AA2-4. Here, we report the PK of ATG in a patient with severe AA treated with BMT from a MUD.

A 38-year-old woman with petechiae was referred to a regional hospital in July 2012. Laboratory results revealed pancytopenia, including a hemoglobin concentration of 4.6 g/dL, platelet count of 4×109/L, and white blood cell count of 2.87×109/L with 10.0% segmented neutrophils and 90% lymphocytes. A bone marrow biopsy revealed a fatty marrow. The chromosomal analysis displayed no abnormality.

Based on these findings, the patient was diagnosed with severe AA. Owing to the unavailability of human leukocyte antigen-matched family donors and the presence of paroxysmal nocturnal hemoglobinuria-type cells, the patient underwent a single course of IST consisting of ATG (Thymoglobulin®, Rabbit) (2.5 mg/kg×5 days), cyclosporine (5 mg/kg), and granulocyte-colony stimulating factor (300μg/day) administration (Figure 1A). However, the patient showed no response till 6 months after IST.

Figure 1A. Clinical course of the present case

Following a discussion on the benefits and risks of a second round of IST and MUD-BMT, the patient underwent BMT from a genotypically full-matched human leukocyte antigen MUD following a less-toxic preparative regimen (Figure 1A). According to previous reports from Japan1,5, we administered a fludarabine (Flu) -based reduced-dose cyclophosphamide (CPA) conditioning regimen, consisting of ATG (2.5 mg/kg, on days -7 to -6), Flu (30 mg/sqm, on days -5 to -2), CPA (25 mg/kg, on days -5 to -2), and total body irradiation (TBI) (2 Gy, on day -1). Following the transfusion of bone marrow cells (3.9×108 cells/kg) from a male MUD, short-term administration of methotrexate (15 mg/m2 on day 1 and 10 mg/m2 on days 3, 6, and 11) and tacrolimus was initiated as prophylaxis for acute GVHD. Neutrophil (>0.5×109/L) and platelet (>50×109/L) engraftment were achieved on days 15 and 21, respectively. Notably, EBV reactivation and GVHD did not develop.

To analyze the serum concentrations of total rabbit ATG, we retrospectively estimated the area under the concentration-time curve (AUC) for ATG by measuring its blood concentrations before and after BMT (Figure 1B) using an enzyme-linked immunosorbent assay as described in a previous report6. Additionally, the AUC and elimination half-life were calculated from the blood concentration data using a non-compartmental analysis with the PK analysis software, Phoenix® WinNonlin® 7.0 (Certara LP, Princeton, NJ, USA). According to the PK of ATG, the concentration of ATG on day 0 and the AUC for ATG after BMT were 21.8μg/mL and 464μg・day/ mL, respectively. The half-life of total ATG was 12.4 days (Figure 1B). To date, the patient has been diseasefree for 6 years.

Figure 1B. Anti-thymocyte globulin pharmacokinetics before and after allogeneic bone marrow transplantation
The concentration of ATG on day 0 and the area under the concentration-time curve(AUC)of ATG after the BMT were 21.8μg/mL and 464μg・day/mL, respectively. Furthermore, the half-life of the total ATG was 12.4 days.

Here, we present the first report that analyzed the PK of ATG in AA treated with BMT from MUD (Table 1A) 3,4. We safely performed the less-toxic Flu-based, reduced-dose CPA regimen containing a low dose of ATG and a low-dose TBI (Table 1B) 5-8. In comparison to previous reports6,8, ATG was administered earlier than that recommended in the conventional schedules to avoid excessive donor T-cell depletion1. Furthermore, a low dose of TBI was added to avoid graft failure in BMT from MUD1. 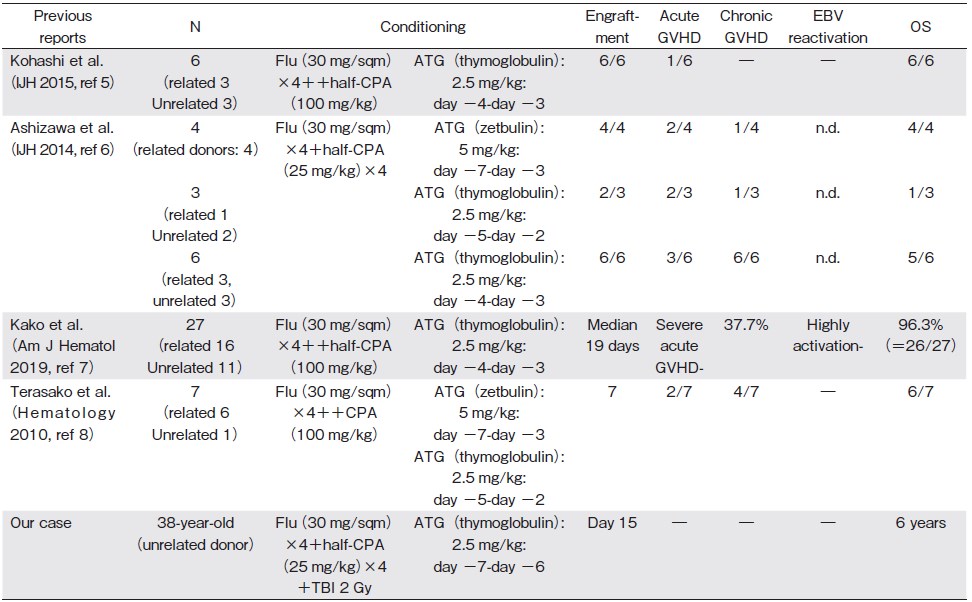 In conclusion, we present the first report that analyzed the PK of ATG in a patient with AA treated with BMT from a MUD. These findings might be helpful to determine ATG dosages in such patients receiving similar transplantations.

We are grateful to Mr. Nakamae for his valuable and insightful suggestions on the case.

NK, KM and AT have contributed equally to this manuscript.