3Division of Molecular Therapy, The Advanced Clinical Research Center, The Institute of Medical Science, The University of Tokyo, Tokyo, Japan,

Epstein-Barr virus (EBV) is a common virus that latently infects most adults and has a tropism to B lymphocytes. In 1988, two cases of EBV infection were reported to be eradicated by hematopoietic stem cell transplantation from an EBV-negative donor. However, the dynamics of EBV after cord blood transplantation (CBT), namely, the kinetics of anti-EBV antibodies, the incidence of negative/adverse seroconversion (from positive to negative), and the clinical course of re-infection (second primary infection) by EBV, have not yet been characterized in detail. Therefore, we performed a nationwide survey that focused on the dynamics of EBV after CBT 1 year or later after CBT. Negative seroconversion occurred in 23% of previously EBV-infected patients. The incidence of late-onset EBV-associated events was 1.9% (13/674) : 5 infectious mononucleosis, 2 hemophagocytic lymphohistiocytosis (HLH), and 6 remaining typical lymphoproliferative disease. HLH occurred in newly infected patients (primary or second primary) and also in those with reactivation and was fatal. The annual monitoring of anti-EBV antibody titers may facilitate the early detection of these late-onset EBV-associated events and treatment initiation before disease progression.

The first successful bone marrow transplantation (BMT) from a sibling to treat a patient with acute leukemia was performed in 19691. The application of allogeneic hematopoietic stem cell transplantation (HSCT) subsequently expanded worldwide. In 1988, the eradication of EBV by BMT from an EBV-negative donor was demonstrated in two recipients previously infected with EBV2. These findings provided proof of the concept of EBV infecting humans and persisting for life as a latent infection concealed in a certain subset of lymphocytes (B cells) after the primary infection (lytic infection).

The Japanese Cord Blood Bank Network was established in 1999. Cord blood transplantation (CBT) has since become popular in Japan. CBT is unique in that an EBV-positive patien (t more than 95% of adults are positive for EBV) receives HSCT from an EBV-negative donor. However, the dynamics of EBV after CBT, namely, the kinetics of the anti-EBV antibody, the incidence of negative/ adverse seroconversion (from positive to negative), and the clinical course of re-infection (second primary infection) by EBV, have not yet been elucidated in detail, there have been except for a few case reports3-5.

Therefore, we performed a nationwide questionnaire survey with a focus on changes in the EBV statu (s anti-EBV antibody titers before and after CBT) and the clinical manifestations of late-onset EBV-associated events. The present study was approved by the Research Ethics Committee of Osaka Womenʼs and Childrenʼs Hospital (#610).

In 2014, letters requesting participation in our survey were sent to 262 institutes in Japan, followed by questionnaires to the 146 institutes that responded.

Eligibility criteria were as follows: recipients of CBT before December 31st, 2012, CBT as the first allogeneic HCT, complete donor chimerism (≥95%), and event-free survivors for more than 1 year after CBT. Events included relapse/progression of the primary disease, second malignancy, any death, and re-transplantation. Patients with congenital immunodeficiency affecting T cells, NK cells, and/or B cells were excluded.

Previous EBV infection before CBT was defined serologically by the detection of the anti-EBV antibody prior to the first blood transfusion. EBV-associated events were as follows: infectious mononucleosis (IM), hemophagocytic lymphohistiocytosis (HLH), and lymphoproliferative disease (LPD). In overlapping cases, patients were diagnosed according to the cardinal symptom. LPD indicates the uncontrolled neoplastic proliferation of lymphoid cells with end-organ manifestations8. However, LPD may also be used as a comprehensive term over a wide variety of EBV-associated diseases. Therefore, LPD without HLH is hereafter described as"typical LPD". The chi-squared test was used in statistical analyses.

We received case reports from 83 institutes. Incomplete reports (n=4) were excluded, and the remaining 674 patients were analyzed. Patient characteristics are shown in Table 1. As the EBV status before CBT, the number of EBV-positive, EBV-negative, and EBV-indeterminate patients were 499 (74.0%), 58 (8.6%), and 117 (17.4%), respectively. 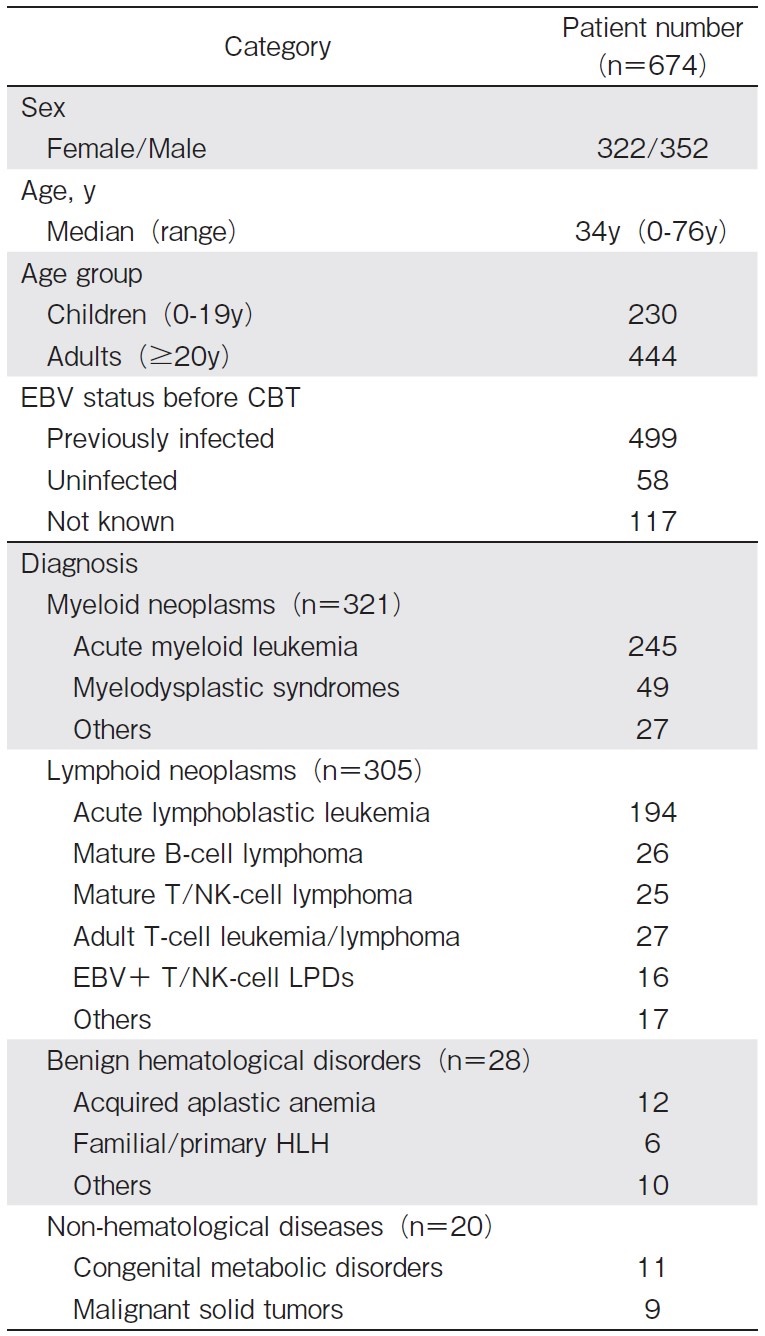 Kinetics of the anti-EBV antibody after CBT

Table 2. Anti-EBV antibody titers before and after CBT

The anti-EBV antibody was monitored in 13 out of 19 patients with negative seroconversion, with 8 subsequently showing re-infection (positive seroconversion) by EBV: the clinical manifestation was IM in one and asymptomatic in seven. 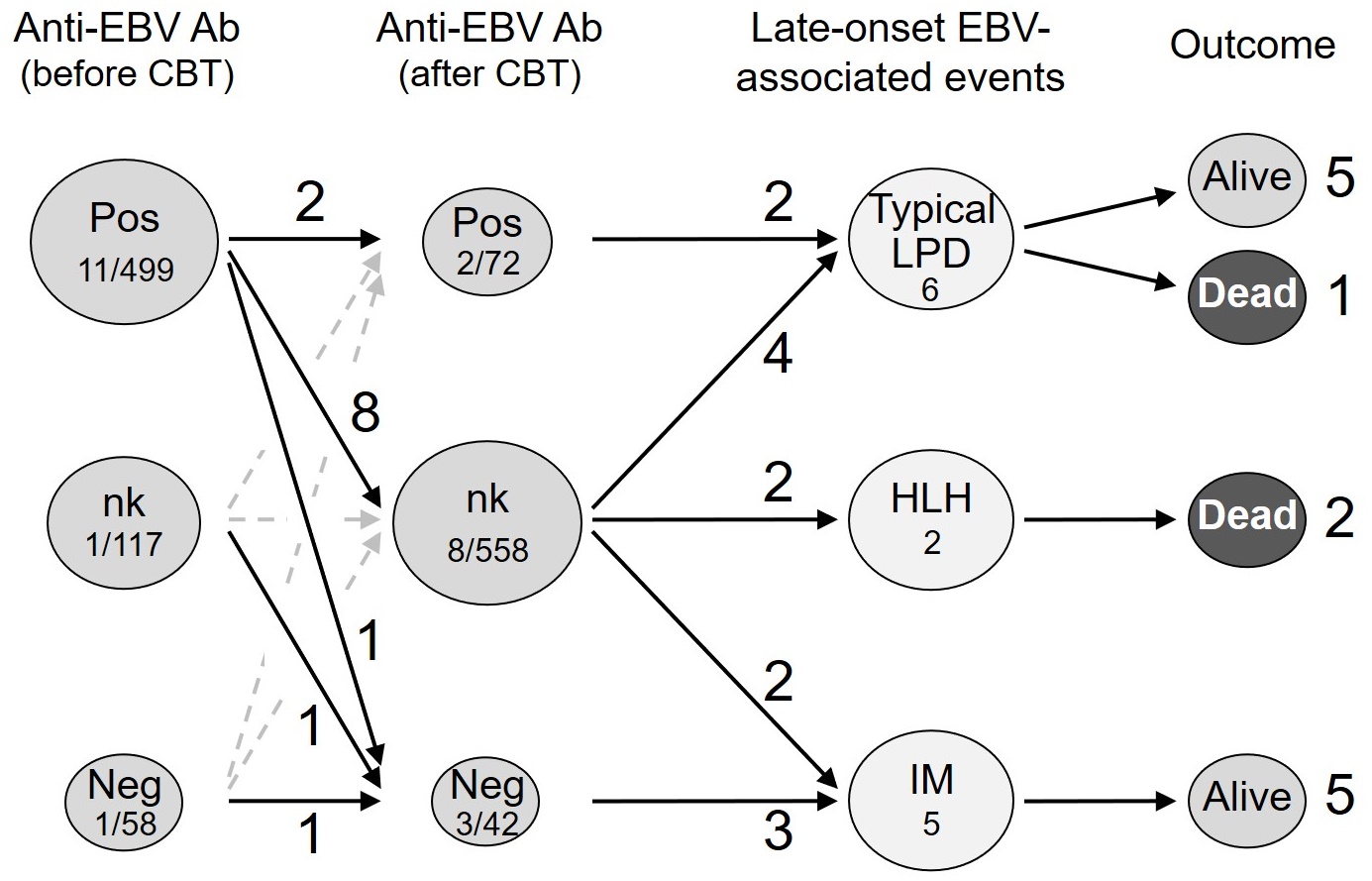 (ⅰ) Patients persistently positive for EBV before and after CBT

Among 62 patients who were persistently positive for the anti-EBV antibody before and after CBT, 2 (3.3%) developed late-onset EBV-associated events, with both showing typical LPD as the reactivation of EBV.

Three (7.1%) out of 42 patients who were negative for the anti-EBV antibody after CBT (regardless of the EBV status before CBT) developed late-onset EBV-associated events. The EBV status before CBT was positive in one patient, negative in one, and unknown in one. All three patients showed IM as the new infection (primary infection or re-infection/second primary infection) by EBV.

(ⅲ) Patients with an indeterminate EBV status after CBT

Eight (1.4%) out of 558 patients, whose anti-EBV antibody titers were not measured after CBT, developed late-onset EBV-associated events. All patients were positive for EBV before CBT. EBV-associated events were typical LPD in 4 patients, IM in 2, and HLH in 2. Among the 4 patients with typical LPD, the EBV status in one patient was presumed to be reactivation based on the anti-EBV antibody titer measured after its occurrence, and remained unknown in the remaining 3 patients. 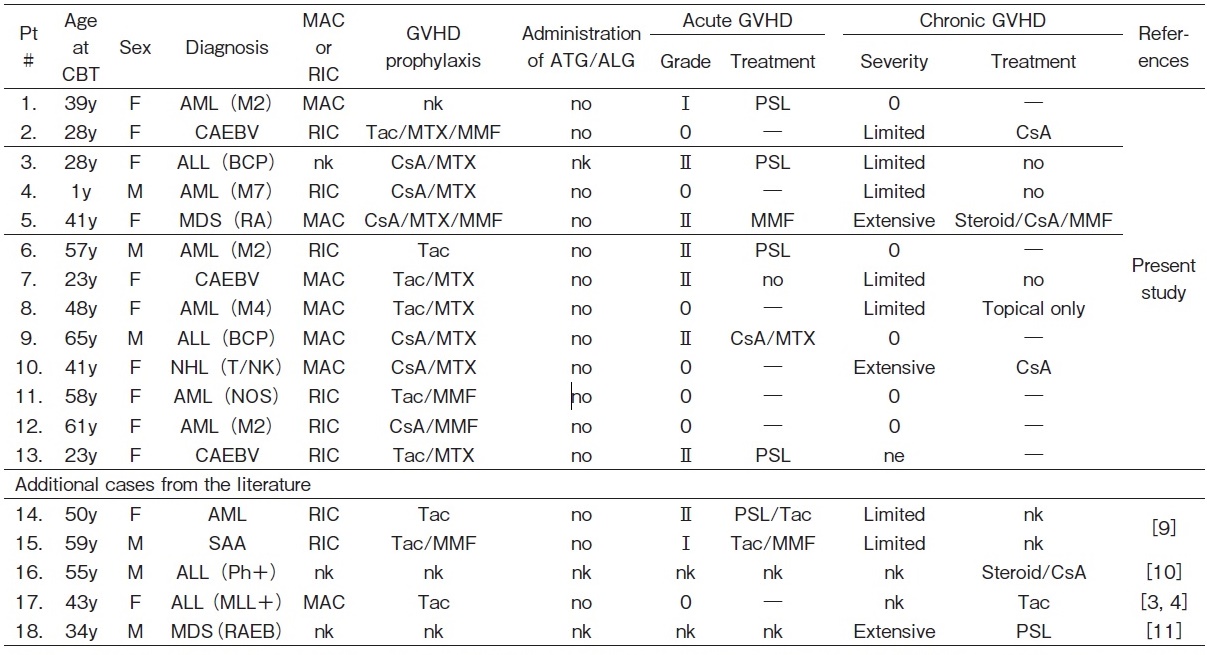 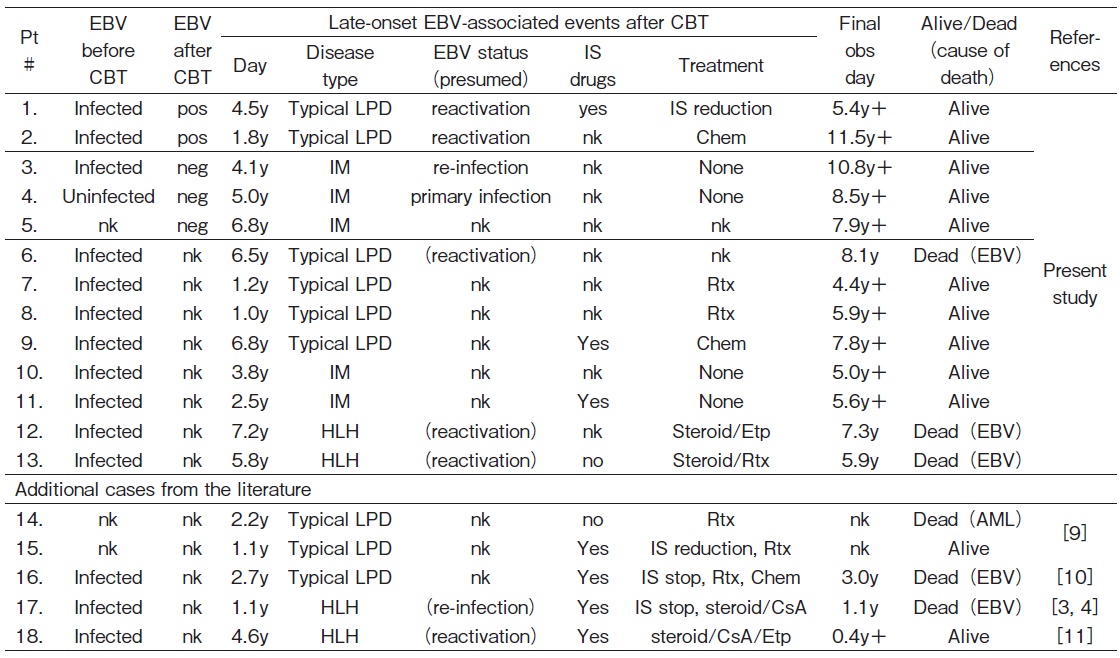 (ⅰ) Patients persistently positive for EBV before and after CBT

Both patients with typical LPD were successfully treated and are alive.

All three patients with IM recovered and are alive.

(ⅲ) Patients with an indeterminate EBV status after CBT

In the present study, HLH was presumedly due to EBV reactivation and was fatal in both patients. There were 2 additional cases of HLH among 5 Japanese patients with late-onset EBV-associated events in the literature, as shown in Table 3 and 43,4,9-11. One case of HLH was attributed to the re-infection by EBV after negative seroconversion, and the patient died3,4. The other case was presumedly due to the reactivation of EBV (with coinfection with varicella-zoster virus) and the patient is currently alive11. Therefore, HLH may occur in patients with new EBV infection and EBV reactivation, and its mortality was as high as 75% (3/4).

The negative seroconversion of the anti-EBV antibody might indicate the eradication of EBV after CBT. We used anti-EBV titer at least 1 year after CBT, based on our previous study5, to avoid a false positive by residual antibodies early after CBT and the adoptive antibodies from blood transfusions. Negative seroconversion, in the present study, was estimated to occur in 23% of previously EBV-infected patients, which was lower than that in the previous report5. In that report, the eradication rate was as high as 43%, however, the patient number was small, and the patient age was mostly under 10 years old. Indeed, in the present study, the rate of EBV eradication was as high as 40% in children (0-19 years old at CBT), comparing 11% in adults. One explanation of the different rate by age may be attributed to the difference between adults and children in personal activities such as deep kissing. Also, acute lymphoblastic leukemia is common in children, and the drugs for ALL have much suppressive effect on lymphocytes (including EBV-infected B cells). Another explanation may be the spread of EBV to organs other than B cells with aging, such as EBV infection to gastric epithelial cells, which accounts for 7.2% of gastric cancer12. In addition, the intensity of conditioning regimen can affect the rate of negative seroconversion, because the incidence of PTLD was reported to be higher for patients receiving reduced-intensity conditioning than that for patients receiving myeloablative conditioning13. Intensive conditioning might help eradicating EBV-infected B cells and EBV itself.

Among 42 patients negative for EBV after CBT regardless of the EBV status before CBT, the anti-EBV antibody titer was monitored in 28 patients. Sixteen of these patients were newly infected by EBV more than 1 year after CBT: 3 (11%) showed IM and 13 (89%) were asymptomatic, and generally recovered with no treatment or only supportive care. However, it is important to note that although it is rare, life-threatening (primary and second primary) EBV infection may occur3,4.

Late-onset EBV-associated events were observed in 5 out of 116 patients (4.3%) whose anti-EBV antibody titers were measured after CBT, and in 8 out of 558 patients (1.4%) whose titers were not. The incidence of these events was significantly lower in the latter group (P= 0.04). In contrast, none of the 5 patients whose titers were measured died of EBV-associated events, while 3 out of 8 patients whose titers were not evaluated died. Although the mortality rate was high in the latter group, it was not significant (P>0.1). Therefore, monitoring of the EBV status may have led to early detection and treatment initiation, whereas a delayed diagnosis resulted in severe illness.

In conclusion, among EBV-positive patients before CBT, negative seroconversion of the anti-EBV antibody was observed in 23% (19/81) more than 1 year after CBT. The incidence of late-onset EBV-associated events was 1.9% (13/674), and the mortality rate was 23% (3/13). Due to the life-threatening late events of EBV, it is important to monitor anti-EBV antibody titers annually after CBT. When EBV-associated events are suspected, the EBV-DNA load needs to be measured. The identity of the EBV-infected subset of lymphocytes and whether its origin is recipient- or donor-derived also need to be clarified. Early diagnosis and treatment initiation may prevent late-onset EBV-associated mortality.

The authors would like to thank Dr. Koyama-Sato M for helpful comments on second primary EBV infection. We thank Matsumoto K and Tomura M for their secretarial help. We would also like to give special thanks to all the doctors who participated in this survey for their co-operation.

The authors declare no conflict of interest associated with this article. Disclosure forms provided by the authors are available here.