Residual disease (RD) is one of the risk factors for relapse after hematopoietic stem cell transplantation (HSCT) in hematological malignancies. Although recent advances in the technology for detecting minimal/measurable RD, such as multiparameter flow cytometry and quantitative PCR, enable risk stratifications of disease relapse, these examinations still have limitations in routine clinical practice. In this study, we assessed RD in bone marrow (BM) specimens on day 0 of allogeneic HSCT by immunostaining of case-specific leukemic blast markers and analyzed the relationship between day 0 BM status and HSCT outcomes. We analyzed 82 adult HSCT recipients with myeloid malignancies. BM histology of day 0 revealed almost empty marrow with a small number of residual BM cells. However, residual blasts could be detected by immunostaining even for only a few cells. When patients were divided into two groups according to the existence of RD on day 0, those with positive RD showed significantly lower overall survival rate (27% vs. 73%, P<0.001) and higher cumulative incidence of relapse (46% vs. 9%, P=0.006) at one year compared to those with negative RD. Furthermore, even if they were not in remission at the point of the pre-conditioning evaluation, the patients who achieved negative RD on day 0 showed comparable prognosis with those who maintained remission before conditioning. This study shows the efficacy of day 0 BM pathology of allogeneic HSCT as a prognostic factor that can contribute to clinical decisions on post-transplant strategies.

Allogeneic hematopoietic stem cell transplantation (allo-HSCT) is a curable therapy for hematological malignancies. However, relapse remains an obstacle for patientsʼ survival1,2. Minimal/measurable residual disease is considered as one of the risk factors for relapse after allo-HSCT3,4. It is widely known that patients without hematological remission have poor outcomes after allo- HSCT5,6. In a previous report of refractory acute myeloid leukemia (AML) and myelodysplastic syndrome (MDS), low leukemia burden, less than 5% blasts in bone marrow (BM) with the absence of peripheral blood blasts at the time of transplant, showed better overall survival (OS) than higher leukemia burden with more BM blast counts and circulating blasts7. Recent advances in the technology for detecting minimal residual disease including multiparameter flow cytometry, quantitative PCR and next-generation sequencing also enabled identification of poor responders to chemotherapy and provided risk stratifications8-10. However, they are based on the evaluation before conditioning treatment in the setting of allo- HSCT.

In patients with residual diseases (RD), BM status at the point of stem cell infusion, namely after conditioning treatment, potentially differs from that of pre-conditioning assessment, depending upon the response to conditioning chemotherapy and irradiation or proliferative potency of the residual blasts. Therefore, the evaluation of disease status on day 0 marrow could predict posttransplant outcomes and help planning upfront posttransplant strategies for residual diseases. In the present study, we histopathologically evaluated the BM on day 0 of allo-HSCT and its impact on outcomes after allo- HSCT.

We retrospectively analyzed a total of 82 consecutive adult patients who received a first allo-HSCT for AML or MDS with excess blasts (MDS-EB) between 2010 and 2014 in Japanese Red Cross Nagoya First Hospital. Patients with extramedullary diseases were excluded from the study. This study was approved by the ethical committee of our institutional review board and all patients provided informed consent in accordance with the Declaration of Helsinki.

BM examinations were performed routinely before conditioning treatment and on day 0 of stem cell infusion. BM clot sections before conditioning treatment and the day of stem cell infusion were examined by histopathology and immunostaining. All specimens were fixed in 10% formalin solution and embedded in paraffin. All slides were stained with hematoxylin and eosin as well as with the naphthol AS-D chloroacetate esterase plus Giemsa double staining (ASD-G) method. Immunostaining was conducted using a Leica Bond-IIITM according to instruction manuals (Leica Biosystems, Newcastle, UK). CD7, CD34, CD56, CD117 (c-kit), TdT, and p53 antibodies ( Leica Biosystems, Newcastle, UK) were used in this study. Antibodies were selected according to the specific blast tumor phenotypes in individual cases.

Neutrophil engraftment post allo-HSCT was defined as the achievement of an absolute neutrophil count≥500/mm3 for three consecutive days. Myeloablative conditioning ( MAC) was defined as a conditioning regimen with at least 8 Gy of total body irradiation or busulfan administration over 16 mg/kg. All other regimens were categorized as reduced-intensity conditioning (RIC).

BM clot sections of pre-conditioning and day 0 stained with ASD-Giemsa and anti-CD34 antibody are shown in Figure 1. BM histology of Day 0-RD- revealed almost empty marrow with a small number of residual mature granulocytes, erythroblasts, lymphocytes and macrophages compared with normoplastic BM before conditioning treatment (Figure 1A). Although BM blasts could be identified by ASD-G staining in few cases, residual blasts were able to be detected even for only a few cells by using immunostaining of case-specific markers in BM of Day 0-RD+ group (Figure 1B). 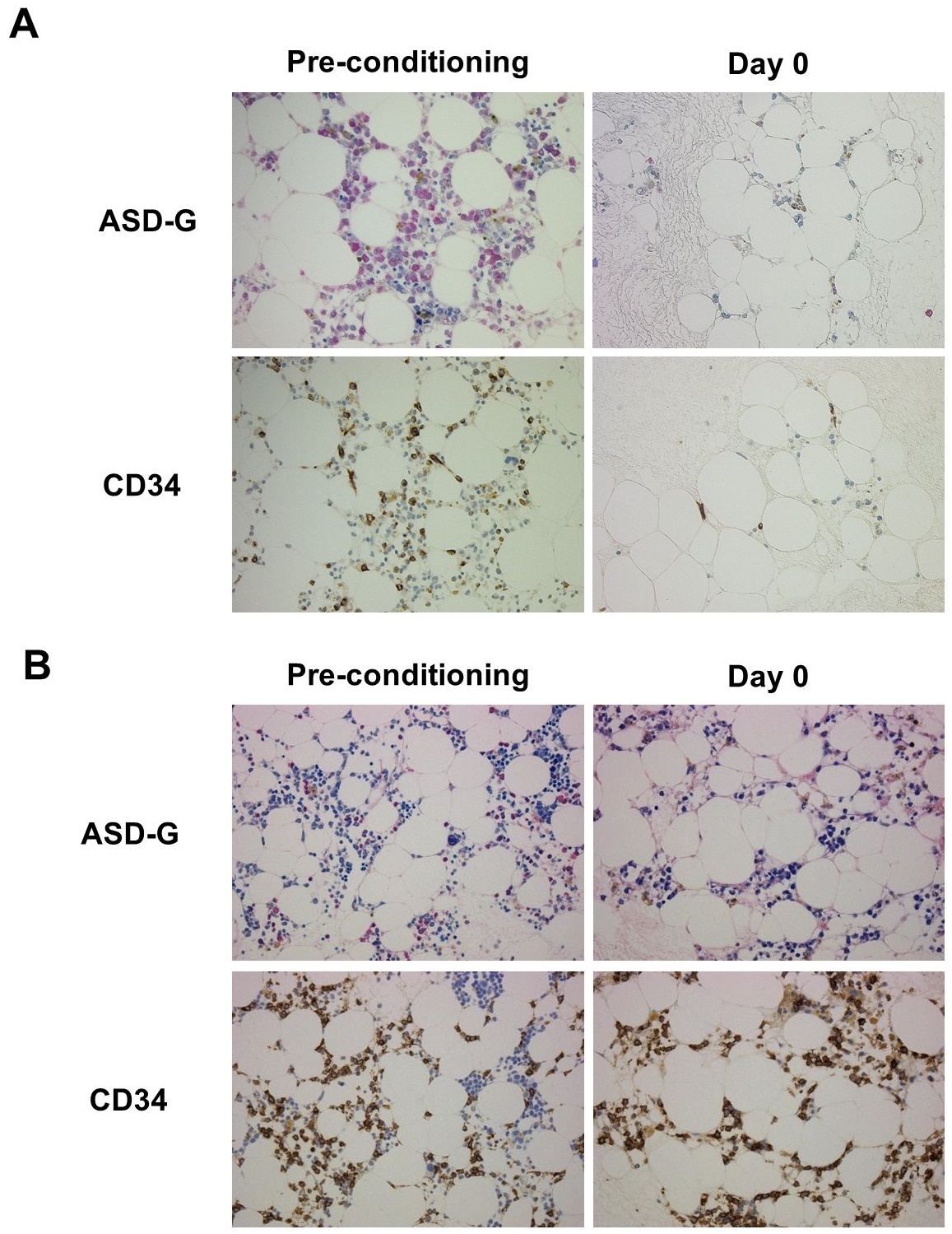 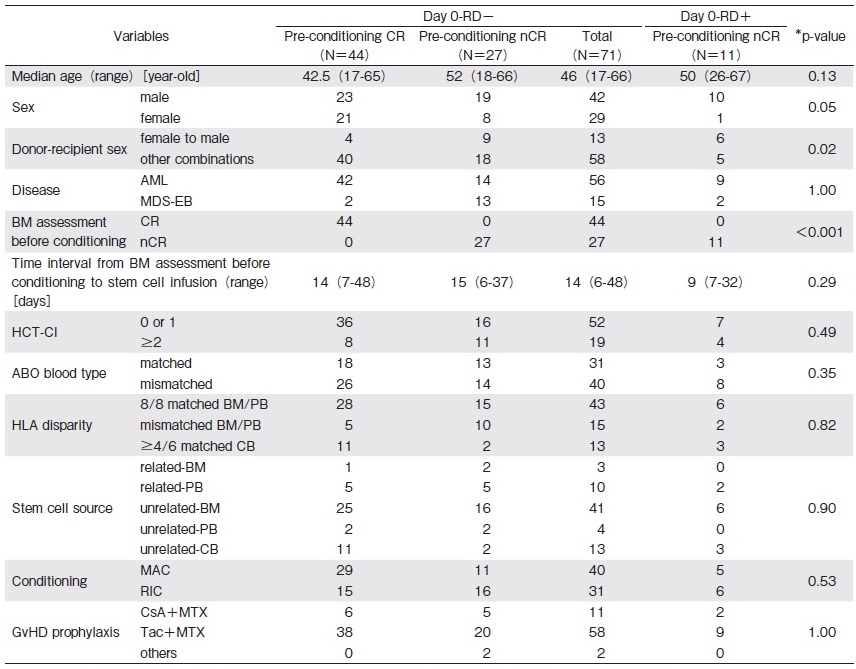 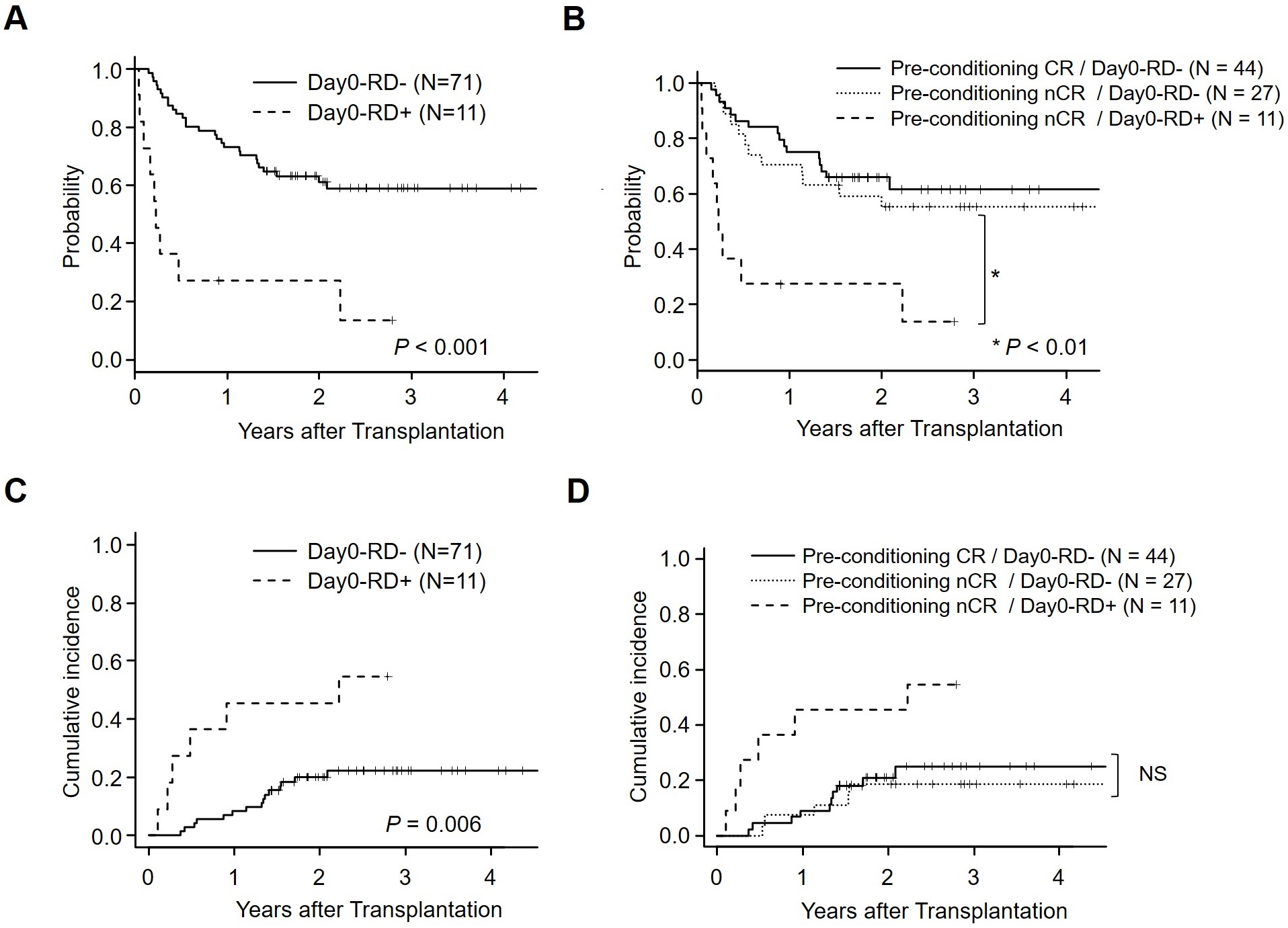 Relapse after allo-HSCT remains an obstacle to long- term survival in myeloid malignancies12. Therefore, a novel marker to predict relapse is warranted. In this study, we described the efficacy of evaluating day 0 BM of allo- HSCT after completing a conditioning treatment on predicting OS and relapse, providing a new risk stratification that Day 0-RD+ is an independent risk factor for both OS and relapse, whereas Day 0-RD- represents better OS, even if they were not in CR before conditioning treatment as routinely evaluated. Furthermore, patients who were not in CR at the point of pre-conditioning evaluation showed a comparable prognosis to those with CR before conditioning if they achieved negative RD in the day 0 marrow. Of note, residual blast count of pre-conditioning BM was not significantly associated with that of day 0 marrow, suggesting that the status of day 0 BM more specifically predicts the outcomes after allo-HSCT than disease status assessed before conditioning.

In previous reports, the presence of residual AML cells detected by flow cytometry before RIC was associated with significantly increased relapse, shorter disease-free survival, and poorer OS after allo-HSCT, indicating achieving flow cytometric CR is critical to achieve before conditioning treatment13. As the cellularity of day 0 marrow is severely hypoplastic and insufficient to perform flow cytometry to analyze their residual diseases (Figure 1A), we used immunohistochemistry of BM clot sections to detect residual blasts in the present study. In this study, minor residual blasts were easily detected even in severely hypoplastic marrow using immunostaining of case-specific blast markers (Figure 1). With this method, residual blasts in BM can be assessed faster and at lower costs than quantitative PCR and next-generation sequencing8,14. Furthermore, this technique can easily be performed in standard hematopoietic stem cell transplantation hospitals. On the other hand, the main limitation of this study is that the detection sensitivity of our method was not validated. Although the existence of histopathological residual diseases in day 0 marrow was shown to be a poor prognostic marker in our cohort, BM clot sections are supposed to have histological heterogeneity. Furthermore, the other limitation which may have impacted our findings is that other risk factors of primary diseases such as adverse cytogenetics and genetic alterations were not available for our prognostic analysis15,16. Combined with more sensitive methodologies such as quantitative PCR and next-generation sequencing, more significant and clearer impact of day 0 marrow status on outcomes post allo-HSCT could be described in hematological malignancies.

This is a retrospective analysis in a single institution where day 0 BM was routinely examined. However, BM aspiration on the day of allo-HSCT is not widely performed in clinical practice. The clinical significance of minimal/measurable RD has been reportedly assessed in BM before conditioning treatment8-10. Because all the patients in CR before conditioning treatment showed Day 0-RD- as expected, our results suggest that Day 0 BM evaluation is necessary for only patients in nCR at the point of pre-conditioning assessment to minimize the risk of this invasive procedure.

Regarding the intensity of conditioning, MAC rather than RIC reportedly reduced the incidence of relapse and improved disease-free survival and OS rate after allo- HSCT in patients with residual leukemia17,18. In our analysis, the intensity of conditioning was not significantly associated with the status of RD on day 0 or outcomes including OS and relapse rate by multivariate analyses. In addition, especially in MDS-EB, blast percentage at preconditioning was not associated with day 0 BM status. Therefore, it can be speculated that day 0 BM status reflects sensitivity to conditioning treatment.

In the setting of allo-HSCT, disease relapse can occur when graft-versus-leukemia effects are insufficient to suppress the residual disease19. In the Day 0-RD+ group, one patient achieved as long as 684 days of disease-free survival by controlling immunosuppressants and chronic graft-versus-host-disease. Our results suggest that day 0 BM assessment carries the potential to prevent relapse in patients with Day 0-RD+ status by early intervention to intensify graft-versus-leukemia effects, such as rapid withdrawal of immunosuppressants or donor lymphocyte infusions12,20-22.

In summary, we demonstrated the efficacy of immunostaining using blast-specific markers to evaluate residual diseases on day 0 BM of allo-HSCT for the first time. This was a retrospective study including a limited number of patients at a single institution. Therefore, a study in a larger cohort is warranted to confirm the results. Nevertheless, our analyses suggest the detection of Day 0-RD status is a novel prognostic factor that can clinically contribute to constructing post-transplant strategies for improving outcomes in myeloid malignancies.

The authors thank all of the patients who consented to participate in this study.

The study concept and design were developed by TS, NK, KM, and MI. Clinical data collection was performed by TS, NK, and YK. Bone marrow specimens were pathologically assessed by MI. Data analyses and manuscript drafting were done by TS and NK. Discussions involved all authors. Administrative and material support was provided by KM and MI. This study was supervised by MI and KM.

The authors declare no coflict of interest. Disclosure forms provided by the authors are available here.

22. Chang YJ, Huang XJ. Donor lymphocyte infusions for relapse after allogeneic transplantation: when, if and for whom? Blood reviews. 2013; 27: 55-62.