Hematopoietic stem cell transplantation (HSCT) is now widely practiced worldwide. It has the potential to cure many hematological diseases, such as acute leukemia and thalassemia. As an emerging country, Malaysia has made advancements despite many challenges. HSCT has evolved rapidly since the first pediatric allogeneic HSCT case in 1987. The first adult HSCT was performed 5 years later in 1993. Currently, a total of 13 hospitals offer HSCT services throughout Malaysia. These include private healthcare services, substantially funded government hospitals governed by the Ministry of Health, and partially funded teaching hospitals governed by the Ministry of Education. Until 2015, 1,987 allogeneic and 1,648 autologous HSCT procedures were performed. This article narrates the history and development of HSCT in Malaysia and briefly discusses the challenging issues in this area.

The first pediatric hematopoietic stem cell transplantation (HSCT) was performed at the University of Malaya Medical Center in 1987, followed by an adult HSCT in 19931,2. Since then, HSCT in Malaysia has rapidly evolved. At present, a total of 13 hospitals offer HSCT services throughout Malaysia, including private healthcare services, substantially funded government hospitals governed by the Ministry of Health, and partially funded teaching hospitals governed by the Ministry of Education. Twelve of the centers are within the Malaysian Peninsular and the other is in the Malaysian Borneo (Table 1) 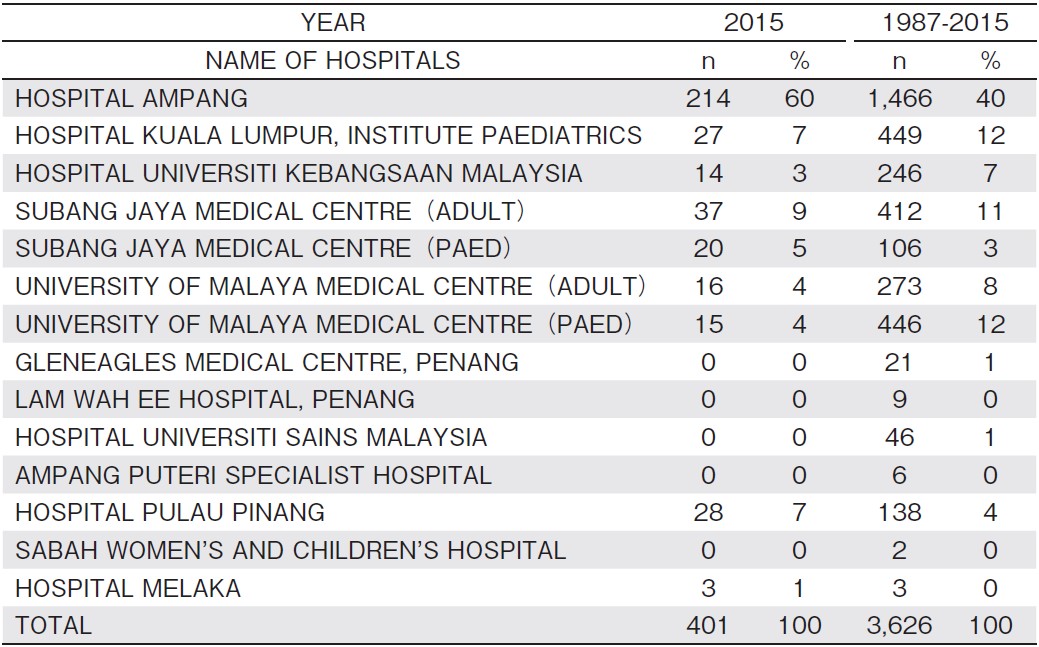 The Malaysian Stem Cell Registry (MSCR) was first established in 2000. It was a collaborative effort between the Ministry of Health (Medical Development Division and Institute of Medical Research) and the National Cancer Council Malaysia (MAKNA) 1. The registry aims to promote and recruit donors for bone marrow and peripheral stem cell transplantation. To date, 31,200 donors have been registered. In 2003, the Cord Blood Bank Unit was established alongside the MSCR. This was based on convincing evidence for the use of hematopoietic stem cells, sourced from umbilical cord blood, as an alternative to bone marrow transplantation, especially for hematological, immunological, and metabolic storage disorders in children and young adults. Cord blood units (CBU) help overcome shortages for patients requiring HSCT, especially those having no suitable family members or having unrelated donors2. CBUs are obtained, with consent, from maternity wards in four hospitals within Kuala Lumpur and a single hospital in Alor Setar. There are 7,450 CBUs available at present. In 2014, the National Stem Cell Coordinating Center, which is based at the National Blood Bank, was established to better facilitate HSCT from unrelated donors. It provides a one-stop center for identification and coordination of transplantation from donors and CBUs and facilitates the matching process among unrelated stem cell transplant donors and receivers.

Indications and Characteristics of HSCT in Malaysia

The number of HSCTs in Malaysia has increased rapidly over the years (Figure 1) 3. In 2015, 401 HSCTs were performed (Table 2) 3. The majority of HSCTs involved patients diagnosed with acute leukemia and lymphomas, followed by plasma cell dyscrasia and hemoglobinopathies. A total of 3,626 HSCTs were performed from 1987 through 2015; 1,978 allogeneic and 1,648 autologous HSCTs. The majority (78%) of hematopoietic stem cells (HSC) were sourced from a combination of marrow stem cells with peripheral blood or peripheral blood alone. Other sources of HSC include the bone marrow (19%) and both bone marrow with cord blood (3%) or cord blood alone3,4. 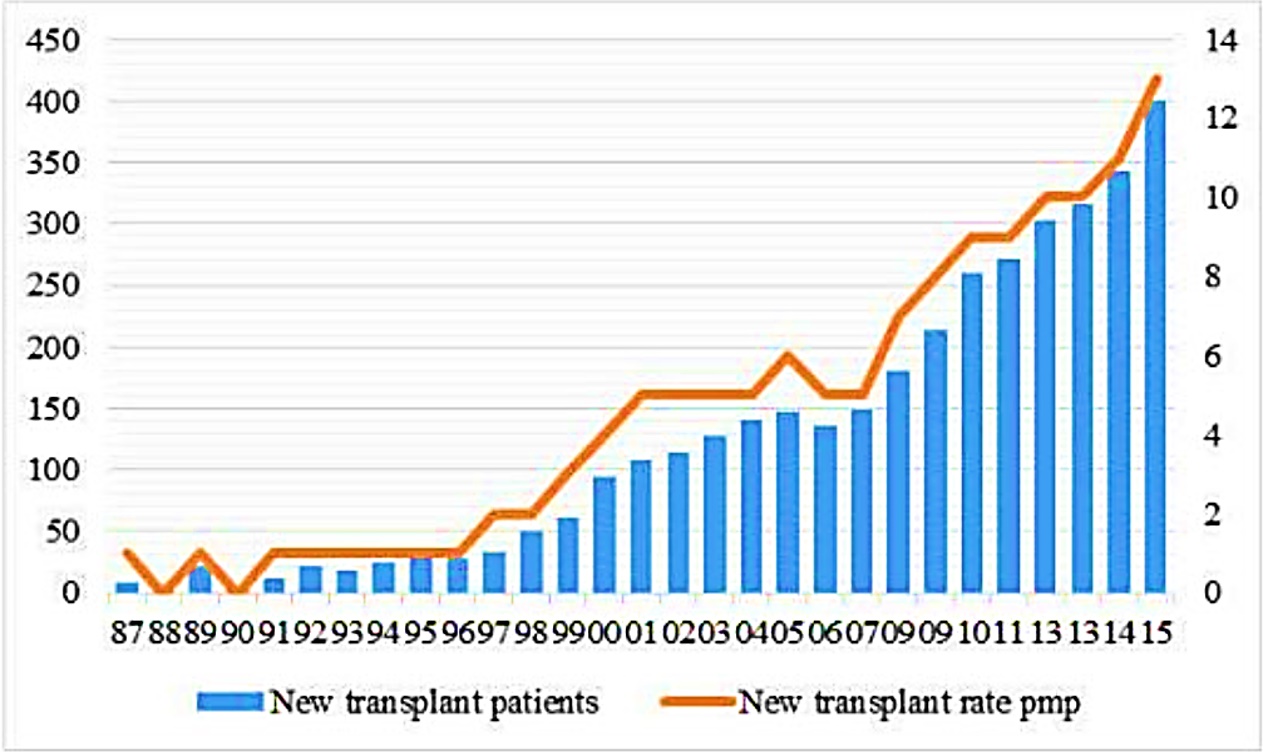 The majority of HSCTs involve Human Leukocyte Antigen (HLA) -matched siblings (88%), followed by matched unrelated donors (3%). The remainder includes syngeneic transplantation and related and unrelated HLA-mismatch donors. In 2016, 148 allogeneic and 212 autologous HSCTs were performed. Notably, this was the year that haploidentical family donors surpassed matched unrelated donors. The use of haploidentical family donors as an alternative source of HSCs in Malaysia has followed the trend observed in other countries i. e., an increase in the number of cases. Haploidentical HSCT has enabled all patients to find a donor and compared to matched unrelated donors (MUD), it also has the advantages of lower cost and faster graft acquisition. In addition, outcomes from haploidentical HSCTs have also greatly improved over the years with better methods preventing graft versus host disease and the increasing experience of transplant center personnel. 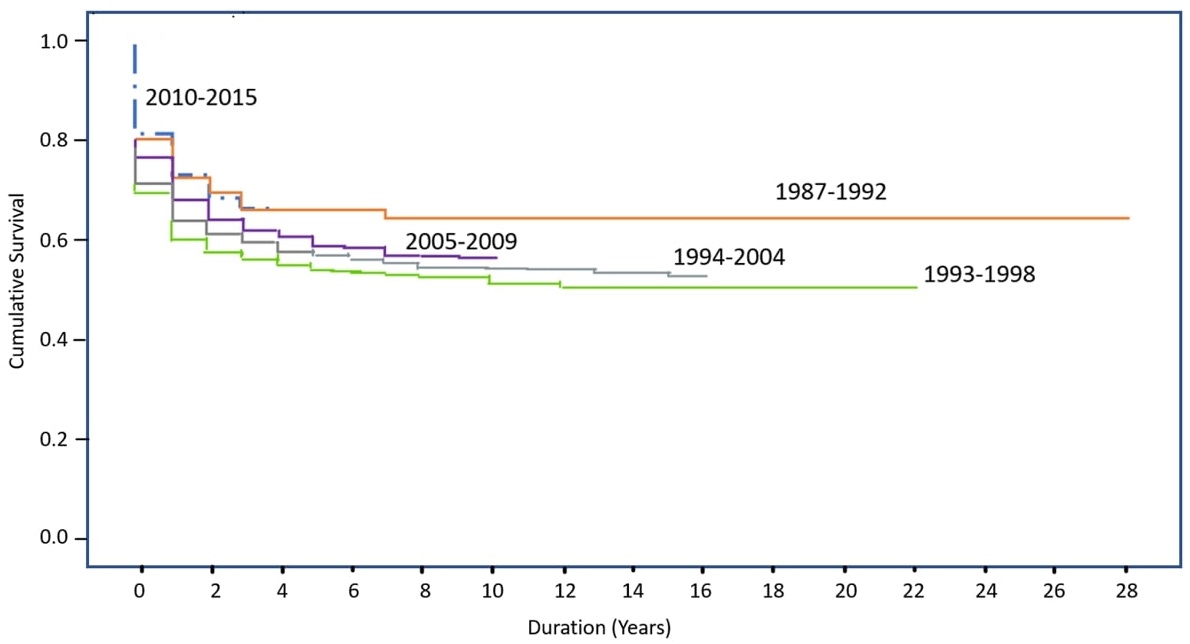 There are multiple issues pertaining to HSCT in Malaysia, especially funding for the transplant. Other issues include availability of both laboratory facilities and unrelated donors. The numbers of voluntary donors in our local registry remains small. More efforts are needed to promote awareness and to encourage volunteer donors. Education and proper counseling at the time of prerecruitment remains pertinent to ensure donors are fully committed. Procurement of stem cells from MUD is not financially supported by our government at this currently, although the transplantation itself is heavily subsidized in government hospitals. Increasingly, patients and hospitals are opting for haploidentical related donors as an alternative because of the high cost of procurement of MUD stem cells from overseas.

Appropriate laboratory facilities are essential for HSCT. A pre-transplant workup includes HLA typing for both patient and donor. High resolution HLA typing was previously only available at the Institute of Medical Research. Recently in 2018, the University of Malaya Medical Center begun offering this service in collaboration with an overseas laboratory. Additionally, as posttransplant viral infection remains a common complication, identifying and monitoring such infection is essential. Unfortunately, the facilities and expertise required for this remain limited to a few centers. Financial constraints have affected the training and education of service providers as well as the setting up of necessary facilities. A unique, albeit complex, trait of our healthcare system includes the provision of service by three major sectors: the Ministry of Health, Ministry of Education (MOE), and private healthcare services. Thus, services surrounding stem cell transplantation are unsynchronized, as subsidization and source of financial assistance differ between these sectors. For example, under the MOE, patients requiring stem cell transplantation may only be partially subsidized if deemed eligible. Generally, the cost of transplantation is estimated at RM 50,000 or USD 15,000. Further financial assistance, if required, often depends on eligibility for social welfare support. Conversely, the cost in the private sector is much higher, up to RM 200,000 or USD 50,000.

Over time, HSCT outcomes have markedly improved and are presently very encouraging. With the increase in transplant centers throughout the country, the number of transplantations in Malaysia is expected to rise in the future. Haploidentical donor transplantations that have begun in a few centers will further rapidly increase in number. The future of transplantation in Malaysia could be further improved if the stakeholders would commit to resolving the issues, especially those of a financial nature, which we are currently facing.