Currently, there is no standard therapy available for relapsed acute leukemia after allogeneic hematopoietic cell transplantation (allo-HCT). In this study, we evaluated the efficacy of cytoreduction with cytarabine followed by granulocyte colony-stimulating factor (G-CSF) -primed donor lymphocyte infusion (DLI) for patients with acute leukemia who relapsed after allo-HCT. We retrospectively reviewed 255 patients who had received allo-HCT for acute leukemia/myelodysplastic syndrome. Patients were divided into two groups based on the CD34+ cell dose they received during the initial transplantation; patients in the lower CD34+ group received a dose lower than 6×106 cells/kg and those in the higher CD34+ group received a dose higher than 6×106 cells/kg. No significant differences were noted between two groups with respect to overall survival, relapse-free survival, or graft-versushost disease (GVHD) -free/relapse-free survival. Patients who relapsed after allo-HCT (n=93) were assigned into early or late relapse groups using the median time to relapse as the threshold. Among the 93 patients with relapse, 39 received G-CSF-primed DLI. The median dose of CD3+ cells was 2.82×107 cells/kg (range: 0.05-10.1). In the late relapse group, one-year overall survival was significantly higher in patients receiving DLI than that in patients not receiving DLI (53.4% ±7.4% vs. 26.7% ±7.4%; P=0.039), whereas no DLI effect was detected within the early relapse group. In addition, the incidence of DLI-induced GVHD did not differ between the two groups. In conclusion, treatment with G-CSF-primed DLI after allo-HCT with a limited CD34+ cell dose constitutes a feasible and effective option, which could replace second HCT in treatment of late-relapse patients.

Allogeneic hematopoietic cell transplantation (allo- HCT) is a potentially curative therapy for acute leukemia1. However, patients with acute leukemia who relapse after allo-HCT show poor prognosis with a median survival of 34 months2. A second allo-HCT results in a longterm survival rate of only 10-35% with a higher treatment- related mortality. Currently, no standard treatment approach is available for relapsed acute leukemia3,4.

Induction of graft-versus-leukemia (GVL) effects with donor lymphocyte infusions (DLIs) is an attractive option for patients with relapsed hematological malignancies. However, GVL efficacy depends on disease subtype and tumor burden at the time of DLI3,5. Schmid et al. demonstrated an overall survival (OS) benefit of DLI in patients with acute myelogenous leukemia (AML) who relapsed after allo-HCT (20% ±3% vs. 9% ±2%; P<0.001) 6. Several different strategies have been explored to improve patient outcomes, such as dose-escalation of DLIs, addition of immunosuppressive agents to prevent graft-versus- host disease (GVHD), and modified DLI treatment with granulocyte colony-stimulating factor (G-CSF) 7-10. A combination of chemotherapy and DLI showed promising results11. Here, we investigated the effect of cytoreduction with a high dose of cytarabine followed by DLI. A pilot study performed at our institution reported a beneficial effect of cytarabine combined with G-CSF-primed DLIs using cryopreserved cells on patients with hematological malignancies who relapsed after allo-HCT12. This strategy was cost-effective and convenient for donors. In the current study, we aimed to determine the effectiveness of cytarabine in combination with G-CSF-primed DLI in treatment of patients with acute leukemia who relapsed after allo-HCT.

We conducted a retrospective review of the medical records of 255 patients who received allo-HCT for AML, myelodysplastic syndrome (MDS), or acute lymphoblastic leukemia (ALL) between December 1998 and August 2013 at the Department of Hematology/Oncology, Kyungpook National University Hospital (KNUH). Clinical and laboratory data were collected from electronic medical records according to protocol approved by the KNUH institutional review board.

The risk status at transplantation was determined based on previously published classification schemes13. Poorrisk cytogenetics were classified according to the revised Medical Research Council classification system for AML and the International Prognostic Scoring System for MDS14,15. Poor-risk cytogenetics for ALL were defined as MLL rearrangement, BCR/ABL1 translocation, hypoploidy, or complex karyotype. Graft failure was defined as the lack of myeloid engraftment in patients surviving in remission for at least 28 days after transplantation. The Keystone staging system was used to score acute GVHD (aGVHD) and chronic GVHD (cGVHD) 16,17. Relapse was defined as the reappearance of leukemic cells in the peripheral blood, bone marrow, or extramedullary lesions after allo-HCT.

Preparative regimens for allogeneic peripheral blood stem cell transplantation (PBSCT) included busulfan (Bu, 4 mg/kg PO or 0.8 mg/kg IV for 4 days) and cytoxan (Cy, 60 mg/kg for 2 days) administered to 100 patients; Bu (3.2 mg/kg for 2-4 days) and fludarabine (Flu, 30 mg/m2 for 6 days) administered to 135 patients; and total body irradiation and Cy (60 mg/kg for 2 days) administered to 20 patients. PBSCs were mobilized with 10μg/kg per day G-CSF[filgrastim (Leukokine®; CJ, Co., Korea) or lenograstim (Neutrogin®; Chugai Co. Ltd, Tokyo, Japan) ]alone (n=183, 71.8%) or in combination with a concurrent regimen of 5μg/kg per day G-CSF and 5μg/kg per day granulocyte macrophage colony-stimulating factor (GM-CSF) (n=72, 28.2%) from the donor. Administration of G-CSF with or without GM-CSF was continued, and apheresis was repeated every morning until the targeted cell dose (6×106 CD34+ cells/kg) was reached. GVHD prophylaxis consisted of methotrexate ( MTX) and cyclosporine A (CyA) or MTX and tacrolimus (Tac).

Collection and infusion of donor lymphocytes

Collecting the targeted amount of PBSCs (more than 6×106 CD34+ cells/kg) allowed us to cryopreserve some PBSCs, including several CD3+ cells at the time of harvest for transplantation. The extra cells were cryopreserved with dimethyl sulfoxide in a nitrogen tank. DLI with cryopreserved cells was available only for patients who were able to receive more than 6×106 CD34+ cells/kg from donors. Other patients would receive salvage chemotherapy or second transplantation when they relapse.

For those patients who relapsed after allo-HCT, DLI was promptly performed using the cryopreserved cells. The CD3+ cell-count was determined by flow cytometry and used to calculate the DLI dose. Before DLI, immunosuppressive agents were discontinued and patients received pre-DLI chemotherapy with high-dose cytarabine ( 1 g/m2; twice a day on days 1, 3, and 5). No patient received prophylactic immunosuppressive therapy after DLI.

The chimerism status, which was assessed by the number of tandem repeats or short tandem repeats, was compared before and after DLI. All patients underwent a bone marrow examination within 60 days after DLI or sooner (if clinically indicated) for the assessment of the response. 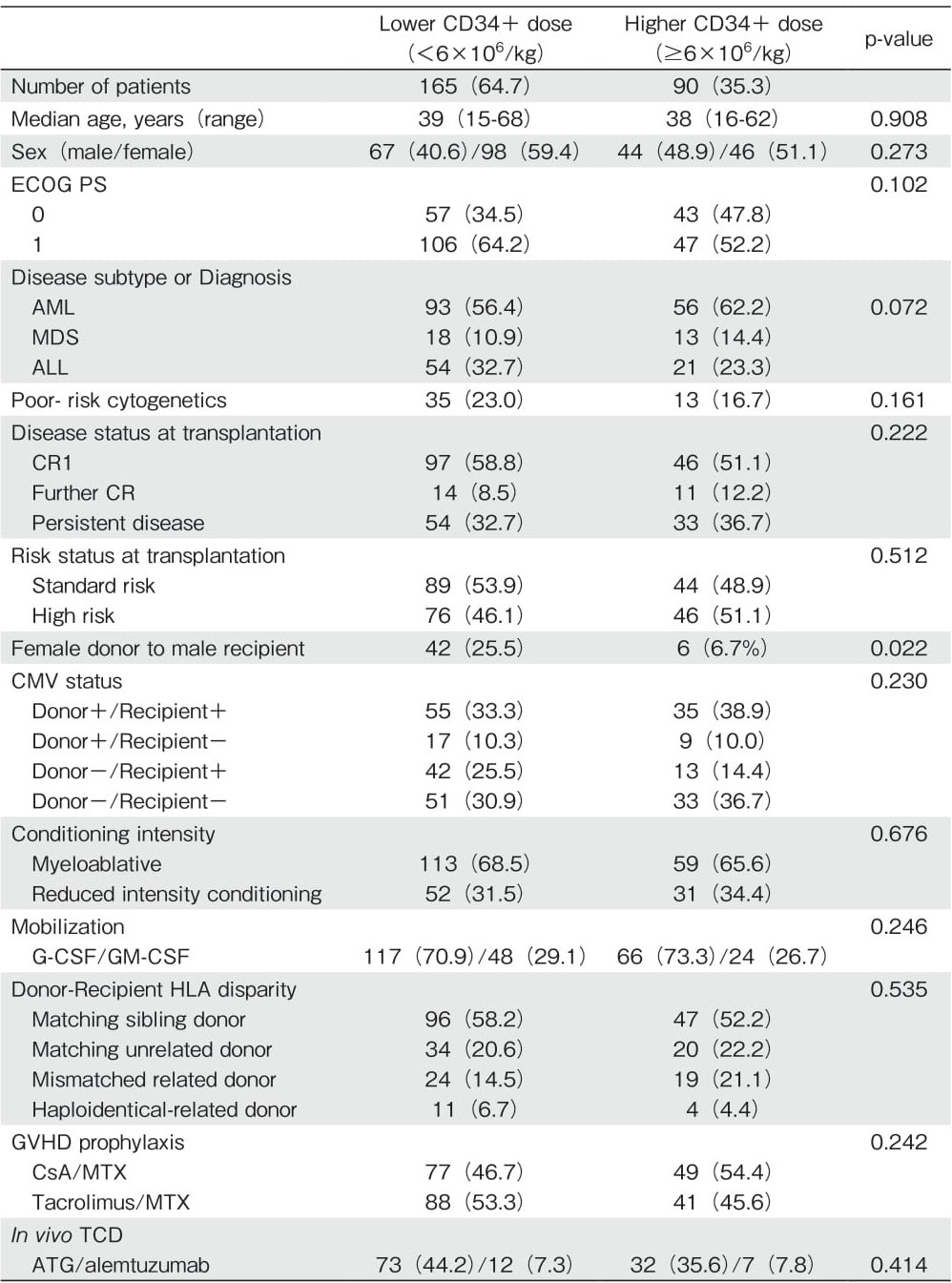 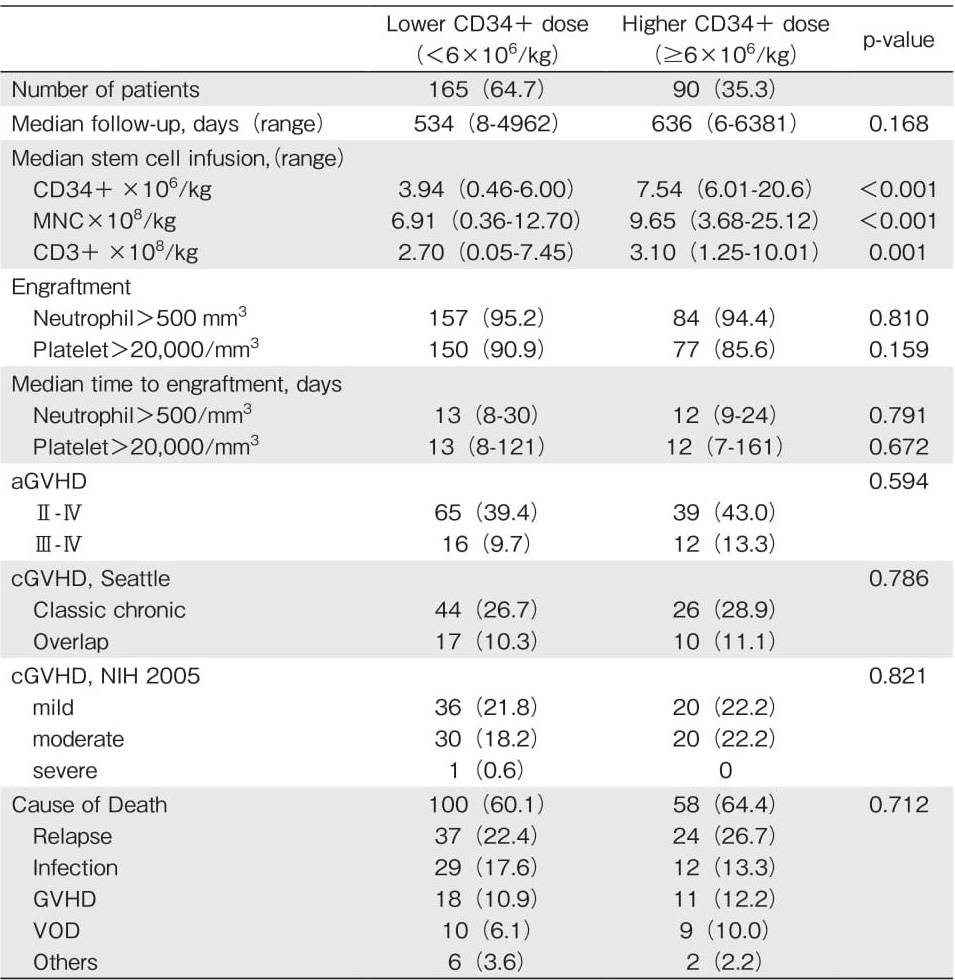 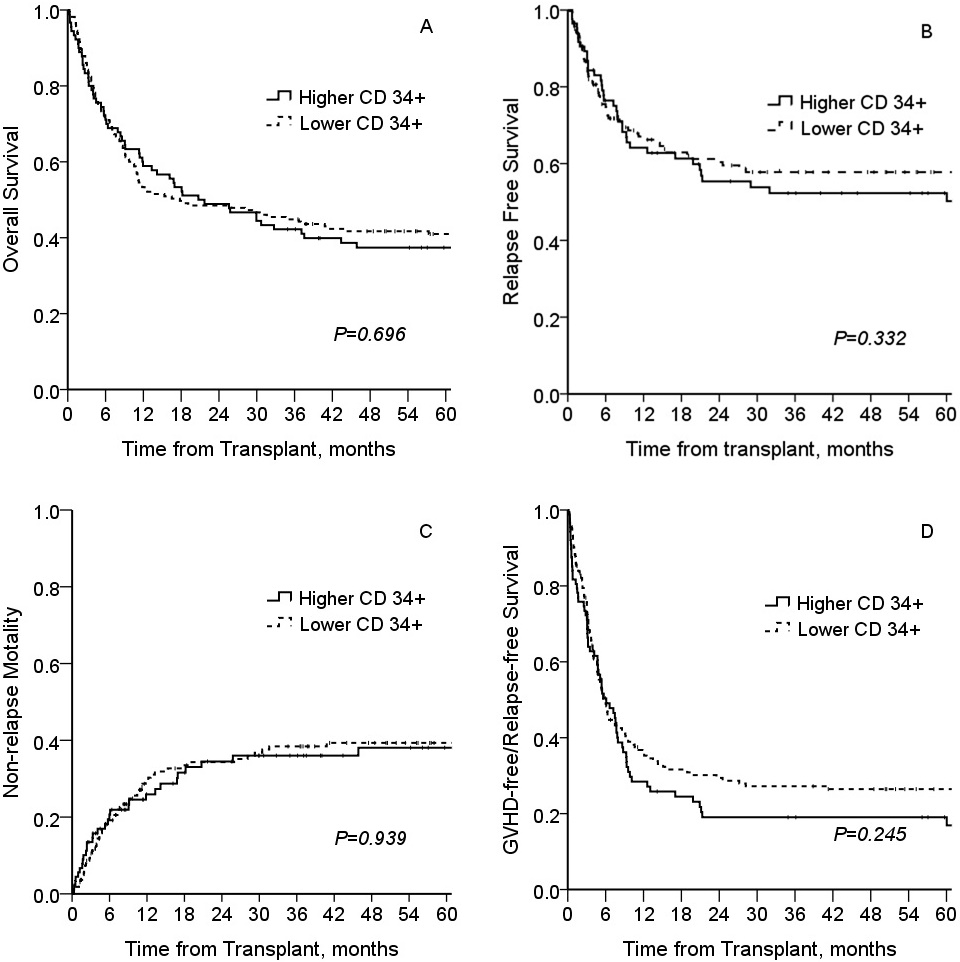 Table 5. Outcomes of DLI treatment according to post-transplantation remission duration 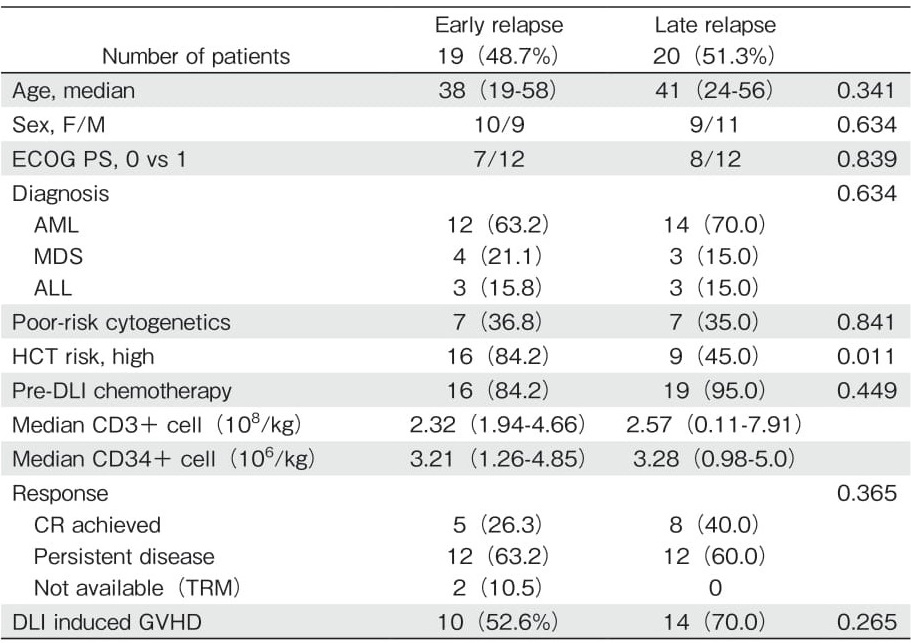 Post-transplantation remission duration was divided by the median RFS of 4.6 months

The current study investigated the efficacy of cytarabine- based chemotherapy in combination with G-CSFprimed DLI in patients with acute leukemia who relapsed after allo-HCT. G-CSF-primed DLI treatment after allo- HCT with a limited CD34+ cell dose (lower than 6×106 cells/kg) constituted a feasible and effective option in terms of GRFS, donor convenience, and cost. Moreover, this treatment option may replace a second HCT for laterelapse patients. Although stem cell dose has already been explored in relation to the incidence of GVHD, relapse, and survival, no consensus has been reached21-23.

Regarding CD 34+ cell dose for allogeneic PBSCT, higher CD34+ dose (higher than 8×106 cells/kg) resulted in better neutrophil and platelet recovery, and was associated with development of chronic GVHD, but was not correlated with improved survival. Optimal CD34+ dose seemed to be dependent on donor type and stem cell source24.

Preliminary results from our institution demonstrated that CD34+ cell transplantation with a dose of higher than 6×106 cells/kg did not improve refined GRFS (median survival 5.5 months vs. 6 months, P=0.245; Figure 1D). Moreover, a higher CD34+ cell dose did not increase the neutrophil or platelet engraftment rate. As the current study found no correlation between the CD3+ and CD34+ cell numbers in the harvested cells (Spearman correlation coefficient, P=0.307), it is planned to limit the CD34+ cell dose (6×106 CD34+ cells/kg) for transplantation and cryopreserve the rest of the harvested cells for relapse or prophylactic use.

Cryopreservation for the purpose of future DLI was not performed in patient group who received a dose of lower than 6×106 CD34+ cells/kg in the initial allo-HCT.

This retrospective study has several limitations, including the heterogeneity of patients and transplant characteristics. Furthermore, DLI treatment has a minimal effect in the case of a rapidly advancing disease, as evidenced in patients with early relapse who experienced no benefits from DLIs. However, patients with longer post-transplantation remission duration showed better PRS in the DLI group (Figure 2B; 1-year OS: 46.7% ±12.9% vs. 21.7% ±8.9%, P=0.039).

A second allo-HCT is regarded as the optimal option for patients who relapse after the first transplantation. Yet, it is only available for a limited number of patients due to concerns of high mortality and unavailability of donors. Thus, for the late relapse group, DLI treatment may replace second HCT. A faster recovery can also be expected in the case of chemotherapy followed by G-CSF-primed DLI treatment with a sufficient number of CD34+ cells. Regarding GRFS, allo-HCT with a limited CD34+ cell dose (lower than 6×106 cells/kg) is not inferior to allo-HCT with a higher CD34+ cell dose. Moreover, the surplus cells from the harvest can be cryopreserved at the time of the first transplantation. Then, DLI treatment using these cryopreserved cells can be promptly performed at the time of relapse without a need for a new harvest. From the perspective of donor convenience and cost-effectiveness, this strategy constitutes an attractive option for patients with dismal prognosis after post-transplantation relapse.

Well-designed prospective clinical trials are required to answer such DLI-related questions as to when, how, and to whom. Previous studies have shown multiple biological effects of G-CSF on peripheral blood stem cells, including the ability to polarize T cells from Th1 to Th2, promotion of regulatory T cells, and tolerogenic dendritic cell differentiation25,26. In addition, this study indicated that G-CSF-primed DLI, rather than unstimulated DLI, included more CD34+ cells and led to early recovery. Moreover, interestingly, low mortality was associated with DLI-induced GVHD, and most of the mortality resulted from disease relapse or refractory disease rather than GVHD.

According to a study from Japan, in the case of nonprimed DLI27, complete remission (CR) rate was 38% and the probability of remaining in CR at 3 years was 7% in AML. Acute GVHD (grade 2 or higher) developed in 31 out of 89 (35%) patients with HLA-identical related donors and was fatal for seven (8%). The incidence of aGVHD (cumulative incidence of aGVHD; 40%) was similar to that in the current report. Chronic GVHD developed in 24 of 73 (33%) patients who received DLI from HLA-identical relatives.

Recently, Claiborne et al.28 reported that treatment of relapsed AML/MDS (n=28) after allo-HCT with acombination of azacytidine and DLI resulted in a two-year OS rate of 35%, and noted a trend towards higher absolute CD4+ cell count in the patient group achieving remission. Hypomethylating agents may induce synergistic effect by promoting cytotoxic effects against leukemic cells when combined with DLI28. Schroeder et al. also reported complete and partial remission rates of 27% and 6%, respectively, which correspond to an overall response rate of 33%, following the treatment of relapsed AML/ MDS after allo-HCT with a combination of azacytidine and DLI. Two-year OS rate was higher in MDS patients and correlated with disease burden in patients with AML. Overall incidence of aGVHD after treatment with Aza and DLI was 23% among all patients included in the study (n=154) and 31% among patients who had received DLI (n=105). The authors concluded that the combination of azacytidine and DLI was an effective and well-tolerated treatment option for patients with relapse after allo-HCT, in particular for those with MDS or AML with low disease burden29. Another group, which tested a combination of decitabine and DLI, reported that the effectiveness of this regimen was not restricted to patients with low leukemic burden30.

In conclusion, our results indicate that G-CSF-primed DLI treatment after allo-HCT with a limited CD34+ cell dose (lower than 6×106 cells/kg) is a feasible and effective option in terms of GRFS, donor convenience, and cost. Therefore, it has potential to replace the second HCT in treatment of late relapse patients.

As the first author, Y. J. L. collected and interpreted the data, drafted the article, and critically revised the important intellectual content; Y. J. L., D. W. B., H. J. J., J. H. M. and S. K. S. performed the treatment, supplied the acquisition of data, and revised the manuscript; S. K. S. provided the conception and design of the study, critically revised the article for important intellectual content, and gave the final approval of the version to be submitted.

The authors declar no conflict of interest. Disclosure forms provided by the authors are available here.

This research was supported by Kyungpook National University Research Fund, 2018-2020.