4Department of Hematology/Oncology,Research Hospital, The Institute of Medical Science, The University of Tokyo, Tokyo, Japan

Adult T-cell leukemia-lymphoma (ATL) is a rare type of mature T cell lymphoma caused by human T-lymphotropic virus type 1 (HTLV-1) with dismal outcome with conventional chemotherapy. A humanized anti-CC chemokine receptor 4 (CCR4) monoclonal antibody, mogamulizumab (MOG), has been shown to be effective for CCR4-positive ATL. However, MOG administration before allogeneic hematopoietic stem cell transplantation (allo-HSCT) was reported to be associated with an increased risk of severe acute graft-versus-host disease (aGVHD) after allo-HSCT due to reduction of donor-derived regulatory T cells (Tregs). We herein present a patient with ATL who underwent allo-HSCT after MOG administration without developing severe GVHD while referring to serum MOG concentration. The clinical course of our case suggests that it might be possible to determine the appropriate timing of allo-HSCT with monitoring of residual MOG level while avoiding the detrimental effect of MOG on post-transplant clinical outcome without increasing the risk of relapse/progression.

Here, we present a patient with ATL who underwent allo-HSCT after MOG administration. We monitored the patient's MOG levels while deciding the timing of allo- HSCT.

A 50-year-old Japanese woman, who had been an asymptomatic HTLV-1 carrier for approximately 14 years, presented with ATL progression. The Eastern Cooperative Oncology Group (ECOG) performance status upon admission was 0. The patient's laboratory results were as follows: white blood cell count, 9.9× 109/L with 19.5% lymphocytes and 36% abnormal lymphocytes; serum lactate dehydrogenase, 343 IU/L (normal range 124-222 IU/L) ; soluble interleukin-2 receptor, 1,356 IU/mL (normal range 122-496 IU/mL). Skin rash and papules were observed on her femora and abdomen, which were pathologically diagnosed as ATL. She was diagnosed with unfavorable chronic-type ATL according to the Shimoyama criteria8.

Using the HTLV-1 analysis system comprising flow cytometry (HAS-Flow) to analyze cells in the peripheral blood (PB), typical ATL cells with CCR4 expression were detected9 (Figure 1A). The patient's clinical course is shown in Figure 2A and 2B. 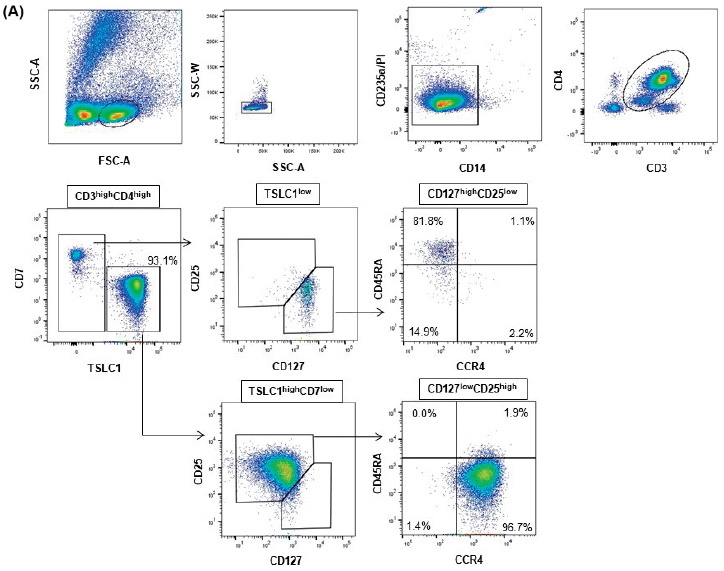 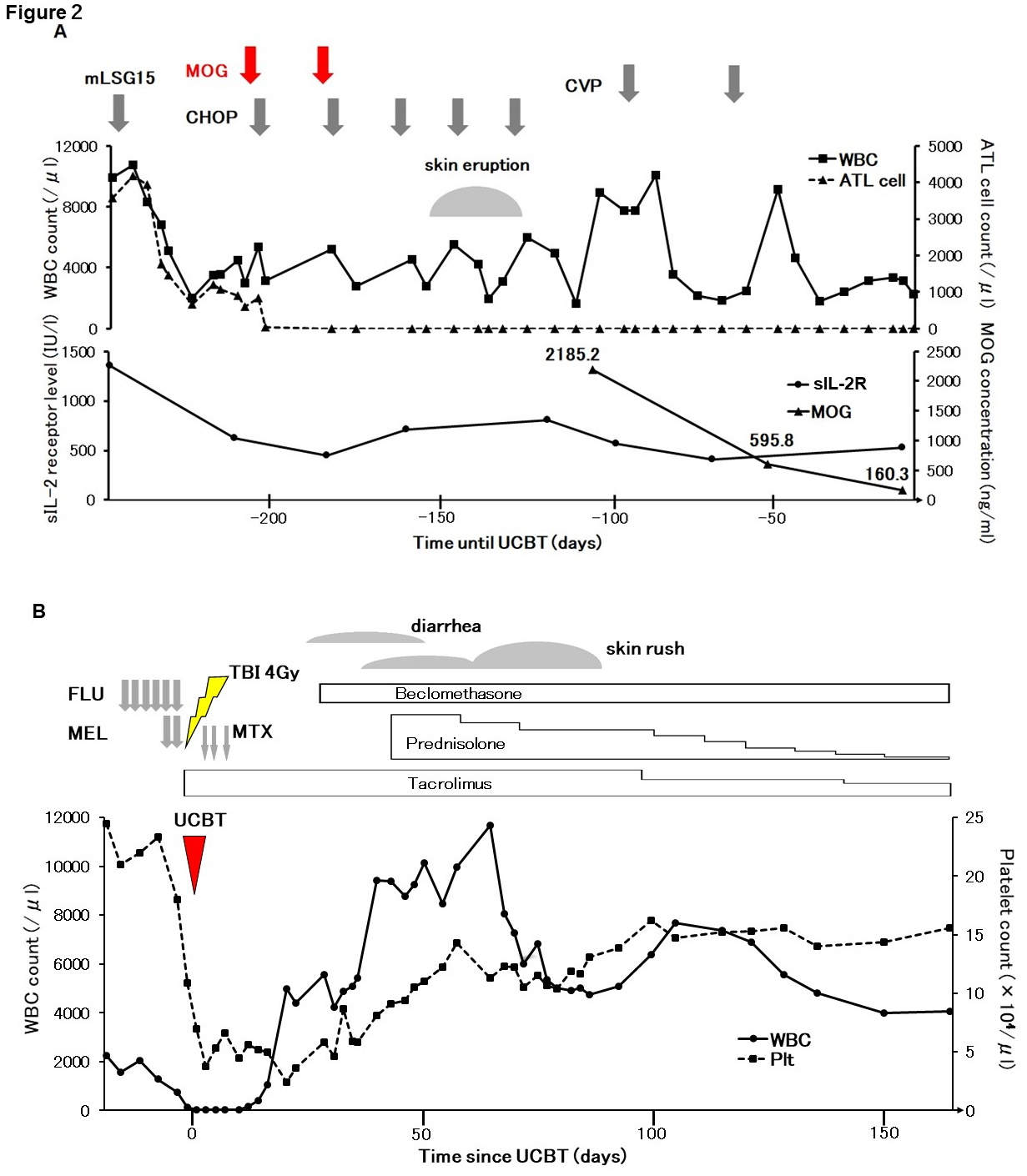 The patient received mLSG15 regimen1,2. After one cycle, the population of ATL cells remained same in the PB. As the number of ATL cells increased with neutrophil recovery, ATL was expected to progress. Additionally, grade 3 fatigue and other complications, such as mucositis and nausea with grade 2 or less, were observed (Common Terminology Criteria for Adverse Events[CTCAE] v5.0). Since the patient was reluctant to continue conventional chemotherapy, we offered an alternative regimen, i. e., MOG combined with the cyclophosphamide, doxorubicin, vincristine, prednisolone (CHOP) regimen. This regimen caused the ATL cells to disappear immediately.

After two doses of MOG, her general condition improved. Subsequently, MOG administration was terminated considering the risk of developing GVHD after allo-HSCT. The proportion of effector-type Tregs at 41 days after the final MOG dose was low (Figure 1B).

Figure 1B. Flow cytometric analysis of PB on 41 days after the last MOG administration
In normal CD4 positive T cells, which were positive for CD7 and negative for TSLC-1, only 1.9% were effector-type Tregs(FOXP3high CD45RAlow CD4-positive cells).

The patient achieved neutrophil engraftment with complete donor chimerism. HAS-flow analysis of PB at 35 days after UCBT showed that ATL cells were undetectable. The proportion of Tregs (CD25highCD27low fraction) among the total population of CD4+ cells was 7.2%, and comprised 32.0% of CCR4+ cells (Figure 1C). She developed diarrhea at 21 days after UCBT, which was diagnosed as aGVHD (overall gradeⅡ, gut stage 1), and she received oral beclomethasone dipropionate alone for treatment. Subsequently, she developed skin aGVHD (overall gradeⅠ, skin stage 2) at 32 days after UCBT, which was managed by topical steroid treatment. However, once the skin rash worsened (, overall gradeⅡ, skin stage 3), prednisolone (0.5 mg/kg/day) was additionally administered and the skin GVHD subsequently resolved. Approximately 6 months after UCBT, the HTLV-1 proviral load in ATL cells from the PB was undetectable. Consequently, we stopped all immunosuppressant treatments. 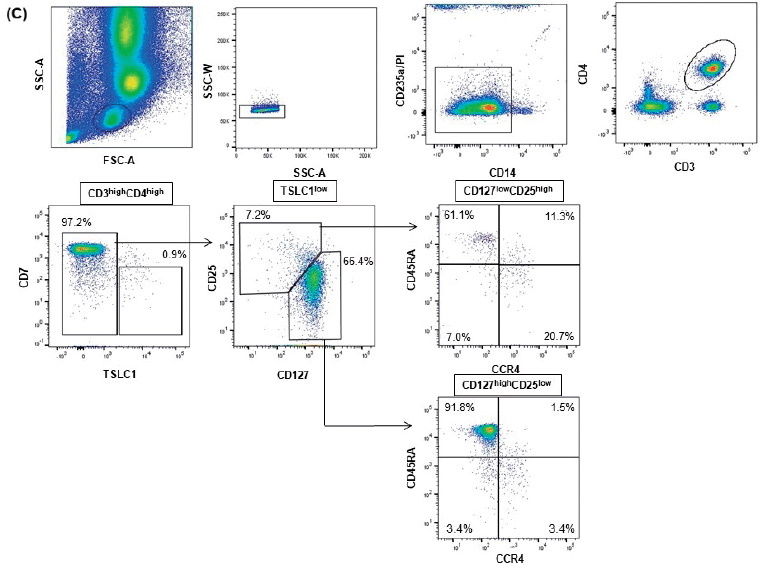 Figure 1C. Flow cytometric analysis of PB on 35 days after UCBT
ATL cells were undetectable, while the proportion of Tregs (CD25highCD27low CD4-positive cells) in normal CD4 positive cells was 7.2% with 32.0% of CCR4-positive cells.

The use of MOG in transplant-eligible patients considering the increased risk of severe aGVHD after allo- HSCT is controversial7. However, insufficient disease control before allo-HSCT is a poor prognostic factor later7. Thus, whether MOG should be used to improve chemotherapy or if it is better to directly proceed to allo- HSCT in chemo-refractory ATL remains controversial. A factor in the decision to administer MOG is the disease site of ATL, since MOG is highly effective in the PB.

Another important issue that occurs when a patient receives MOG before allo-HSCT is the timing of allo- HSCT after MOG. A previous large retrospective study showed that patients that began allo-HSCT>50 days after MOG treatment had significantly worse outcomes7. However, presently, the concentration of MOG was 2,185.2 ng/mL, 76 days after the last dose of MOG. Although the half-life of MOG is reportedly~16-18 days10, we calculated the half-life of MOG to be approximately 27 days. Our data suggest the importance of monitoring the level of MOG before allo-HSCT to prevent severe aGVHD.

As a limitation, we must emphasize that this study is just a case report, and further clinical trials are needed to confirm the effectiveness of this treatment strategy. Another important limitation is that no established threshold exists to avoid the risk of severe aGVHD. We expect that the minimal dose of MOG is less than 300 ng/mL, since CR was achieved in Cohort 1 of the phase Ⅰ trial (dose level 0.01 mg/kg) for ATL with a Cmax of~ 300 ng/mL. Thus, one possibility is to use a cut-off dose of 300 ng/mL, which should be prospectively assessed in the future.

In conclusion, we reported a successful case of CBT without severe aGVHD for chemo-refractory ATL after combination chemotherapy and MOG. Monitoring the PB concentration of MOG is important to avoid the risk of severe aGVHD, and this should be explored in future studies.