By evaluating risks of late mortality and causes of death among long-term survivors after autologous hematopoietic stem cell transplantation (HSCT) in Japan, we clarified what we should focus on during follow-up to reduce them. The study cohort included 6,780 patients who had survived for≥2 years after the first autologous HSCT performed from 1974 to 2012 for hematological diseases. With a median follow-up of 6.0 years among survivors, overall survival probabilities at 5 and 10 years after HSCT were 92% and 83%, respectively. Eight hundred thirty deaths occurred: 451, recurrent primary diseases; 87, subsequent solid cancers; 57, subsequent hematological malignancies; 55, infections; 41, respiratory diseases; 19, cardiovascular diseases; 15, liver diseases; 10, neurological diseases; and 7, kidney/genitourinary diseases (Except small numbers of other causes and missing). According to the log-rank test, the risk of overall mortality was remarkably increased among HSCT recipients compared with the that in the general Japanese population (observed/expected ratio[O/E]=5.4; 95% confidence interval[CI], 5.0-5.8). The risks of cause-specific mortality increased with infection (O/E=6.8; 95% CI, 5.1-8.8), subsequent solid cancers (O/E=1.4; 95% CI, 1.1-1.7), subsequent hematological malignancies (O/E=14.3; 95% CI, 10.8-18.5), kidney/genitourinary diseases (O/E=3.4; 95% CI, 1.4-7.1), respiratory disease (O/E=9.0; 95% CI, 6.5-1.2), and liver diseases (O/E=2.6; 95% CI, 1.4-4.2). Long-term survivors after autologous HSCT are at an increased risk of death due to secondary cancers, infections, and any organ diseases as well as recurrence compared to the general population. When monitoring these patients in the outpatient clinic, it is important for physicians to predict a change in the patient's condition and to start treatment earlier.

The number of autologous hematopoietic stem cell transplantation (HSCT) is continuously increasing1, and the proportion of long-term survivors after HSCT is expected to increase with the advancement of transplantation and other medical techniques. The risk of developing diseases after autologous HSCT is high in survivors compared to that in the general population owing to damage caused to body organs by consumption of numerous drugs for conditioning chemotherapy and prevention and treatment of complications, primary diseases, which necessitated HSCT, and HSCT itself, although patients with malignant diseases do not experience recurrence. In this study, we evaluated the risks of late mortality and causes of death among long-term survivors after autologous HSCT in Japan and identified important guidelines for predicting and reducing the occurrence of late complications in the out-patient clinic.

The patient clinical data were collected by the Japan Society for Hematopoietic Cell Transplantation (JSHCT) /Japanese Data Center for Hematopoietic Cell Transplantation (JDCHCT) using the Transplant Registry Unified Management Program (TRUMP) 2,3. The study cohort included 6,780 patients characterized by progression- free survival for≥2 years after the first autologous HSCT, performed from 1974 to 2012 for hematological diseases. This study was approved by the data management committees of the JSHCT and by the institutional review board of the Ethical Committee of Aichi Medical University. JSHCT/JDCHCT observational research protocol requires written informed consents from patients for use of their data for research purposes. Opt-out was permitted, in accordance with the Ethical Guidelines, for patients who received HSCT before May 2017, and those who declined permission for participation in research were not included in the study.

Classification of causes of death

The standard mortality ratio (SMR) was calculated by dividing the number of deaths among patients with HSCT (observed number) by the number of expected deaths in the age-, sex-, and year-matched general population (expected number). The mortality rates in the general population were obtained from the database of the Health, Labour and Welfare Statistics Association in Japan. The 95% confidence intervals (CIs) for the SMR were calculated based on the assumption that the observed numbers of deaths followed a Poisson distribution. Overall survival was estimated from HSCT to death by any cause using the Kaplan-Meier method. The logrank test was used to draw comparisons between the groups. A two-sided P-value<0.05 was considered statistically significant. Data were analyzed using STATA, version 10 statistical software (STATA Corp., College Station, TX, USA).

Patient characteristics are summarized in Table 1. Patients'median age at HSCT was 49 years (range, 0-78 years), and 70% of them were≥40 years of age. Ninetyfive percent of the transplant sources were peripheral blood (PB) including a very small number of bone marrow plus PB. As for the patients'diseases, except for the small number of non-malignant diseases (n=213), most were hematological malignancies such as non-Hodgkin lymphoma (NHL) (n=4,191), multiple myeloma (MM) /plasma cell disorder (n=805), acute myeloid leukemia (AML) (n=795), Hodgkin lymphoma (HL) (n=422), and acute lymphoblastic leukemia (ALL) (n=354).

Table 1. Characteristics of the disease-free survivors who survived more than two years after autologous transplantation 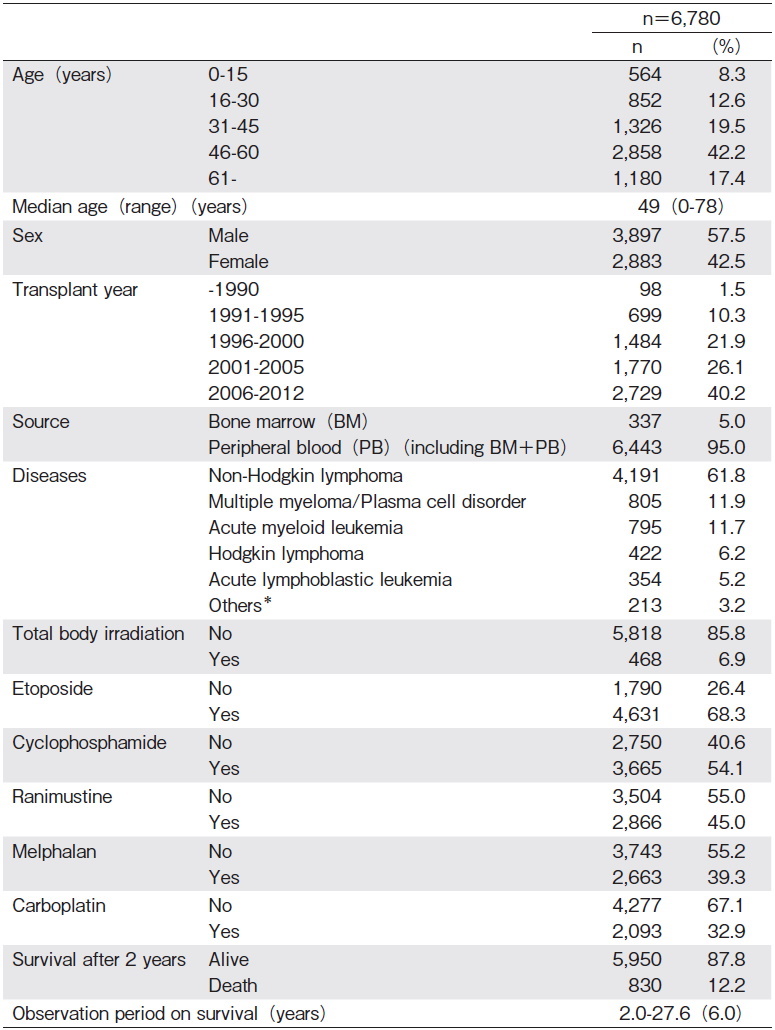 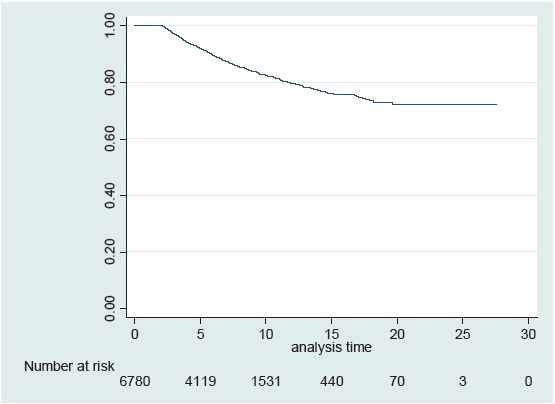 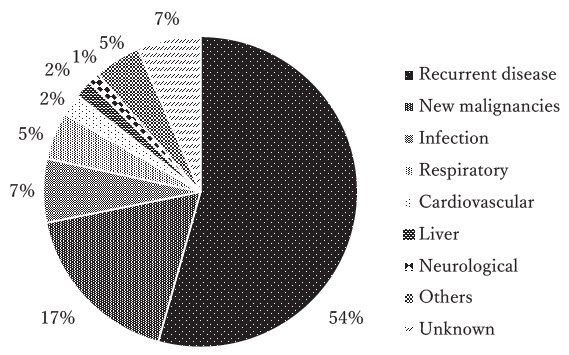 Figure 2. Frequency of causes of death
Other causes of death include kidney and genitourinary diseases, external(accidental)injuries, endocrine/diabetes, digestive tract disorders, suicide, bleeding, sudden death, and multiorgan failure.
Table 2. Standard mortality ratios(observed/expected ratio)for each cause of death among the patients who survived more than two years after transplantation 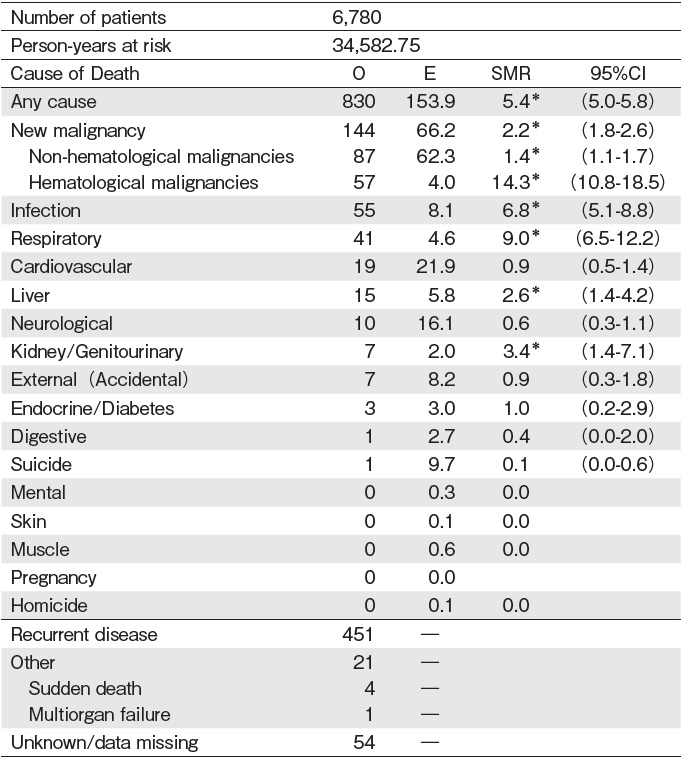 New malignancies, especially hematological malignancies, were the most frequent cause of mortality, excluding recurrence, after autologous HSCT. Reported by Pedersen-Bjergaard et al and Miller et al6,7, high-risk incidents of therapy-related AML/MDS (t-AML/MDS) are well known. They proposed that accumulative alkylating agents used in the preconditioning regimen are one of the biggest risk factors for this clinical condition. We found that many patients were exposed to alkylating agents, such as cyclophosphamide, ranimustine (MCNU), melphalan, and carboplatin, as preconditioning agents in this cohort, and this finding supports that of the previous reports. Use of alternative agents for the conditioning regimen might reduce the risk of t-AML/MDS. However, purine analogs, such as fludarabine, stand out as the risk factor of secondary hematological malignancy after HSCT8,9. Although we had a small number of patients who received purine analogs in this cohort, it is necessary for us to consider not only the alkylating agents but also the risk of secondary hematological malignancies in long-term survivors who received purine analogues.

Older age is one of the risk factors that affects the development of t-AML/MDS after autologous transplantation8,10,11. The fact that more than 60% of the patients in this cohort were 46 years or older supports this finding. As the number of patients with autologous HSCT in Japan has increased in recent years, especially in elderly patients older than 60 years of age12, more cautious posttransplant follow-up including close monitoring of complete blood cell count changes will be needed for early detection of t-AML/MDS not only in this age group but also for all patients with other identified risk factors8,10.

In this analysis, respiratory disease was the third leading cause of death after recurrence and secondary malignancy. Many patients in this category died of idiopathic interstitial pneumonia or respiratory failure (data not shown). Similar to the case with t-AML/MDS, antineoplastic agents often cause pulmonary disorders. Cyclophosphamide, which is commonly administered in autologous HSCT is one of the most common precipitating drugs for interstitial lung diseases13. Although there are many reports on pulmonary toxicity caused by carmustine (BCNU) used for high-dose chemotherapy and autologous HSCT13-15 an MCNU-containing regimen is often used for preconditioning of autologous HSCT in Japan, and its pulmonary toxicity is well known16,17. On the other hand, every drug other than chemotherapeutic agents, such as antibiotics or nonsteroidal anti-inflammatory drugs, which are commonly used to treat complications after HSCT, might cause pulmonary diseases18-20. Symptoms of respiratory diseases, such as cough, sputum, and shortness of breath, are relatively easy for patients to understand, and immediate examination of arterial blood gas analysis and chest radiography as well as chest computed tomography for patients reporting such symptoms is important. Early detection of respiratory diseases and their treatment can be expected to reduce the risk of death.

Among infections after autologous HSCT, except for bacterial and fungal infections, which are carefully monitored, the risk of viral infection associated with immune reconstitution after HSCT is widely recognized21. Reusser et al suggested the significance of a consecutive measurement of the titer of cytomegalovirus antigen22, and Schuchter et al pointed out that patients with HL and NHL are at a high risk of varicella-zoster virus infection after autologous HSCT23. The viral antigen titer can detect abnormalities before the development of symptoms, making it possible to initiate earlier administration of antiviral agents, such as acyclovir or foscarnet, and reduce mortality from viral infection.

Recurrence of HL, NHL, and MM is the most commonly- encountered conditions among long-term survivors after autologous HSCT, and various methods are suggested to predict recurrence. Hill et al24 reported that the risk for recurrence in patients with diffuse large B-cell lymphoma with an advanced stage at HSCT was higher than that in complete remission. Sirohi et al proposed the use of the Hasenclever index, which was designed as a prognostic score for patients with HL25 to predict the risk for recurrence after autologous HSCT26. Smeltzer et al suggested that by using fluorodeoxyglucose-positron emission tomography (PET) as a relapse risk assessment tool of HL, earlier salvage chemotherapy for PET-positive patients after HSCT will improve the outcome27.

Along with prediction of the risk for recurrence, new prophylactic treatment against recurrence after autologous HSCT has been recommended. Moskowitz et al reported that they could reduce the risk for recurrence by administrating brentuximab vedotin as a consolidation therapy to patients with refractory HL after autologous HSCT28. In addition to planned tandem HSCT, which has shown a high degree of availability for patients with MM since the 2000s, we found many reports regarding the benefits of administrating new agents, such as thalidomide and lenalidomide, as maintenance therapy after HSCT in MM to prolong survival29,30.

In conclusion, patients after autologous HSCT can expect long-term survival, but the number of patients who develop late complications will increase. When patients are followed up with after autologous HSCT in outpatient clinics, it is necessary for physicians to predict late complications and to perform appropriate testing and therapeutic interventions without delay. If a long-term survivor lives far from the transplant facility, immediate consultation might be difficult; educating the transplant patients regarding the risk of late-onset complications and the importance of immediate consultation should also be emphasized by the physicians.

This work was supported in part by the Practical Research Project for Allergic Diseases and Immunology (Research Technology of Medical Transplantation) from Japan Agency for Medical Research and Development, AMED under Grant Number 19ek0510023h0002.

MI, HN, TY, MI, YI, YI, and YA contributed to the design of the study. HU, YK, TM, SY, SS, TM, MS, YS, and TF participated in data collection. TI and MI were responsible for data management. MI and YA analyzed the results and wrote the paper.