Sri Lanka is a developing country with a population of 21 million. Nation Cancer Institute (NCI) is the largest tertiary cancer centre with universal health coverage. Absence of hematopoietic stem cell transplant (HSCT) was a major deficiency as most patients cannot afford transplant abroad. In 2013-14, NCI decided to establish the first National HSCT center in collaboration with St. Vincentʼs Hospital Sydney. Eventually, the first Autologous HSCT was established at NCI in December 2016.

Patients with multiple myeloma (MM) in very good partial remission or better remission, and patients with relapsed Non-Hodgkinʼs lymphoma (NHL) and Hodgkin lymphoma (HL), who were less than 65 years with good performance status were selected. Stem cells were mobilized with cyclophosphamide and G-CSF and the products were cryopreserved. Melphalan was the conditioning regime for MM while BEAM was used for HL and NHL.

Median engraftment day was 13 (range: 11-19) and median hospitalization was 16 days (range: 14-20). All developed febrile neutropenia and GradeⅢ thrombocytopenia. Zero transplant-related mortality was observed with acceptable morbidity. At the median follow-up of 47 weeks, the overall survival was 100% with all the patients still in remission.

Sri Lanka, an island in the Indian Ocean with an area of 62,705 km2 has a population of 21 million. It is a developing country in Southeast Asia. It is divided into 9 provinces, 25 districts and 324 divisional secretariats (Figure 1). In Sri Lanka, the public sector provides free universal health coverage. The Department of Health and the provincial health sector covers the whole range of curative and preventive services. Life expectancy at birth is 72 years for males and 78 years for females (2016). Total expenditure on health per capita is $369 (3.5% of GDP). Doctor-population ratio is 1.04 per 1,000 population (70% are employed in the public sector)1. 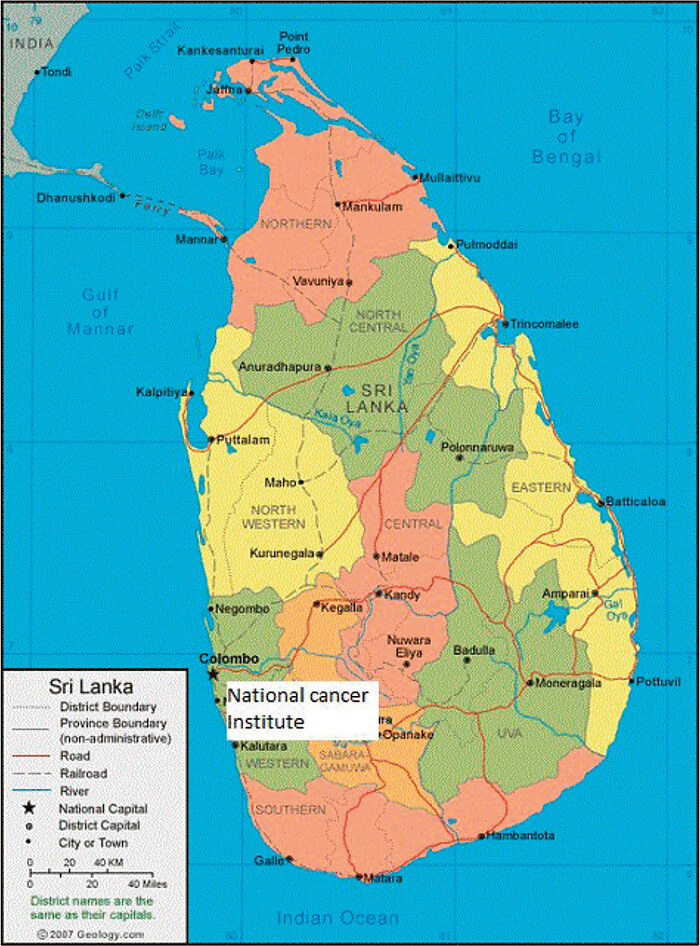 National Cancer Institute (NCI) is the only cancer hospital of Sri Lanka, established in 1958, under the government health services. The institution is situated in greater Colombo area and provides cancer treatment to the population in greater Colombo area as well as to the patients referred by all other peripheral oncology units in the country. About 13,000 new cancer patients are registered at NCI annually. It has been recognized as a princi- pal curative centre, postgraduate training unit and research institution in the field of oncology. About 1,100 new hematological malignancies are diagnosed in Sri Lanka each year, of which 25% are plasma cell disorders. Majority (70%) of hematological malignancies diagnosed in Sri Lanka are treated at NCI2.

Absence of National Hematopoietic Stem Cell Transplant (HSCT) program in Sri Lanka was a major deficiency as most patients cannot afford transplant abroad. In 2013-14, clinicians at NCI decided to establish the first National HSCT center in collaboration with National Blood Transfusion Service (NBTS). This was enthusiastically supported by the government, local and expat sponsors. Collaboration between NCI and St Vincent’s Hospital Sydney (SVHS), Australia followed by infrastructure development, mentorship, training and setup of protocols resulted in the first Autologous HSCT (AHSCT) in December 2016.

We describe the establishment of the first National HSCT center at NCI of Sri Lanka and the impressive results it achieved after the first 12 months.

A team of 16 members consisting of clinicians, pathologists, nurses, scientists and pharmacists were trained at SVHS, Australia. This was followed by regular internetbased mentoring, establishing protocols, and on-site training by voluntary SVHS staff.

Multiple myeloma (MM) patients in complete remission (CR), very good partial remission (VGPR) or partial remission (PR) and patients with relapsed Non- Hodgkin’s lymphoma (NHL) and Hodgkin lymphoma (HL), who were less than 65 years with good performance status were eligible for the HSCT at the newly established unit of NCI.

Hematopoietic stem cells (HSC) were mobilized with cyclophosphamide and G-CSF in patients with MM. The mobilization regimen consisted of intravenous cyclophosphamide (2 g/m2) on day 1 followed by subcutaneous filgrastim 10μg/kg for eight consecutive days3. Apheretic stem cell collection was scheduled on next day. In HL and NHL patients, stem cells were collected after the last salvage chemotherapy regimen prior to transplant.

HSC products were cryopreserved, and post-thawed samples were checked for viability and contamination before product infusion.

Melphalan was used as the conditioning regime for MM patients while BEAM regimen (carmustine, etoposide, cytarabine and melphalan) was used for the patients with HL and NHL4-8. Patients were kept under intensive monitoring peri-transplant. Immediate commencements of antibiotics, fluid management, blood component transfusions were instigated according to the protocols. Engrafted patients were discharged and managed regularly at the transplant clinic.

Twenty autologous transplants were performed in the first year. Majority (70%, n=14) of patients were between 40 to 60 years (Figure 2). The mean age was 47 years (range: 17-62) and male to female ratio was 3:2. There were 17 MM patients and one each of NHL (diffuse large B-cell lymphoma sub-type), HL and POEMS syndrome patients. All the patients were in ECOG performance status 0 at the time of transplant. 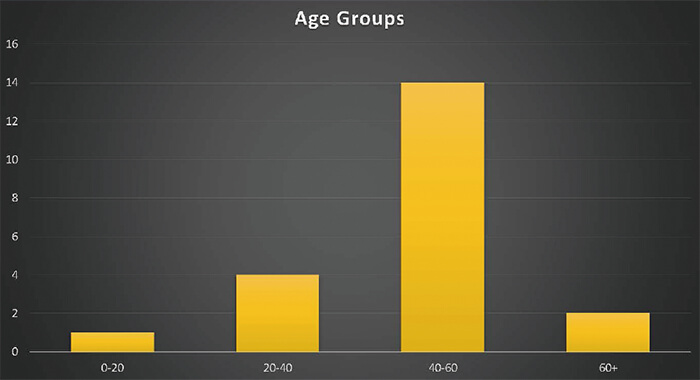 Eighty two percent (n=14) of multiple myeloma patients have had induction triplet chemotherapy with bortezomib, thalidomide and dexamethasone (VTD), while the HL and the NHL patients had received ABVD and R-CHOP chemotherapy regimens, respectively. Both HL and NHL patients were given ESHAP (etoposide, methylprednisolone, cytarabine, cisplatin) chemotherapy regimen for their relapsed disease and both of them were in complete remission at the time of transplant. Sixty five percent (n=11) of MM patients were in VGPR or better remission at the time of transplant.

The median engraftment day was 13 (range: 11-19) and the median hospitalization was 16 days (range: 14-20). All developed febrile neutropenia and seven patients showed positive blood cultures, out of which six showed growth of Gram-negative organisms. The most common pathogen isolated belonged to Pseudomonas species. The empirical broad-spectrum antibiotic combination used in febrile neutropenia was piperacillin-tazobactam and amikacin. All patients were routinely administered with intravenous immunoglobulin on day 6 posttransplant. 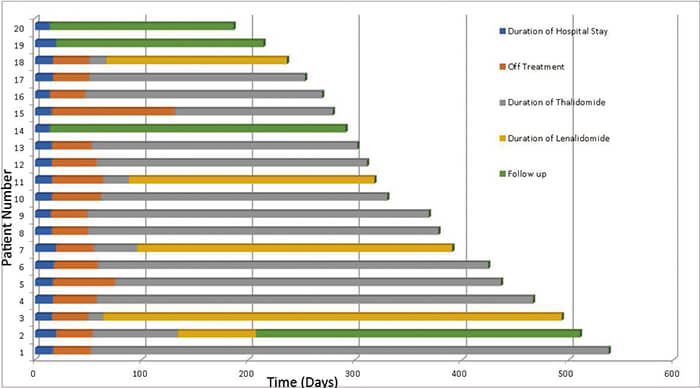 After two and half years of initial planning of the HSCT centre at NCI, Sri Lanka, 20 transplants were performed during the first year of operation with an overall survival of 100%.

This encouraging transplant outcome was attributed to commitment by trained multi-disciplinary team complemented by partnership with an experienced and dedicated voluntary mentoring team, meticulous planning, adequate equipment and infrastructure, support from the government, local and expatriate philanthropists (Figure 4). 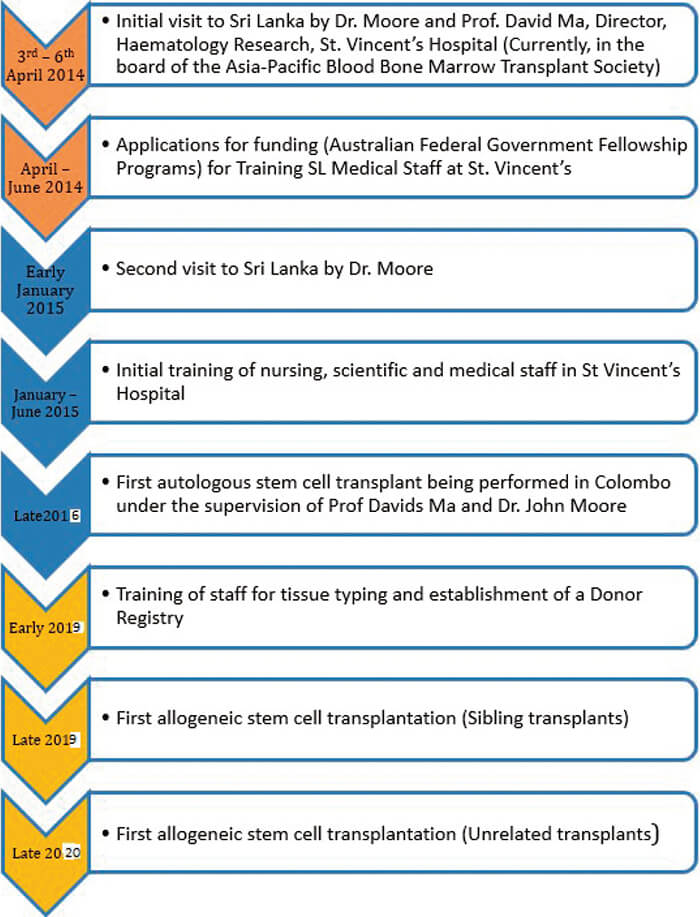 We plan to initiate allogeneic stem cell transplant program at NCI and to assist the establishment of other HSCT centers in the country.

1. Support from The President of Sri Lanka, senior officials of Ministry of Health and Directors of NCI and NBTS

4. Jude Fernando, Chryshanthi Fernando and the members of the Australian Sri Lanka Society