Various factors were reported to be associated with primary graft failure, which included stem cell source (cord blood [CB] compared to bone marrow [BM]) or peripheral blood stem cells [PBSCs]), disease status at transplant, degree of human leukocyte antigen (HLA) disparity, presence of donor-specific antibodies (DSA), history of blood transfusion, cell numbers of transplanted grafts, and intensity of conditioning regimen1,7-12. However, all these factors are related to pre-transplant characteristics. There is scarce evidence regarding post-transplant factors that can predict the subsequent risk of primary graft failure13,14. In patients without autologous hematopoietic recovery, prompt diagnosis of primary graft failure and subsequent salvage SCT are crucial, because a longer period of neutropenia increases the risk of severe infection. Therefore, an efficient strategy to diagnose or identify patients at high risk of primary graft failure as soon as possible after allo-SCT should be established.

In the present study, to clarify the risk factors of primary graft failure, we assessed patients who did not have white blood cell (WBC) recovery on consecutive days after allo-SCT and estimated the probability of subsequent engraftment and mortality without engraftment and re-transplantation.

A total of 1,367 allo-SCTs were conducted at the National Cancer Center Hospital between December 1996 and September 2015. Except 12 patients who had missing data of WBC count from day 0 to day 28, 1,355 patients were included in further analyses. This study was approved by the Institutional review board of the National Cancer Center and was conducted in accordance with the guidelines given in the Declaration of Helsinki.

On each day after day 5 following SCT, patients with WBCs<100 cells/μL (i.e., count below the detection limit at our Institute) were evaluated. The study endpoints included neutrophil engraftment, mortality without engraftment, and retransplantation. Engraftment is defined as an absolute neutrophil count>500 cells/μL for 3 consecutive days after SCT6. A descriptive statistical analysis was performed to assess the patientsʼ characteristics. The patient characteristics were compared using the Chi-squared test for categorical variables, and the Mann-Whitney U test or Kruskal-Wallis test for continuous variables. The cumulative incidences of engraftment, mortality without engraftment and retransplantation were evaluated using the Fine and Gray model. In the Fine and Gray model for engraftment, mortality without engraftment and re-transplantation were defined as competing risks. Factors that were associated with a two-sided p value of less than 0.10 in the univariate analysis were included in a multivariate analysis. The final model was determined by backward stepwise selection. A two-sided p value of less than 0.05 was considered statistically significant.

The variables included in these analyses were as follows: sex (female vs male), sex mismatch (female to male vs. other), patientʼs age at the time of allo-SCT (age≥40 years vs. age<40), Eastern Cooperative Oncology Group performance status (0-1 vs. 2-4)15, intensity of the conditioning regimen (myeloablative vs. reduced-intensity), use of total body irradiation (TBI) (yes vs. no), stem cell source (PBSCs vs. BM vs. CB), relation between donor and patient (related vs. unrelated), HLA disparity in the graft-versus-host and host-versus-graft direction assessed by allelic or serological typing of HLA-A, -B, -C and-DRB1 (8/8 matched vs. others), presence of HLA antibody or donor specific antibody (DSA) (yes vs. no, regardless of titer), use of anti-thymocyte globulin (ATG) (yes vs. no), immunosuppression (calcineurin inhibitor+MTX [methotrexate] vs. calcineurin inhibitor+MMF [mycophenolate mofetil]), disease risk (low risk vs. intermediate risk vs. high risk vs. very high risk defined by Disease Risk Index)16, histories of documented infection until day of analyses after allo- SCT (yes vs. no), histories of documented infection or febrile neutropenia until day of analyses after allo-SCT (yes vs. no), donor chimerism around day 28 (<95% vs. ≥95%). All statistical analyses were performed with EZR ver 1.30 (Saitama Medical Center, Jichi Medical University, Tochigi, Japan)17, which is a graphical user interface for R (The R Foundation for Statistical Computing, version 3.2.2). 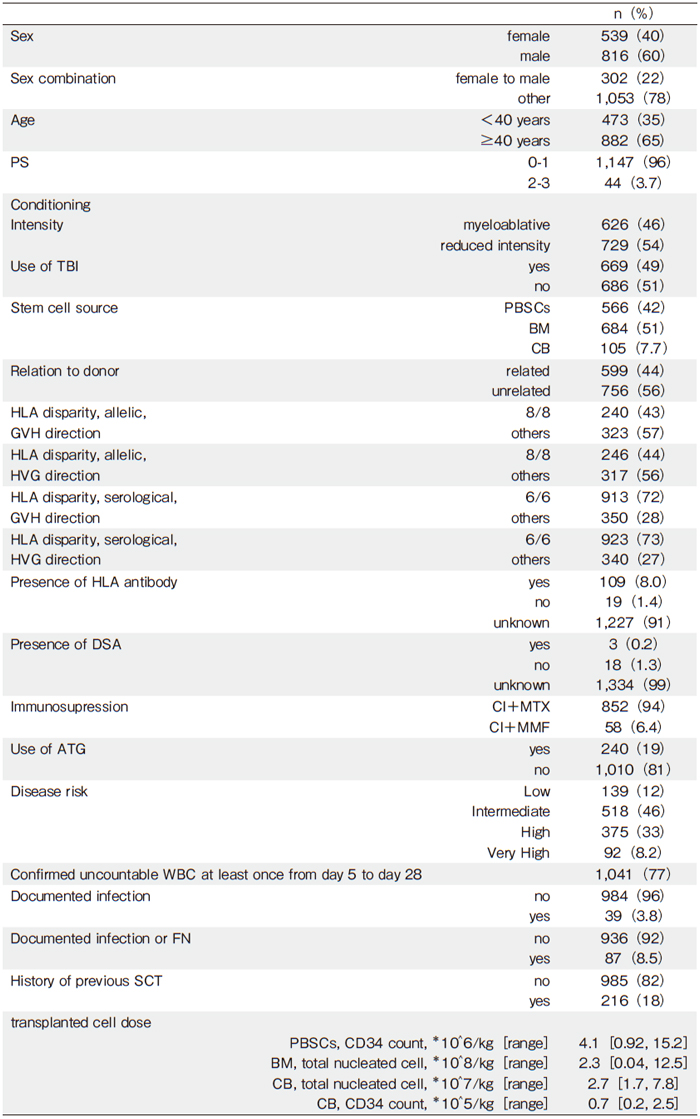 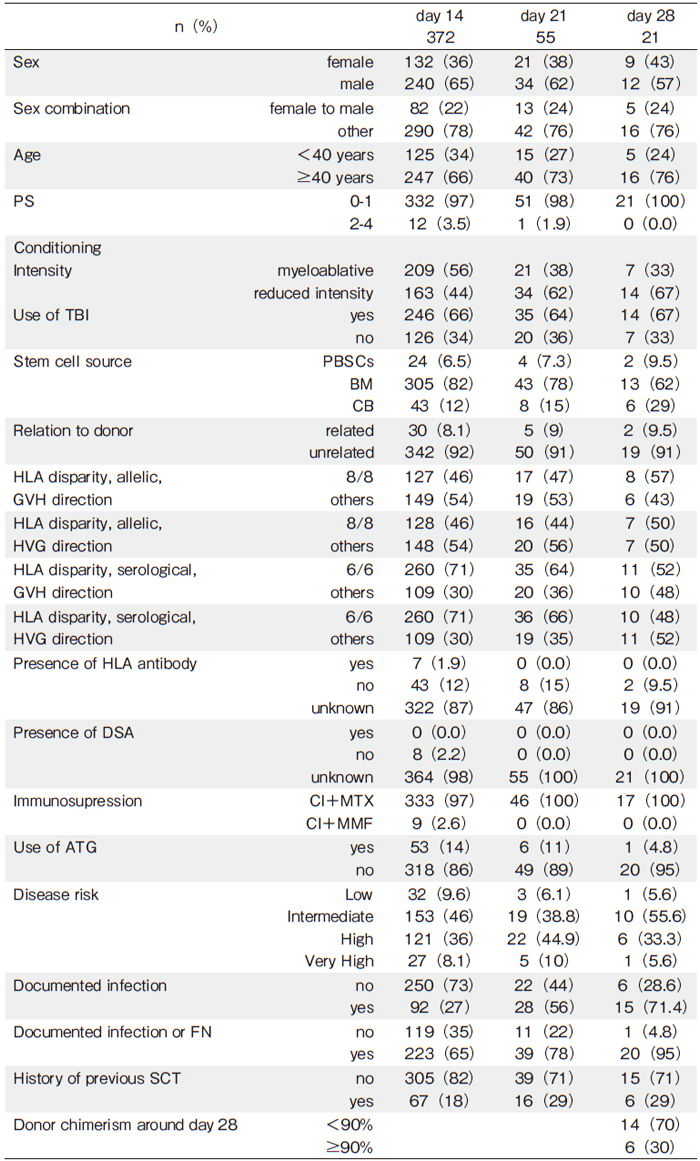 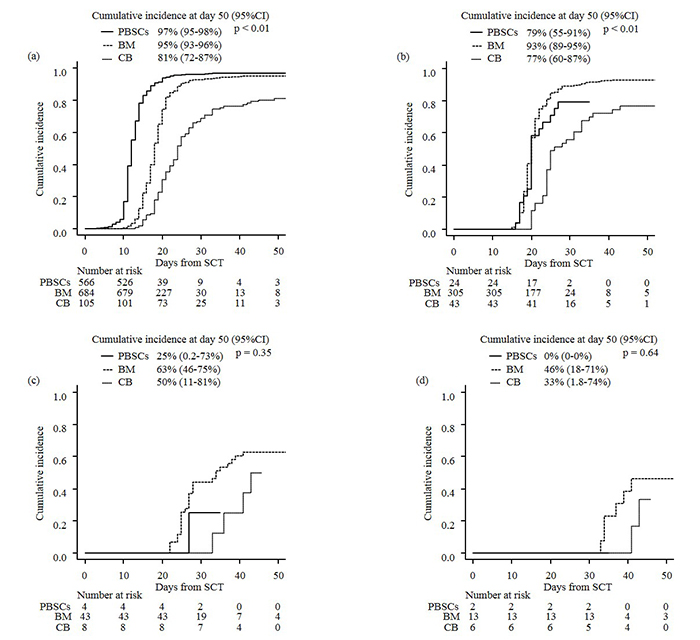 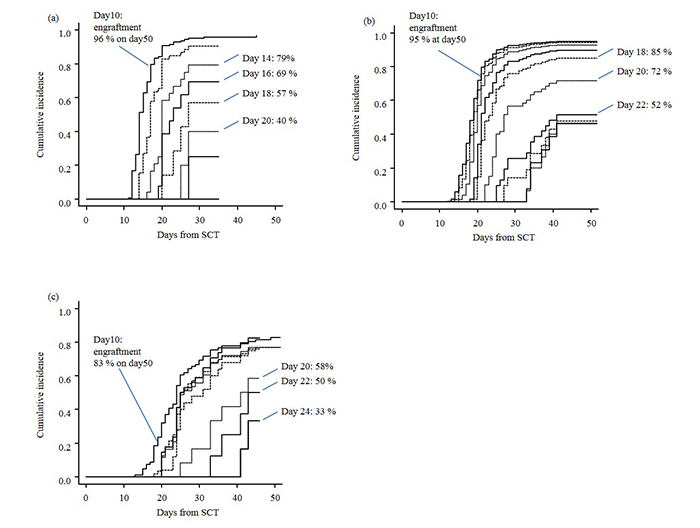 Figure 3. Cumulative incidences of engraftment according to donor chimerism in the patients with WBCs<100 cells/μL at day 28
WBCs, white blood cells.

Table 3. Multivariate analyses of cumulative incidence of engraftment at day 50 in all patients and patients with WBCs<100 cells/μL at day 14

In our study, we retrospectively assessed the cumulative incidences of engraftment, mortality without engraftment, and re-transplantation in recipients of allo-SCT at each day following allo-SCT. Our data, for the first time, showed that dynamic alteration in the expected probability of subsequent engraftment differed clearly among stem cell sources. These data provided us information about the expected probability of subsequent engraftment and the need of retransplantation in patients whose WBCs remained undetectable, which would give us a clue regarding a reasonable timing to assess the engraftment, including chimerism analysis and BM aspiration.

In our analyses, chimerism around day 28 strongly predicted subsequent engraftment. However, our results suggested that patients already face the risk of primary graft failure before day 28, especially in recipients of PBSCs. Therefore, it might be helpful to decide the appropriate timing to assess donor chimerism earlier than day 28, taking both their source of stem cells and WBC counts into account. If the donor chimerism is low, it is desirable to plan a salvage SCT5,6,20. If the complete donor chimerism is confirmed, waiting for the engraftment of WBCs or intervention against poor graft function, such as stem cell boost, immunosuppression therapy, or salvage SCT are considered21-25.

In addition, in patients who received CB, use of MMF apparently changed the kinetics of engraftment. The significantly higher risk of primary graft failure after CB transplant than after allo-SCT using BM or PBSCs is consistent with previous reports18,19. Furthermore, the duration of neutropenic period was longer in recipients of CB in spite of the engraftment being successfully achieved. Thus, it is particularly important to identify patients at high risk of primary graft failure in recipients of CB. The kinetics of engraftment and risk of graft failure after single CB transplantation were previously reported26. In their report, the likelihood of engraftment peaked at day 21 and decreased subsequently. In our analyses, the probability of subsequent engraftment decreased from day 20 as long as WBC remained<100 cells/μL, which was consistent with their report26. Thus, these time points would be practically appropriate to evaluate chimerism and BM aspirate to precisely assess the risk of primary graft failure.

The univariate and multivariate analyses suggested that several clinical factors were predictive of subsequent engraftment in all patients and patients with WBCs<100 cells/μL at specific time points. It is important to differentiate these prognostic factors across different time points and in different conditions. For example, on the one hand, BM was a significant risk factor against engraftment in the analysis for all patients compared with PBSCs. On the other hand, BM was a favorable factor for engraftment in the analysis for patients with WBCs<100 cells/μL at day 14 compared with PBSCs. This clearly means that engraftments and WBC recoveries were generally earlier with PBSCs than with BM and CB. Thus, patients whose WBCs remained<100 cells/μL at day 14 were especially at risk of graft failure.

The limitations of this study should be clarified. First, it is not clear whether patients who died without engraftment could have been successfully rescued if they had received re-transplantation promptly. However, given the dismal outcome in patients with primary graft failure, there might be many patients who could avoid death and attain engraftment if other complications, such as infection and organ failure were successfully controlled. Secondly, the criterion of the WBCs<100 cells/μL was used to define patients with uncountable WBCs in this study. However, this threshold might be higher than that in other institutes. Thus, our findings should be reassessed in other institutes. Thirdly, this study only evaluated whether patients achieved neutrophil engraftment or not, which means that we did not distinguish primary graft failure with no donor chimerism from poor graft function with mixed/complete donor chimerism. Although they should have been theoretically treated using different methods, due to a limited number of patients, it was difficult to compare the effectiveness of methods such as salvage SCT or stem cell boost to rescue such patients. Our study provided information for appropriate timing to evaluate the probability of subsequent engraftment. Fourthly, the data of donor chimerism were available only around day 28. We need more data to assess whether data of donor chimerism around day 14 or 21 were more advantageous or not. To determine the best treatment option for patients at high risk of primary graft failure, larger studies are needed to compare the effectiveness among the treatment options.

In conclusion, although the probabilities of engraftment decreased if WBCs remained undetectable long time, the dynamic alterations varied significantly according to stem cell sources. In addition to pre-transplant risk factors, post-transplant WBC kinetics would help us to estimate the risk of primary graft failure, which in turn might be useful to diagnose primary graft failure at an appropriate timing, to promptly schedule patients with primary graft failure for a second transplantation.

This work was supported by grants from the National Cancer Research and Development Fund (26-A-26) and the Advanced Clinical Research Organization.

A. K. and S. F. designed this study and analyzed the data; all authors wrote the manuscript.