TOP
Home > Articles > Volume 5 (2022) > Issue 4 > Trends in disease indications for hematopoietic stem cell transplantation in the Asia-Pacific region: A report of the Activity Survey 2017 from APBMT

Hematopoietic stem cell transplantation (HSCT) has become an established therapy that is being actively performed worldwide as a potentially curative option for malignant and non-malignant hematological diseases, solid tumors, and other non-malignant non-hematological diseases1–5. Based on the reports from hematopoietic stem cell transplant registries, donor choices, stem cell sources, and transplant indications vary significantly among countries and regions6–11. The Asia-Pacific Blood and Marrow Transplantation Group (APBMT) conducted its first activity survey in 2007 to investigate the number of transplants in the Asia-Pacific (AP) region, and the survey has continued for 15 years12–14. As opposed to a single year cross-sectional survey, a continued survey could reveal changes in the trends of transplants in this region. Moreover, the survey shows the differences in the trends of transplants between this region and the rest of the world. Focusing on the disease indications for HSCT, including acute myeloid leukemia (AML), the most common indication for allogeneic transplants; plasma cell disorder (PCD), the most common indication for autologous transplants; and hemoglobinopathy, which has the highest transplant growth rate in this region, we describe the context of the adequacy of transplant medical services to the population.

Data were collected according to the transplant type of autologous and allogeneic, donor type, stem cell source, and disease indication using the APBMT format. As previously reported14, the APBMT counted the number of transplants as two for a patient who received transplants twice a year. If a patient received one transplant using more than one source of stem cells, the patient was counted as having one mixed transplant of bone marrow (BM) plus peripheral blood stem cells (PBSC), BM plus cord blood cells (CB), PBSC plus CB, or BM plus PBSC plus CB transplants.

Similar to our previous reports14, the transplantation rate in each country/region was calculated as the number of each type of HSCT per 10 million residents in 2017. The total population of each country was extracted from the United States Census Bureau report15.

All statistical analyses in this study were conducted at the APBMT Data Center. Since the data collected were only the number of transplants, the APBMT Data Center and the registries/institutes were not required to obtain informed consent from each patient. The APBMT activity survey was approved by the Aichi Medical University School of Medicine (2020-M025 and 2020-M026) and the APBMT Registry Committee. 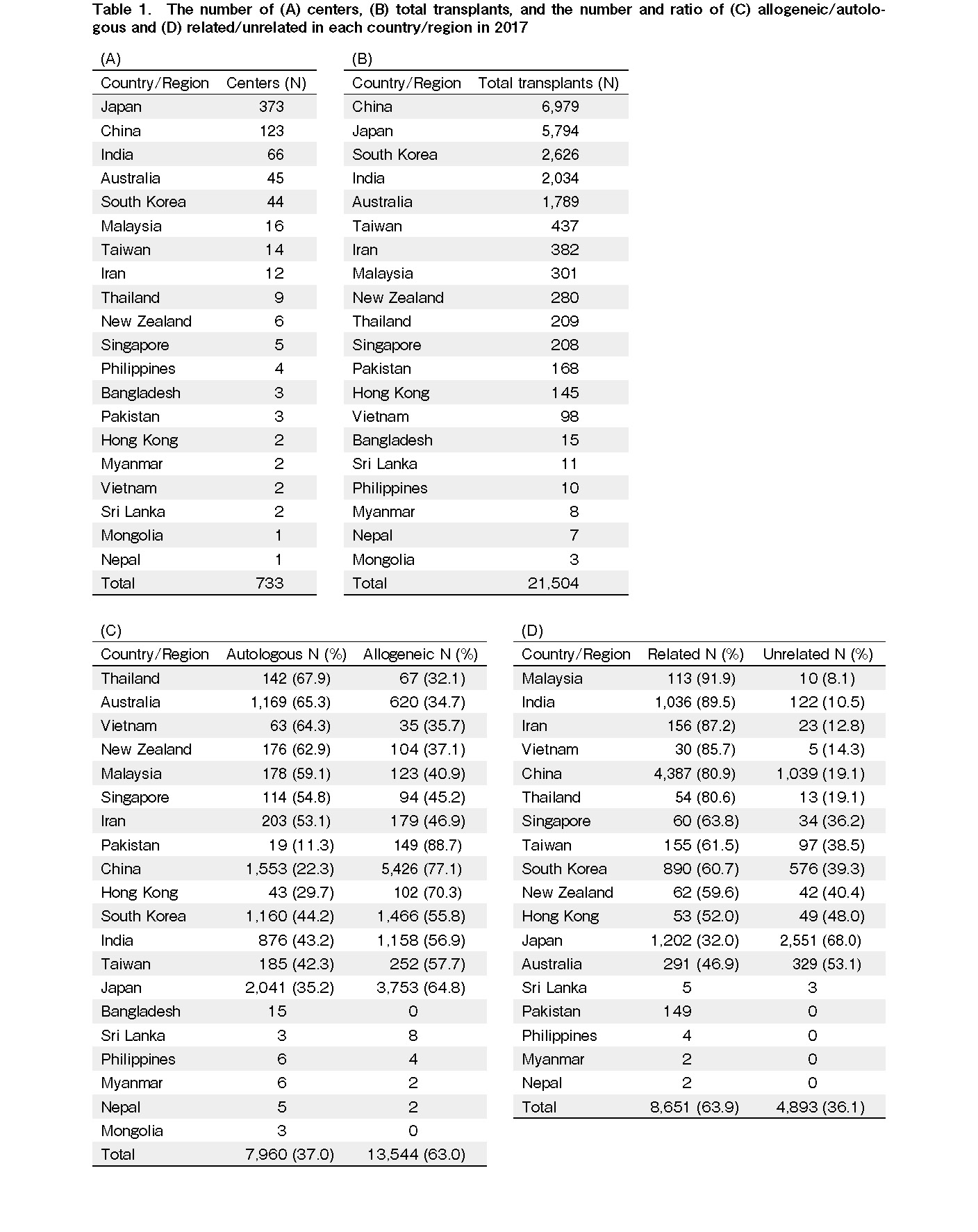 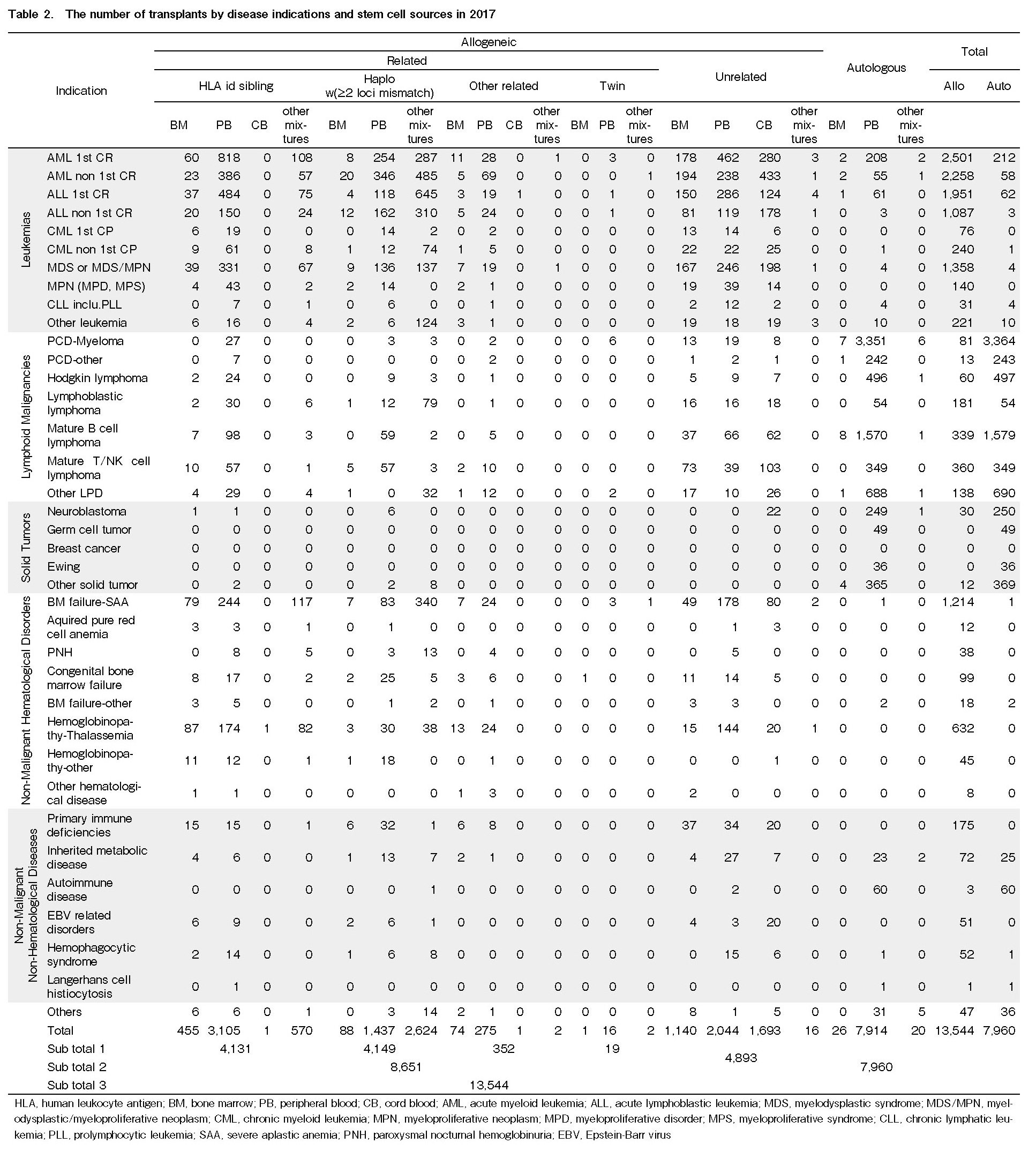 The number of transplants according to disease indication is listed in Table 2. The pie charts (Figure 1A and 1B) show the percentages of each indication for allogeneic and autologous transplantation, respectively. Main indications for allogeneic transplantation were AML (35.1%), ALL (22.4%), myelodysplastic syndrome (MDS), myelodysplastic/myeloproliferative neoplasm (MDS/MPN) (10.0%), severe aplastic anemia (SAA) (9.0%), NHL (6.5%), and hemoglobinopathy (5.0%). On the other hand, the main indications for autologous transplantation were PCD (45.3%), NHL (25.1%), solid tumors (8.8%), and HL (6.2%). More than 90% of transplants for AML (94.6%), SAA (99.9%), and hemoglobinopathy (100%) were allogeneic, whereas autologous transplants were predominantly done for PDCs (97.4%) and solid tumors (94.4%). Overall, the trends in the number of HSCTs for the six main disease indications (AML, ML, PCD, ALL, MDS or MDS/MPN, and SAA) have been consistently increasing since the 1980s (Figure 2A); however, those for solid tumors and CML significantly decreased in number around 2004 (Figure 2B). On the other hand, the number of HSCTs for hemoglobinopathy has steeply increased since 2006 (Figure 2B). Focusing on the increase rate of each disease indication compared between 2007 and 2017, we found that the fold increase in HSCT for hemoglobinopathy was the highest (4.4), followed by SAA (3.3), MDS or MDS/MPN (2.7), PCD (2.5), ALL (2.3), and AML (2.2). 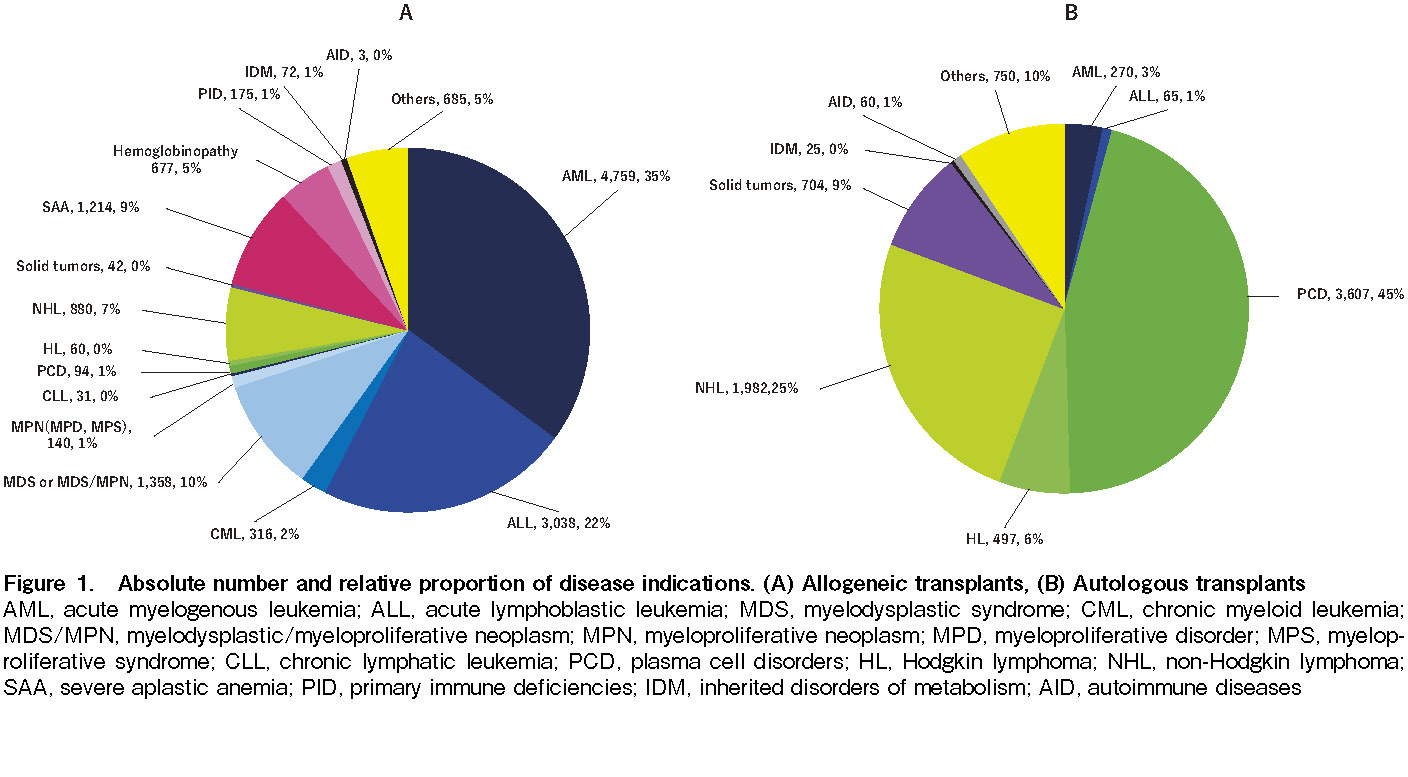 Transplantation rates of AML and PCD

Over the past decades, HSCT has become a part of the standard treatment of hematological and non-hematological malignancies, as well as non-malignant hematological diseases worldwide1–5, with many registries reporting their transplant activities in different regions6–11. The APBMT first performed a transplant activity survey in 2007 and reported its results in 201012. Since then, the APBMT has been annually conducting an activity survey and reported that the number of transplants exceeded 10,000 in 200813 and 20,000 in 201614. By the end of 2017, the cumulative number of transplants in the AP region since 1986 was 239,819, indicating a recent rapidly increasing growth rate due to the remarkable yearly growth in the transplant activity of China and India11, 14. In addition to the countries/regions that had >1,500 transplants per year, other countries/regions have also actively performed HSCT in recent years.

Among the many indications for HSCT, AML has been the most common indication for all transplants worldwide2, 4, 5, 9, 10 and is ranked as the top disease indication for allogeneic transplants for the past decade in this region. Recently, a variety of stem cell sources and donors have become available, and the selection of optimal stem cell sources to achieve excellent results for each AML case are actively investigated16–19. Compared to unrelated transplants, we found a remarkable increase in the number of related transplants for patients with AML, which reflected the increasing number of haploidentical transplants. In particular, Chang et al. reported that haploidentical allogeneic transplants for AML were the most attractive alternative donors because almost every patient can find a donor in China20. Our survey results also reflected this continued growth in transplant activity, in which a significant number of patients with AML were treated with haploidentical transplants in China11.

Similar to the rest of the world1–10, 21, the proportion of multiple myeloma in autologous transplants in the AP region has remained the highest for more than a decade13, 14 even in 2017. Recently, transplant outcomes of multiple myeloma have been improving by combining novel agents (NA), second-generation proteasome inhibitors, third-generation immunomodulators, and antibody drugs with induction therapy22. In fact, despite being a common disease in older patients, some reports from Europe and Japan, where aging is progressing, showed that autologous transplants for MM in that population were safe and effective23, 24. Thus, the number of autologous transplants for MM is expected to increase in the future.

On the other hand, there are significant differences between countries/regions in the Asia-Pacific region in the number of transplants for AML and PCD per 10 million population. China, India, Indonesia, Pakistan, Bangladesh, and Japan showed up on the top 10 list of populations by country/region in 2017; however, it cannot be said that sufficient HSCT services are provided according to the population except for Japan. In addition, Bangladesh, Myanmar, Sri Lanka, Mongolia, Nepal, and Indonesia just started their transplant program in 2015, and there are not enough transplant facilities in these countries. These facts are thought to be caused by the imbalance between the population and the resources possessed by that country/region and should be resolved to develop transplantation medicine in these regions in the future.

The prevalence of hemoglobinopathy varies significantly from country to country. Thalassemia is predominantly observed in the Mediterranean, Middle East, Central and Southwest Asia, India, and Southern China. Sickle cell anemia, on the other hand, is more common in Africa, the Mediterranean coast, the Middle East, and northern India25, 26. For this reason, the number of transplants for hemoglobinopathy is reportedly high in Africa, the East Mediterranean, and AP region1–5, 9. Moreover, there is a significant bias in the number of hemoglobinopathy transplants depending on the country/region. Although the number of transplants were prominent in China, India, Pakistan, and Iran in 2017, there have been few reports from East Asia, including Japan and South Korea, despite their many transplant activities.

Allogeneic transplants have been used to treat thalassemia as a curative modality since the 1980s27. However, the number of patients receiving transplants remains insufficient. One reason is that there are not enough facilities in the Mediterranean and Central to Southeast Asian regions to receive transplants. Another reason is the high cost of transplant28. Many allogeneic transplants for SCD have also been reported, showing improved results over the past 20 years29. However, similar to thalassemia, improving human resources and transplant costs for SCDs seem to be an important task, especially in disease-prone areas.

Many HSCTs are performed in the Asia-Pacific region; however, its total numbers are considered to be still below the required levels to provide optimal access to transplants for the large population in the countries/regions in this region. One of the reasons is that many countries/regions that have just begun transplant programs lack financial resources to increase the number of centers and transplants compared to advanced areas. These countries/regions may need financial and human resources, and educational support. To accelerate the HSCT activities in the developing countries/regions, developed countries/regions as a whole must cooperate, and APBMT works to support them as the registry, and the transplant activity survey is vital to clarify their results.

We sincerely appreciate all the members of the APBMT, especially the scientific committee members and their data managers, who gathered data in each registry, country, center, and hospital annually. We are also grateful for the cooperation of all participating teams, countries/regions, organizations, and their staff, especially for ABMTRR, CBMTR, ISBMT, KSBMT, JSHCT/JDCHCT, MST, and TBMT. This study was conducted by the APBMT Registry Committee and Data Center. We also thank Yukari Nakao and Hiroe Namizaki of the APBMT Data Center for their assistance. All centers contributing to the activity survey reported in this study (HSCTs performed in 2017) are listed in the .

MI, AS, and SO are members of the Editor of Blood Cell Therapy. They were not involved in the editorial evaluation or the decision to accept this article for publication.